Cyanide has set a release date for their Blood Bowl spin-off Dungeonbowl. The game launches on June 8th on their official store and will see a Steam release later in June.

The tabletop version was originally released in 1989 as an expansion for Blood Bowl, the Warhammer based fantasy (as in orcs and elves) football game. Like the original, Dungeonbowl pits the various Colleges of Magic and their sponsored teams against each other in a crazy turn-based-football-dungeon-quest mashup. Teams of Dwarves, Elves, Skaven and other Warhammer staples use teleporters to navigate the dungeon rooms in search of the ball, which is hidden in a booby trapped treasure chest. Once the ball is found, the first team to score a touchdown wins. 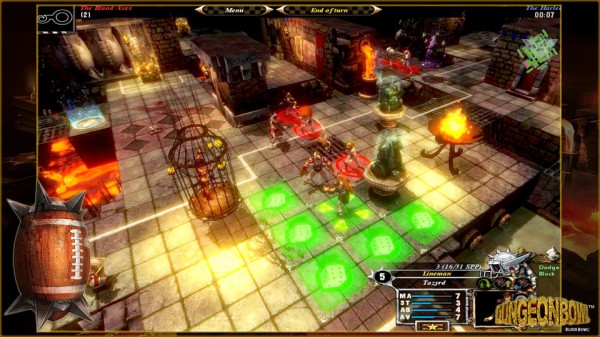 The Rose Bowl is for pussies.

If this game holds as true to its tabletop origins as Cyanide’s Blood Bowl, then you are in for a real treat. The game really is as crazy as it sounds. Also mentioned in the press release is a dungeon editor. Huzzah!

The starter pack for the game, which includes the core game, three colleges of magic and one environment kit will cost $14.99. Pricing for additional content has not been announced. If you pre-order the game on Cyanide’s store page, you will receive early access to the game on June 1st.