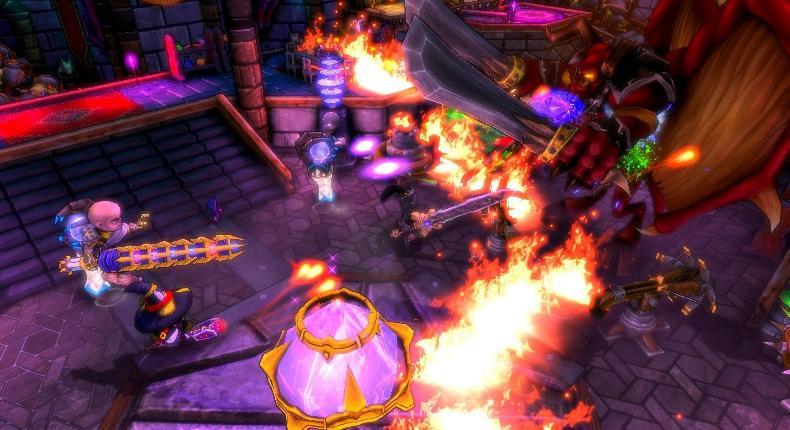 Back in October, I got sucked into the action/RPG/tower defense game Dungeon Defenders. While my dedication to the game ebbed and flowed throughout the jam-packed insanity of Epic Release Fall and the subsequent holiday season, it’s been a great game to fall back on and I’ve been happy to see that Trendy Entertainment has kept Dungeon Defenders filled to the brim with all manner of free and paid DLC. That being said, it’s very easy to get lost in all the content that’s been made available to players over the last 7 months, so I’m here to help you navigate the well stocked waters of Dungeon Defenders‘ multi-tiered content assault. In the words of Samuel L. Jackson, “Hold on to your butts.”

I’ll be focusing on the PC version of the game, so pricing and such will be based on the Steam Marketplace as of the time of this writing.

For those that may be new to Dungeon Defenders or anyone who hasn’t played it for awhile, the current state of the game is vastly different content wise from what the initial package offered. So much has changed that I personally don’t remember what was there to begin with outside of the 4 available hero classes (Apprentice, Squire, Huntress, and Monk) and the 15 levels of the base storyline. If you happen to like this genre, vanilla Dungeon Defenders is an incredibly rewarding game with seemingly endless gameplay possibilities given the multiple difficulty levels and modes as well as the unbelievable extent of the character and item customization. If you have the choice however, the PC version offers some content (like seasonal events) that the console versions do not. DLC seems to get to the PC a bit quicker as well but other than that the different versions are very similar (there’s also a version called Dungeon Defenders: Second Wave on the Apple store which actually plays very well and only costs about $4.99).

I really like the idea of seasonal events and I think Trendy has done a great job implementing them into Dungeon Defenders as a means of rewarding persistent players as well as developing a community vibe that is not unlike that seen in MMOs. Most of these events were free initially, but are now available for purchase at $1.99, though whether they are worth that price comes down to how into the game you are. They tend to have re-skinned enemies based on the overall theme and reward the player with new costumes or other gear for completion. Outside of that, they usually only offer one actual level/challenge so unless you’re really into having access to everything a game offers, you can safely avoid these should you miss the initial event. I have a personal fondness for Halloween, so I will naturally recommend the Halloween Mission Pack, but from a very subjective point of view (the pack also gives you a ninja costume for your Monk which you know gives me a boner). Some of these event packs do include access to 6 and 8 player maps as well as PvP arenas, so check into them if those types of things strike your fancy. 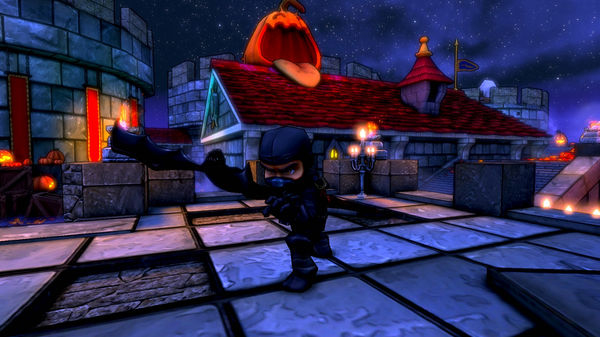 Monks are cool an all, but this game just really needed a ninja.

Outside the aforementioned event levels/challenges, Dungeon Defenders also offers a variety of other “mission packs” that range from new modes to levels that continue the story of the game. In my opinion, most of the available mission packs fit into the category of “nice but not necessary” that I mentioned above, with a few exceptions.

The Quest for The Lost Eternia Shards is a 4-part series that will expand upon the story and push you outside the familiarity of the castle/dungeons of the initial missions and into the expansive world of Etheria. The difficulty is ramped up significantly, so those that have been grinding for the last few months finally have a test for their super powered defenders. Additionally, while I liked the level design of the initial missions, the bricks and mortar mold has been broken which has allowed the design team to let their imaginations run wild. You’ll explore spider infested wilderness settings, desert towns and even an undersea fantasy land filled withSsharkmen. It’s tough to dissuade anyone from hanging out with Sharkmen.

Does anyone remember Street Sharks?

Should you buy the whole Lost Eternia Shards package, you’ll get access to all 4 levels as they’re released as well as a hardcore difficulty mode (which is pretty hard), the Karathiki Jungle Mission Pack and the Assault Mission Pack (which turns the table on the game and places you into the roll of the attacker, best for offensive character builds). These can all be purchased individually as well (at $3.99 for the Shards levels and $1.99 for the others), but you’ll save money buying them all together and getting access to hardcore mode is extremely important should you be a high level character.

Outside of this package, there really aren’t any of the available levels that stand out to me as a must play. The Warping Core Challenge Pack, while a unique take on the defense formula (the cores you protect move around) actually frustrated me since the strategies that got me through the game didn’t always work. I did purchase the City in the Cliffs Pack but that had a lot more to do with winning access to a cooler costume for my Series-EV hero. I think Trendy has a pretty good distribution model when it comes to DLC and while I think $1.99-$3.99 for levels is a decent price point for what is being offered, I do think there is an inconsistency in terms of what that buys. That being said, it’s all optional and the worst I can say about any of the levels is that they’re just ok, which is more than can be said for the post-release content of other games.

Above all else, the DLC I most looked forward too were the additional character types that were teased when Dungeon Defenders first came out. The 4 base heroes could all be adapted to varying play styles and could take on very specialized roles in the game but I was curious to see what Trendy could add to spice things up while not breaking the game.

There's more to us than our looks jerk!

The first character(s) made available were in the New Hero Pack which amounted to the opposite sex versions of the core group. When I first heard about them I was a bit fearful of the direction the DLC was going as $4.99 seemed pretty steep for reskins. In actuality the characters were more than that and had alterations in both stats and special abilities, which arguably made them distinct enough to stand out from their counterparts. This is definitely a piece of DLC that wouldn’t kill you if you missed it unless you like options or really hate the fact that women aren’t better represented in the core game.

The Barbarian and Series-EV characters are more along the lines of what I was hoping to see and prove that Trendy isn’t just releasing slightly tweaked versions of things we’ve already seen. Whether or not you buy them will have a lot more to do with how you play the game and not their inherent quality as both are pretty well developed and can make a dramatic impact on the battlefield, especially in multiplayer. 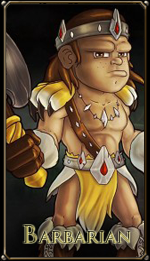 The Barbarian is Dungeon Defenders version of a berserker and actually doesn’t have any towers. This may seem counterproductive to the whole tower defense scheme of things, but his ability to dual-wield weapons as well his access to powerful stances (which imbue him with different buffs) make this the perfect compliment to any defense. Enemies, especially bosses die very quickly at the hands of this guy although it’s pretty tough to solo with the Barbarian so I wouldn’t recommend this character if you’re the type that doesn’t play well with others. The only real downside to the Barbarian is that there aren’t a whole lot of build options as he doesn’t have many role choices outside of being a high DPS character. He’s also not going to necessarily replace the Squire as the main tank tank as the stance that buffs his defense does drain mana so any tanking he’ll do will have to come in higher difficulty games when mana is abundant.

The Series-EV character is best suited for defense and utilizes laser-like beams that can inflict damage on enemies or enhance towers as well as setting up barriers that reflect projectiles or block enemy movement. The beams are created by placing nodes, which can actually be spread varying distances apart from each other at the cost of DU’s (defense units), thus allowing a player to close both large gaps and small ones for the same mana cost. When set up along a path, these beams are very powerful but Series-EV deals with the same issues that the Monk has with his auras in that they can be avoided entirely by flying/jumping enemies. This can be negated should you have enough skill points set up in attack power. The ability to equip two weapons that can be alternated more than makes up for any drawbacks as the character’s stat boosts inherent to both weapons apply to directly to character (outside of weapon specific stats that is). I personally love Series-EV and highly recommend it. 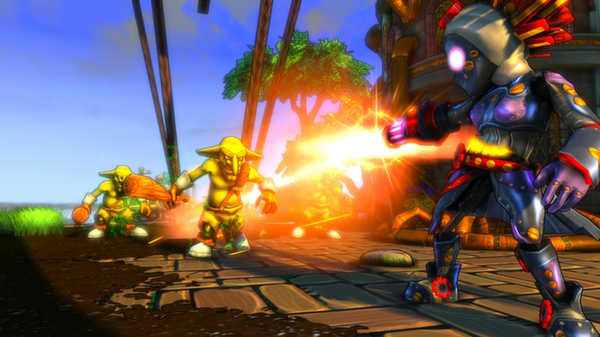 The Whole Package and Then Some

With a level cap that keeps rising (up to 83 now) and a flood of new content to always look forward to, Dungeon Defenders looks to be cementing itself as the go to multi-player tower defense game. While I can’t say that all of the DLC is a must have, nothing is garbage and the fact that everything is truly optional makes it become a question of whether or not you want to play this game for 40 hours or 400. With the final mission of the Eternia Shards coming here in the next few months as well as  two potential new characters (a Summoner and the rumored Jester), it seems that the content has only really just begun and will continue to improve as the fan base grows.

Recoil Review – Games evolve with updates over time and so do opinions. A postmortem review after the dust has settled on a game’s intial launch to see how the game holds up today.