Friday the 13th is the kind of day in which you triple-lock your doors, avoid ladders, run away from any stray black cats, and be vigilant for crazed maniacs in hockey masks wielding machetes. That last one is probably the most prominent problem on this unholiest of days. Rather than fearing the inevitable at the hands of the Voorhees mongoloid, I’ve decided it’s time to appease him with a proper remake of the  Friday the 13th video game. Let’s explore how to make this an experience you won’t forget. 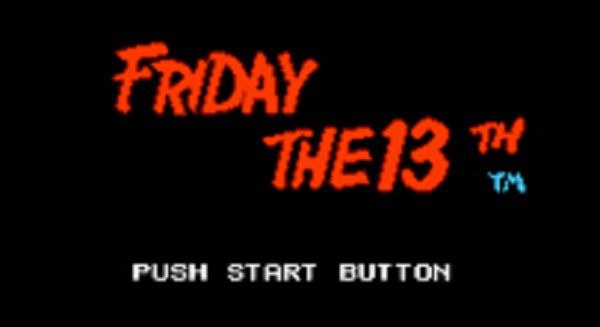 It's time to celebrate one of the best (worst) memories...

Keep What They Did Right

Back in the days of video game yore, on the NES, there were few title screens which could haunt you in broad daylight more than the Friday the 13th screen. The ominous keyboard synthesizer sounds made me fear the game of hockey and lakes for years in my youth. The title screen of the latest installment should go back to its roots, digitally enhance the sound, and blast its way onto your speakers or headphones to set the tone immediately for the death you’re about to witness or worse…experience at the hands of Jason Voorhees. Keep it. Use it. Exploit it. Don’t believe me? Press play below and close your eyes.

A True Game of Survival Horror

The game needs to embrace its ridiculous premise and audacity much like the franchise embraced the ludicrous notion of having 12 movies in the entire franchise. Rather than adding a serious tone the game should embrace that it is a game and flex creative muscles that video games can offer over movies. I picture this game as a downloadable title. It doesn’t have to be long, but it has to be fast, scary, and over-the-top with deaths.

The theme of the game is survival horror sprinkled with action, adventure, and the occasional puzzle. The survival horror is an obvious arc as you and other camp counselors are trying to survive relentless attacks from Jason Voorhees in the secluded Crystal Lake. The opening story sequence shows camp counselors and children dropped off at camp by a couple of buses. You witness a fun-filled camp experience. Enter the first body, and things stop being fun and it starts to get real. Miles out from protection, no cell phone service, you and your friends will be running for your lives the rest of the night. You must keep everyone alive, bring them back to one location, and survive until the buses come.

Collecting items and solving puzzles is part of the experience...

The game will have a third-person open world feel. Exploration and solving the mystery of Jason is part of the experience. Your only communication with friends and counselors is through walkie-talkies, and they alert you when someone is in danger. Different challenges are presented throughout the game. You may need to light fireplaces for light and warmth or get medicine for the ill. You need to find where all the counselors and children have split up and get them back to the cabin.

The death scenes in the slasher films are some of the most memorable, and the dead bodies of counselors need to be over-the-top to reflect that. Some weapons Jason used throughout the films include:  machete, knife, axe, harpoon, spear, javelin, bare hands, and nature (trees). The deaths must be memorable and almost tempting to not save certain people as your curiosity might try to talk you into just letting this guy die just to see what happens.

Horror is at its best when you don’t always know what’s going to happen. The original NES version included zombies to add obstacles. With proper pacing the game should challenge you with finding the counselors and children and bringing everyone to safety at the cabin. Part of the challenge is the glorified hide and seek game, but you will also be met with puzzles to access locked rooms, overcome obstacles, and sometimes elude Jason Voorhees himself. To pay homage to the original, Jason may attack your friends, but because you’re just a teen counselor fighting him head on really doesn’t make it about survival. To save your friends, and yourself, from his attacks you must evade, hide, and trick him to escape. To add a level of randomized terror, he can also attack you at random. He can come bursting from behind trees, closed doors, through windows, and any variety of locations to keep you on your toes. You can hurt him to slow him down to escape, but you cannot kill him…yet. 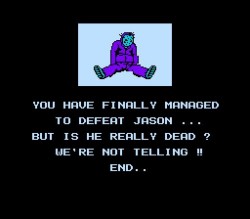 Jason Voorhees has proved one thing in our lifetimes and that is he is one hard bastard to kill. The game will be the same way. You have weapons to defend yourself, but you’re hardly a trained killer or fighter. You’re basic instinct is survival; however, at one point in the game you’re going to be forced to take him down. This standoff should require all the lessons you’ve learned for survival throughout the game and a little “that’s the last straw” mentality. After bringing everyone back to the cabin you’ll be forced for one last showdown to protect everyone before the bus arrives.

The epic standoff should allow you to creatively put an end to the attacks. Do you take him down with a weapon – albeit a machete or an axe? Do you drown him in the lake in a stroke of irony? Do you take him down another way? You choose through your showdown. Rather than locking you into a single location to take him down the final showdown should include the expanse of the camp. Different areas will include different ways to bring Jason down. However you bring him down, in true Friday the 13th fashion you’ll have to find out if he really is done or if he’ll come back for more.

It’s hard to appreciate Friday the 13th unless you grew up hiding under your bed or refusing to go to summer camp because the game and movies seriously messed you up. This remake can reintroduce the franchise in a fast-paced survival horror format which includes a number of gameplay elements which challenge gamers from different preferred styles. Over the top deaths, a secluded area, a sense of helplessness, and a killer soundtrack can create tension and a need to come back for more. It’s time to give Jason Voorhees the game that treats him like the icon he is, and I think we can do it right. He’ll still kill you for it, but I’m sure if you listen closely you might hear him whisper “thank you” before the screen fades to black.

What would you do for the game?

1 Comment → Remake It So: Friday the 13th: The Video Game