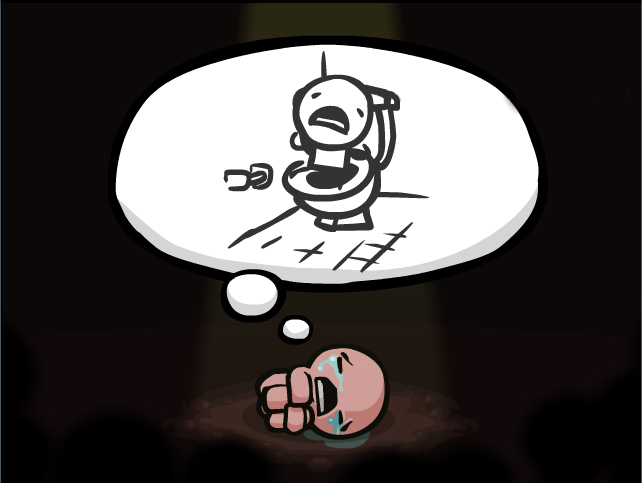 Indie games have not really been a part of my gaming repertoire due to various reasons: most of them being couch-lazy. I prefer the console, and I spend many nights in the dark with my cocktails playing online with my friends on Xbox LIVE. Out of the Horrible Night staff I am probably one of those who have played the fewest indie games. So one night, after deep soul-searching and leg stretches, I decided to pick up The Binding of Isaac and alter the course of evolution. 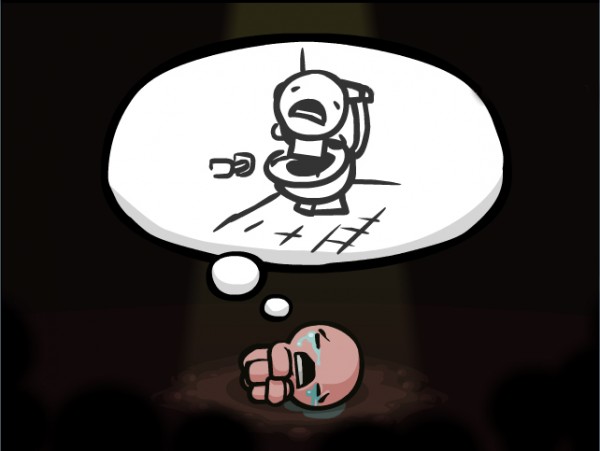 I feel for you, little bro. Literally the same stinkin' nightmare!

Been a long time, old friend

In college I had both a console and PC that I regularly played when I was done pretending to read, and I favored playing games in LAN parties with my friends. I usually prefer strategy and simulation on PC as I can do so much more, but what brought my attention back to The Binding of Isaac wasn’t that I could have a legitimate excuse to dust off the mouse and keyboard. I have great memories of games like The Legend of Zelda in which playing from a top-down view, searching caves and labyrinths, and killing some baddies. This was almost like rehabbing two legs who forgot how to walk. It’s been so long since I’ve used a keyboard to really play a video game I knew I was in for a challenge. The Binding of Isaac’s ease of entry made it a suitable target. 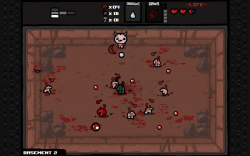 The horns on my head do nothing to dry my tears.

Before I even played the game I knew I was going to be in for a treat. The humor of the game is off the charts for demented minds, and I seemed to make a firm handshake with lunatic who put the story together. Poor Isaac and his mother. If you don’t know, Isaac’s mother is off her rocker. She believes God is telling her to kill Isaac (after she locked him up in his room and took away his clothes). His only escape was a trap door into the basement. Silly Mother. Doesn’t she know that dark basements are in the top 5 scariest places for young children before you decide to kill them? I digress. No matter how grim the story sounds by my description, the artwork and humor sprinkled throughout brings a smile to my face and made the game already enjoyable before actually playing.

Naked. Alone. Scared. This is how any little boy, and myself for that matter, would feel in a dark basement knowing your mother is up above ready to stab him. The only natural response at this rate is crying, and it turns out crying is your best defense as tears are your weapon. Genius! There have been times in my life I wished projectile tears could do away with my enemies and things would get better. In this case, I can live out that fantasy except for the part where things don’t get any better for Isaac. They get worse. The game got incredibly difficult in some areas. More and more rooms in the basement appear and with new rooms comes new challenges. The crying just keeps coming.

That's a lot of red!

I also liked the different items and power-ups you could find which make the tears come harder, faster, or bigger. The whole time I played I pictured geysers of tiny little tear daggers ripping through the various enemies of the basement below. Part of me wondered how Isaac could keep going with such a loss of bodily fluids, but then after dispatching a waterfall of eye justice those concerns were washed away.

Overall I’ve been very pleased with my decision to try something new. The game is fast-paced, random, funny, and very entertaining. If I have only 20-30 minutes to kill I just sit down and cry my way through my virtual basement and caves. It also has opened my eyes to the great quality indie games can produce, and it further proves my theory that you don’t need a big budget or great technology if the game is truly fun. That’s the point of a video game. Entertain me. I enjoyed my time with The Binding of Isaac so much I decided to download the soundtrack too. It’s very good and creepy. Just my style.  So I’m happy to report that I tried it, and I liked it. Overall, I went into the dark basements of The Binding of Isaac and came out a better person. At least I like to think so.