After taking last week off and regrouping, we have a strong topic for you. 2D games have seen a resurgence of late and over the past two weeks we’ve been discussing what’s going on. And we’d like to share it with you. Here was the source of inspiration for this topic: The Revenge of 2D.

Ever since Super Mario 64 came out, games have been taking place in more 3D environments than 2D. However, at last month’s E3 2D games had a huge showing, proving that the 2D style still remains a relevant one in the gaming world. With the success of New Super Mario Bros. Wii, Nintendo has decided to bring back some of their most famous franchises, Donkey Kong and Kirby. They both will play like their games of old, on a 2D plain. This is the right choice for Nintendo to make. NSMBW was a really great game that showed us that new things can be done in an old-school sort of way. I don’t know if I would want to play a Donkey Kong or Kirby game if they switched it to 3D, but I am definitely interested in those two games now. How excited would you be if they said, “Well, we don’t know what to do with the Zelda franchise in 3D anymore, let’s take it back to the way it was.” I, for one, would welcome the change. 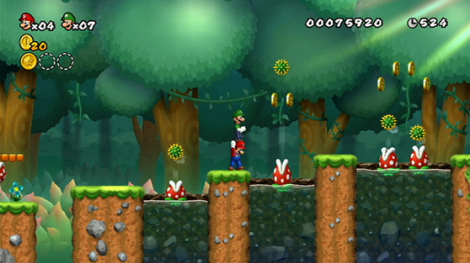 I’m just thankful that Nintendo is big enough to support 3D and 2D versions of their games so we don’t have to choose. The resurgence of 2D has been a lot of fun the last few years. I do wish that the 2D versions of the games would be available on multiple platforms though. I’ve always felt like if I could take a 2D Castlevania on my DS to the Wii and vice versa, that I’d get a lot more mileage out of it.

I think though, I don’t need the simple 2D games anymore. If the art style calls for it like Kirby’s Epic Yarn, then great, but I’d really like to see more “2D” games like Shadow Complex and Bionic Commando Rearmed. 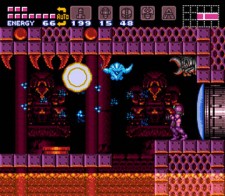 One of the standard bearers.

I’m surprised it has taken this long to get a few decent 2D/3D games with sophisticated graphics. I’d like to see Nintendo take a few of their franchises in this hybrid direction. Ok, I’m just asking for a new Super Metroid. That’s all I really want since Metroid Other M isn’t looking too great.

I think Other M is looking pretty sick myself… I guess we’ll see when it comes out! I agree that I’d like to see a lot more games like NSMBW, Shadow Complex, and BC: Rearmed. There’s something just kind of nice and refreshing about going back to a simpler, d-pad friendly, 2D environment. For the first time in a long while I’m actually looking forward to what Nintendo has on the horizon more than anything else. (That includes the 3DS, but still…)

I agree with the thoughtful analysis in the article about the complexity that 3D environments bring with more difficult controls and camera angles and more room for user flubs. I’m pretty sure that’s why you’ll never see my wife and me playing Mario Galaxy or any other 3D game together. It’s really frustrating for someone who doesn’t play games regularly to sit down and try to play something that complex. It’s like trying to enjoy 18 holes of golf when you play once every three years. I have to think that plays a big role in the success of NSMBW. You don’t really have to be a regular gamer to pick that up and play.

There are certain games that we can probably all agree that are simply better off in 2D, like Mortal Kombat and Sonic, and suffer when they are forced into a 3D environment. They were great the first time we played them, and the reason they were great is because the games were technically limited to 2D, and so were designed and tested for 2D. We could probably say the same for 3D games. Halo and Call of Duty, for example, would not migrate well to 2D because they were imagined and created with 3D in mind.

Other companies aside from Nintendo (EA, Sega, Warner Bros/Midway, etc..) are realizing this a bit late – probably, in some form, a response to Nintendo’s 2D success with the NSMB games on DS and Wii. I’ll be interested to see how Mortal Kombat, Sonic, and NBA Jam do in the charts now that they’re going back to their 2D roots. 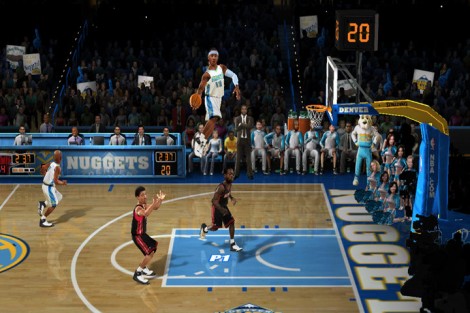 As an avid browser gamer, the 2d style is a stalemate of freshman game creators and allows highly creative experimentation to take precedence over the challenges of programming within a 3d enviroment. Games such as Coma, Crush the Castle and a myriad of others found on browser game sites still ooze playability and fun without the need for too much glitz. It’s always interesting to see how a 2D designer compensates for the lack of “modern visuals” in order to reach a larger audience.Whether its art style or gameplay, I see the 2D platform as a testing ground/launching pad into modern gaming territory but there are examples of 3d games actually going backwards and finding a home in two dimensions. Some of the mainstays of Newgrounds and other similar sites have gone on to create masterpieces of 2D gaming and have been the link between casual and hardcore gaming.

Interesting pattern you noticed. Casual/simple 2D, to hardcore 3D, back to hardcore 2D. Developers get their start in 2D, so does that make them always wish to go back to their glory days when they’ve moved on? Are these games actually more for the developers or perhaps a means of companies like Nintendo to grow new developers from their roots? I just wonder how and when in the process that Nintendo decides whether or not a game should be 2D or 3D these days.

I do challenge anyone that says a franchise is better off in 2D vs 3D. Granted, you are right about Mortal Kombat, Pixelmixer.

This is how you do a remake.

However, with some ingenuity and game examples like Shadow Complex or Bionic Commando Rearmed, I’d be curious to see a 2D take on Halo. You really don’t have to look any further than Metroid to see how either could work.

Castlevania is definately an example of 2d to 3d conversion that didn’t quite live up. The 2d versions are still going strong on the handhelds and Symphony of The Night is yet to be dethroned as far as side scrolling action games go. Metal Slug is another example of a game thats 3d incarnation can’t possibly be as good as the 2d, all though I haven’t played it since it was only released in japan. 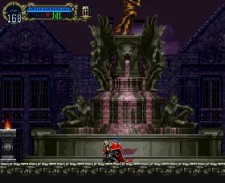 The other 2D standard bearer.

Reading everyone’s opinion has gotten me really pumped up for the possibility of new 2D/3D games. The New Super Mario Bros. series is the standout for sure, but I really want to see more games go in this direction. I mentioned taking Zelda back to a 2D plain, but what other stale games could use the retro-ing? I think Metroid: Other M is a good idea, I to am skeptical about if it will work or not. If they made Metroid like Shadow Complex, would anyone really complain?

I hate to ask for all these games to be made back in 2D because what if what we remember so fondly about these games is that they are just memories. Talking about Star Wars: Shadows of the Empire recently made me realize that the fond memories I do have for that game can’t match up to the way it actually plays. Do you guys have any games like that in your play history?

Games with better memories than actual gameplay? I might have to say GoldenEye there. When it was new and awesome and I was good at it, it was the greatest game ever. It will always be a milestone in gaming for me, but the last time I tried to play it I just couldn’t do it. The controls were so crazy from what I’m used to now that it didn’t even seem worth it to re-learn. It still holds fond memories, though. 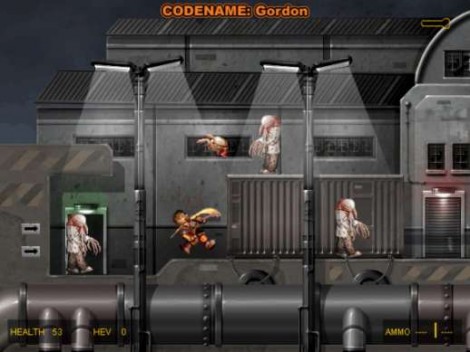 I’m sitting here trying to think of a 3D game that could use some 2D-ification… it’s making me think of that 2D Half Life game, Codename: Gordon. Anyone ever play that? It was a pretty decent little game, really. It was definitely a Half Life game… and it worked, I thought. What else would be a good candidate for something similar??? ……. hmmm…….. Maybe a better question is what wouldn’t work in 2D? …. well… Team Fortress might be kind of lame in 2D…

I tried to sit down and think of games that really work well directly ported between 2d and 3d. My biggest revelation is that RPG’s are almost entirely platform independent. A Zelda game works great in 2d and 3d. Pokemon is another RPG that could easily jump back and forth between 2d and 3d without effecting the gameplay quality. You can probably name almost any RPG out there and imagine it on other platforms. 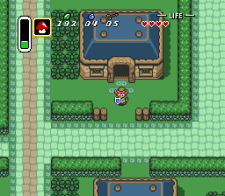 Personally, I think this is why RPG’s are so successful, we could even turn Zelda into an ambiguous experience and have the same game (same story, same locations, etc..) be successful as a 2d game, a 3d game, a text-based game, and even an analog RPG.

One thing we need to note on games like Codename: Gordon that are “remade” in 2D is that the gameplay changes, the levels change, and the story often changes to better fit a new medium. So by remaking the game, it isn’t necessarily an exact copy of the game that is being remade, but more of a derivative work of the original made for a new platform – which inspires an all new experience and hence makes it difficult to compare to games that try to imitate all the original gameplay on the new platform.

I agree with Dustin. The most successful transitions from 2d or 3d (or vice versa) have been when games take the source material, story, and universe from the original, but change the gameplay to fit the dimension. That’s what made Ocarina of Time so great was that at it’s core it was Zelda, but they redefined 3D gameplay. On the other hand, you see a game like Bionic Commando that just wasn’t fun to play in 3D because the gameplay was executed poorly. The point is, you can’t just slap a skin on an existing 2d/3d engine and expect it to work.

We are all for games being in 2D as long as the game calls for that style. It will be interesting to see where the video game industry goes from here on out with these upcoming 2D releases. I for one, hope they will drive further development in franchises that have grown stale over the years.