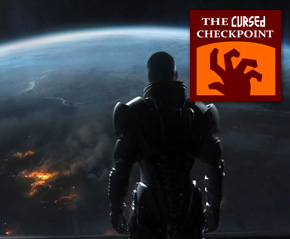 Not content with just a singular review of Mass Effect 3 on HorribleNight.com. Brandon, Justin and Aaron take time to reflect on their own space adventures and decide if Mass Effect 3 is a must play or nice-to-play game.

Mass Effect is an epic sci-fi adventure that has spanned over 5 years, and the level of detail is so deep you can play each game over and over again and still come out with something new. Mass Effect 3 has been lauded as the conclusion to the story of Commander Shepard, and with new features like multiplayer it was unclear if the trilogy was going to stay on course and end satisfactorily for die hard fans. While we have run an official review of the game, there’s room for many different opinions on this major game and franchise. We brought in three different Mass Effect 3 players with different stories and experiences to determine if the game holds up and should be played by both new and experienced players to the franchise.

This episode is for experienced Mass Effect players wondering if they should finish the story in Mass Effect 3 and for new players who don’t know if they should start on this installment or go in a different direction. In that regard we have kept this episode relatively spoiler free and we do not discuss the details of the ending directly. Look for a future episode on that topic.