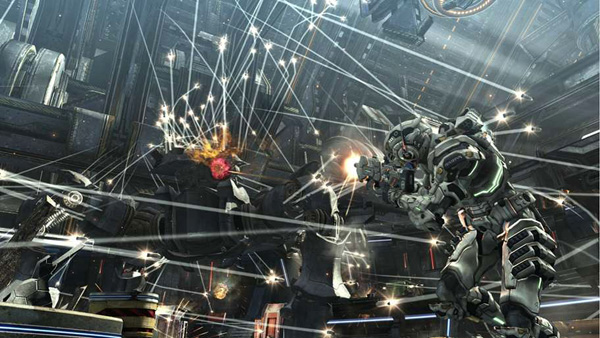 Ever since the Locust Horde invaded Sera, it redefined the 3rd person shooter genre and introduced to us a tactical shooter that set a benchmark for games to come. Many since then have played off of this cover-based mechanic, each adding their own twist. Some were successful, while others crashed and burned with fist bumps and air guitars. Developer PlatinumGames brings us their fourth title, Vanquish, which can best be described as the secret love child of Gears of War and Crysis.

You play through the game as Sam Gideon. You’re a cocky DARPA agent with a stolen, juiced-up super soldier suit, who’s trying to save the lovely people of New York from getting blasted to hell with a giant solar ray. If you’re familiar with Crysis, then you’ll easily adapt to your ARS (Augmented Reaction Suit). It has the same deal where any power you use will drain your suit’s energy, so you need to be somewhat smart about how you use it so you don’t find yourself away from cover without enough energy to rocket boost your ass back to safety.

Did someone say rocket boost? Yes! This is probably one of my favorite features of the suit. It’s completely ridiculous, but you can rocket slide across the ground and just do laps around the map. As long as you stop right before your suit overheats, you can wait a few seconds and go for another round. It really never gets old sliding and shooting. If you’re ever in a tight spot it’s a sure way to get out of the heat and back into safety. 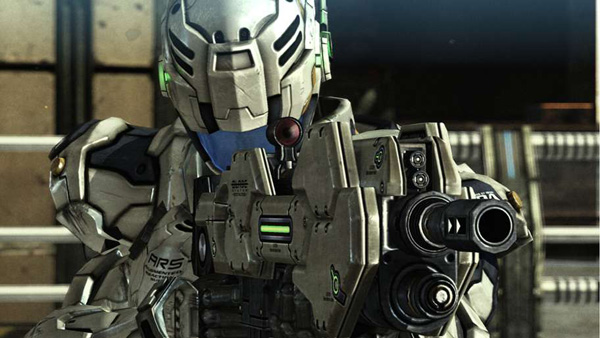 Meh… I guess these work.

The weapons aren’t anything special but they get the job done. You get your basic assault rifle, heavy rifle, sniper rifle, shotgun, and rocket launcher that almost every shooter has. They added a few unique weapons like the disc launcher which shoots what appears to be giant saw blades that I never really seemed to do too much damage with. The LFE Gun fires a huge ball of energy, however it was so slow that I never bothered with it unless I was looking at a giant group of enemies about 2 feet in front of me. The Lock-On Laser can lock onto up to 8 targets at once, making it excellent for crowd control, and then you have your typical grenade as well as an EMP emitter that temporarily shuts down the enemies for a short period of time.

I’m a fan of how Vanquish incorporated a leveling system for your guns: you’ll randomly find upgrade points where you can pick a gun to level up. You can also upgrade a gun by picking up a gun that you already have full ammo with. A few of the guns were pretty useless at their base level, which is probably the point, but it doesn’t take too long before you’re a powerhouse that can’t be stopped.

As far as the control and movement, Vanquish was pretty smooth. Maneuvering in the ARS felt natural, and aiming was a breeze. I never felt like I was fighting the controls to get through an area. This is pretty important because with everything that’s going on, you don’t really have a lot of time to stand up and shoot at your own leisure. Unlike your typical cover-based shooter, the pace is actually much quicker, like that of a corridor shooter. There is never a shortage of enemies and mini-bosses to destroy. Despite the chaos that surrounds you, once you’re feeling a little confident, you might even try taking a smoke break. It’ll distract your enemies and help you score an achievement as well. 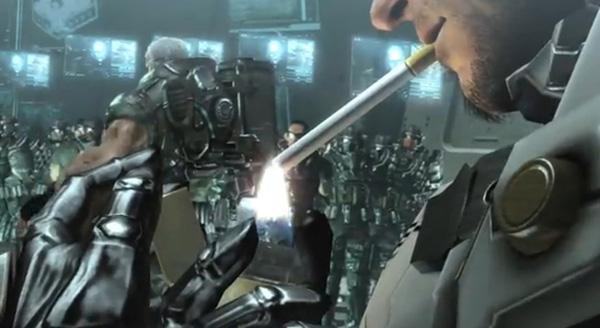 Unless you take the time to work your way through the training exercises, Vanquish doesn’t care to ask for your name before you’re blasted with more action than a Michael Bay anime. I was somewhat overwhelmed at first. I had a brief, “WTF am I supposed to be shooting at?!” moment while trying to absorb the intense action that was happening in front of me – bullets were flying, things were exploding, friendlies were dying, but if I brought one back to life with an epi pen he’d spew up a gun for me. Ok, well not exactly, but where else could he be storing that extra gun he give me? Anyway, it doesn’t take long for you to realize that people are friends, shoot the robots. It’s plain and simple.

Level design is an area where Vanquish completely surprised me. The areas were large and well thought out with a ton of detail. The variety of level types kept things interesting and helped dodge repetition. The creativity behind how some of the environments moved around you was refreshing, unique, and added just the right amount of polish to what was working up to be a fantastic game.

Have time for a quickie?

Vanquish is extremely story driven. It isn’t a particularly memorable story, and the voice acting is pretty terrible, but Director Shinji Mikami (Resident Evil, Devil May Cry) did a great job at making it seem almost movie-like through the short 5 or so hours that he keeps your attention. There were quite a few cinematic cut-scenes to set up each chapter and move the story along. On the negative side, the game almost relies on them a little too much. There are times where I felt like I was watching more than playing, but everything is so action packed that it almost doesn’t matter as long as the adrenaline keeps pumping. Oh, and if you’re into this sort of thing, the camera guy is definitely into your hot, American accented, Russian, combat handler Elena. More times than not, when she’s talking you’ll be trying to sneak a peak up her dress. 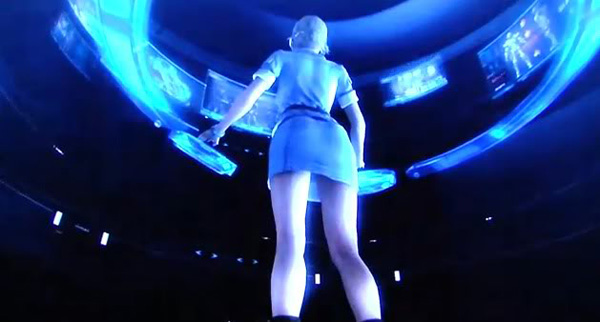 In the end, Vanquish succeeds by embracing exactly what it is. It’s a video game. From start to finish, it delivers non-stop entertainment with a fluid gameplay experience. If you’re looking for a quick win, I can’t recommend this game enough. Sure, it has its shortcomings, but it succeeds where it needs to and I think you’ll find yourself satisfied.

Author’s Note: So, you’re probably asking yourself why I’m reviewing a game that is over a year and a half old at the time of this writing. I don’t have time to play every game as soon as it comes out. Vanquish completely blew past my radar when it released, but once I heard “Gears with robots,” it definitely piqued my interest. The price tag only sealed the deal. Sure, the game is super short. If I had paid $60 for it on release day, I would’ve been as upset as anyone who paid full price for MW3’s single player campaign. But honestly, if you haven’t given it a chance it is totally worth the $15-$20 you can pick it up for these days. It’s insane, non-stop action that’s a quick win in-between your Skyrim and Mass Effect 3 sessions.