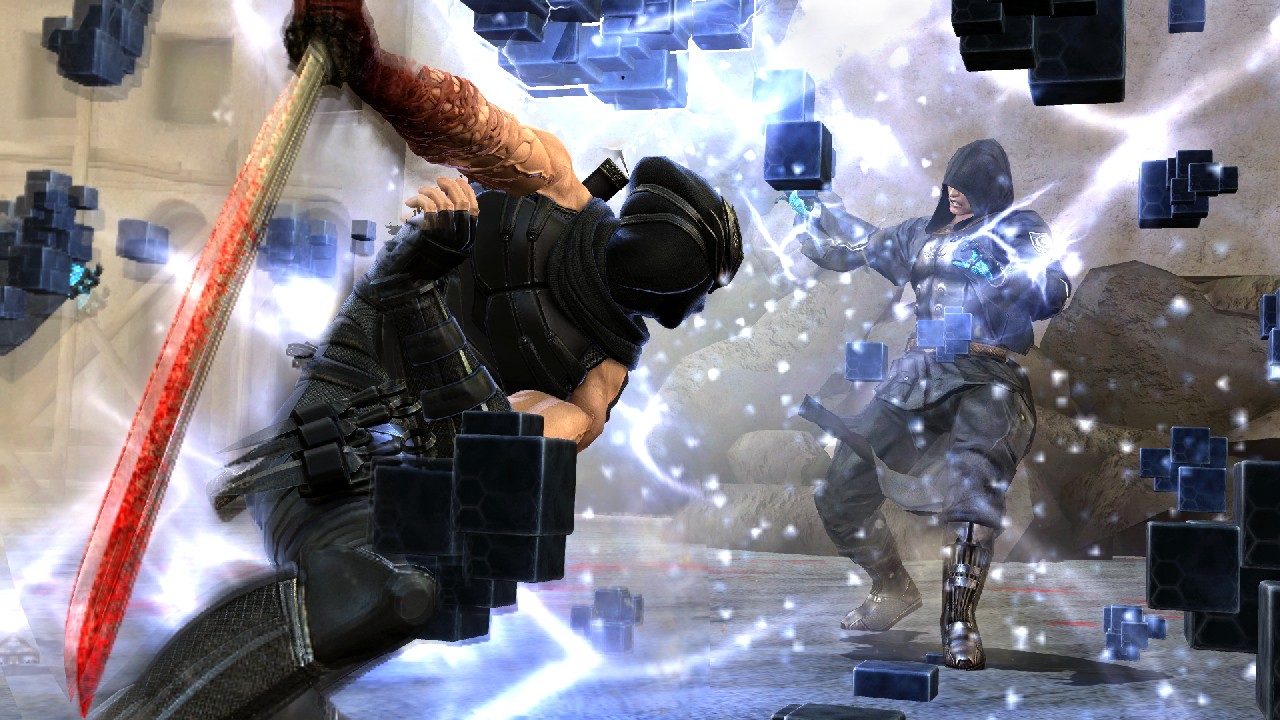 Ninjas are one of those warriors that seem destined for blood baths and almost-certain victory. They’ve been pit against pirates, mutants, and even each other for decades and have yet to go the way of the dinosaur (which I assume were made extinct because of ninjas). The Ninja Gaiden series is what I imagine an interactive documentary of these silent assassins might be. The challenges they face after their years of intense training would more than overwhelm the average controller-gripping man, but victory is obtainable for those of us who display a strong understanding of Ninjitsu. If past Ninja Gaiden games are the Encyclopedia Britannica of what it means to be a ninja, Ninja Gaiden 3, unfortunately, is How to Ninja for Dummies.

A week in the life of a ninja

Ryu lives in a world where people sell helicopters to weirdos like this.

The plots found in recent Ninja Gaiden games have always leaned towards the absurd, blending shinobis, mythical creatures, robots and demons together in a milkshake of blood and insanity. While Ninja Gaiden 3 doesn’t break the trend, it attempts to develop main character Ryu Hayabusa as a man dealing with a curious need for family and his unavoidable hobby of stabbing dudes. I’d be lying if I could repeat back what exactly happened throughout the brief journey without pausing to reflect on if any of it made sense. The gist is that there are bad people who want to cleanse the world of everything and they hate Ryu, so a curse is put on his arm. By the time the credits roll, the question of whether Ryu is just a sword-wielding super murderer is summed up in a couple of sentences and everyone’s happy. Well, everyone except for myself, having realized that all the flashy blood-spilling moves I performed did little to lead to that conclusion. Ugh.

For the most part, Ninja Gaiden 3 plays out just like the two before it: Ryu enters an area, enemies jump out and, if Ryu is the last thing alive, he proceeds onward. Ryu is equipped with a limited arsenal of sword, bow and shurikens this time around, quickly leading to a feeling of deja vu. It’s a shame too, since the basic idea of combat can be fun. Blocking and keeping on the move is essential to survival and, when certain attacks land, they land hard (thanks to frequent uses of short quick time events) and the reward is a spray of blood. Ryu can also unleash ultimate attacks when his arm is glowing, automatically dispatching a number of enemies. In older games, this kind of move could prove useful when a battle started to go sour. Here, this move just highlights one of the main problems of the combat: there are way too many enemies. Enemies constantly chatter about needing back-up and almost every battle in the game overstays its welcome by having new foes jump over walls, walk out of doors or simply decide to exist  just to keep Ryu fighting for minutes longer. If I had kept notes on how many times I commented on more enemies joining a fight, my hands would have been covered in blood and blisters by the end. Double ugh. 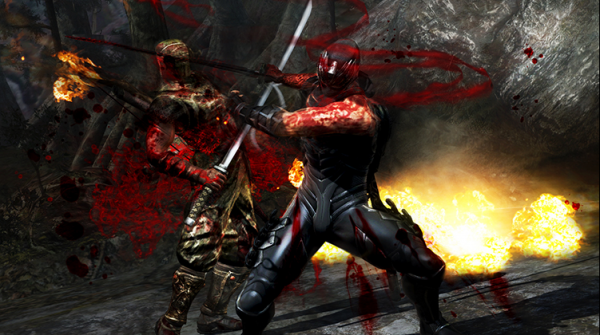 Red is totally in this year. And out.

It’s a real shame, as a Ninja Gaiden fan, to count up all of the interesting mechanics that Ninja Gaiden 3 discards. Gone are the amputations and decapitations, making most battles less about strategy and reaction and also keeping the gore factor more in PG-13 territory. Not having access to a wild variety of weapons takes away from experimentation. I tried my best not to button-mash my way from start to finish, but even the in-game move list was just a series of light attacks and heavy attacks that all looked the same. Combos don’t seem to be nearly as important, having the ability to throw shurikens is oddly useless and I don’t believe I was instructed once about the ability to counter attacks. Not that it mattered, because it was about as effective as releasing the block and dishing out light attacks manually. Even bosses succumb to the simplest tactics. As a whole, Ninja Gaiden 3 feels like a couple of somersaults backwards from what I’d grown to expect from Ryu’s adventures.

Can’t do this blindfolded

When a game is about precise movements and overcoming challenging odds, the controls really need to be as perfect as possible to minimize the chances of error. Don’t put your “relief face” on just yet, because even that side of Ninja Gaiden 3 is wanting. I would constantly not be able to move Ryu out of harm’s way due to some kind of input lag or being stunned. I often had no control of which enemy I would attack while surrounded, resulting in several weakened enemies landing a few more cheap shots. Countering continues to require precise timing, so I found myself never relying on it when I couldn’t keep track of Ryu’s location due to large crowds and disorienting camera angles. Long-range enemies need to be quickly defeated by bow and arrow, but respawning melee attackers don’t want to cut you enough slack to ensure lock-on accuracy. I even got stuck in a wall for a few minutes once.

The action is broken up by climbing sections that require alternating use of the trigger buttons to scale walls, but most instances of these fail to elicit any kind of excitement. In fact, one of my fingers was sore from holding the trigger to block so much, I just dreaded having to do it at all. On harder difficulties, all of this compounds into a whirlwind of frustration and sadness, becoming such a waste of my time that I had to tone it down to normal just to stop punching my furniture. Triple ugh. 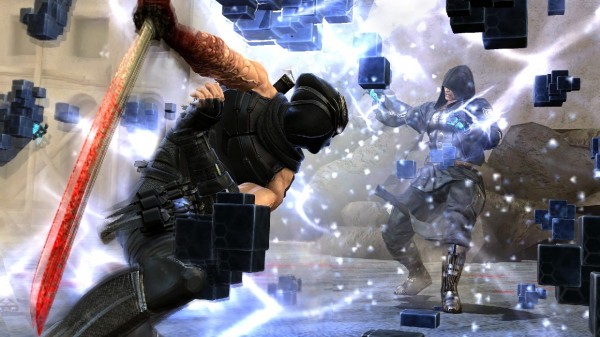 Some enemies are slow to upgrade their magic past 8-bits.

If there’s an aspect of Ninja Gaiden 3 that is less likely to frustrate, it’s the visuals. The game looks fine as Ryu hops around the globe in black spandex to varied locations for whatever reasons and I didn’t notice any slowdown. Nothing is likely to stay in my memory as a sight that needs to be seen, but nothing truly offends either. The soundtrack is the same way as the music is just kind of there, hidden behind the looping noises of enemies and explosions. Seriously, I must have had the enemies remind me a hundred times that “killing is their business” and, as a dog owner, the sounds of German Shepherds in body armor dying over and over started to bum me the hell out. In fact, all of the voice acting is either exaggerated or melodramatic. I just wasn’t feeling any of it this time.

Sadness is a lonely throwing star

Killing with a friend... is still killing.

It’s worth mentioning that there are a couple of multiplayer options available in the forms of cooperative trials and competitive battles. If you’re lucky enough to buy the game new or don’t mind setting $10 on fire to get an online pass, you can partake in these festivities and level up a generic customizable ninja into something more capable. The trials are probably the most playable part of the package, sending waves of enemies in and rewarding players who can satisfy bonus objectives like killing an enemy with the bow and arrow. Since I was not an owner of the pass, I was only able to play the trials alone and those felt familiar to what the story had to offer. After finishing the story, I can honestly say I had no desire to want to cut through a thousand more enemies.

It’s been a while since I’ve been genuinely disappointed by a game, but Ninja Gaiden 3 really made me ask more important questions than if Ryu is a murderer or not. Why does this game feel smaller than the last one? The lack of weapon variety and dismemberment quickly leads to repetitive gameplay. Why is normal difficulty too easy and hard difficulty masochistic? Though the prequels were much harder overall, I was eventually able to finish them through perseverance and honing my skills. Who was this game designed to please?  It oversimplifies the Ninja Gaiden formula, lacks the grand scope of the God of War series and comes off as a bargain bin imitation of what makes the action genre fun. Half of the time, I was able to take amusement in what I was doing, but then it would all fall apart and I would go back to sighing. If there’s a nice thing I can say about Ninja Gaiden 3, it’s that it is a playable video game with tons of action that anyone could pick up. The problem is that there’s a lack of depth and very little reason to care about the trails of blood running behind Ryu Hayabusa this time.

At the full price of $60, I just can’t recommend Ninja Gaiden 3 to anyone. At the more playable normal difficulty, it’s over in a matter of hours. Even if it were longer, the gameplay has been trimmed lean when compared to prior entries. Taking a ninja online is more of the same, mixed with the fact that the community surrounding this game is on the small size. Fans of Ninja Gaiden 2 who are still curious about Ryu’s journey should only look into this third outing when the price is $30 or less. Even newcomers can’t go too wrong for that price. It might not be a shining example of ninja action, but the sword was still sharp enough to surprise me sometimes. Value score: 2/5