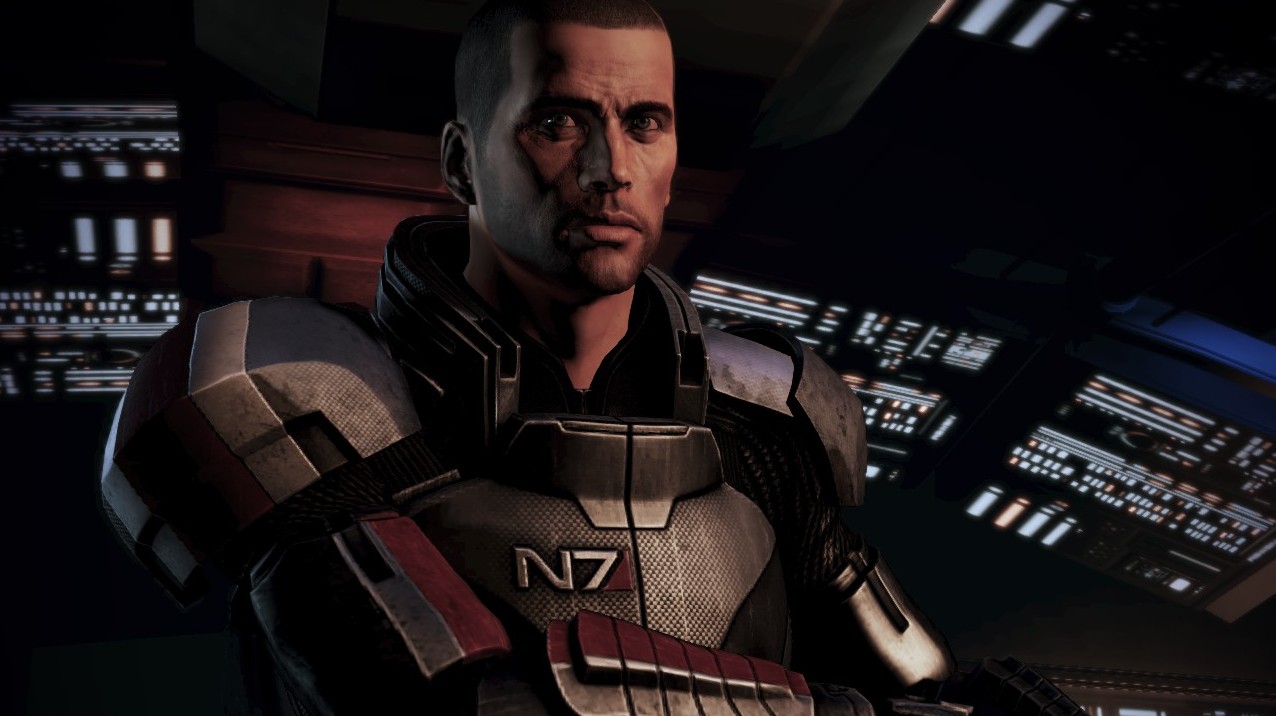 BioWare brings its epic trilogy to a close with Mass Effect 3. The series is well known for its unique blend of shootin’ and yappin’, and the third installment cranks both to 11. With a story arc started in 2007’s Mass Effect, Commander Shepard and his entourage of humans, aliens and AI will finally lock horns with the Reapers in the most mortal of combats. Will civilization as we know it be obliterated? More importantly, how many aliens will Shepard have sex with?

This is my Shepard. There are many like him, but this one is mine.

My Mass Effect 1 Shepard, John, was a paragon of virtue; a real do-gooder with a never say die attitude. When the game presented a high road, he always took it. I made these choices for him, because I felt that they were the choices I would make in these situations. So, when the subsequent games allowed me to import my prior saves, carrying forward the outcomes of all the choices I had made, I gladly did so. This is the reason I enjoyed 2 as much as I did, and the reason so many of 3’s missions mattered to me so much. This was my game, my world, and my story. 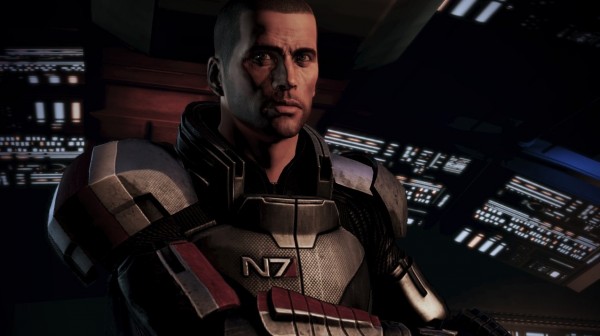 Default Shep is the best Shep.

You could play this series as a completely different character. Maybe you chose to create a female Shepard, who is hard as nails and puts the mission objectives above the safety of her own crew. Or, possibly you started down the same path as me, but when the going got tough, you made the hard choices that I couldn’t. In any case, your journey could be so different than mine that you may see numerous completely different missions and characters. I personally lost 4 main crew members at the end of Mass Effect 2, along with almost every single non-party member NPC on my ship. These losses were most certainly felt during my playthrough of 3, which on many occasion made me stop and wonder what a mission’s outcome would have been if so-and-so were still alive.

The main takeaway here is that you absolutely should play the prior two games in the series before jumping into Mass Effect 3. Without the personal investment in the story and characters, this would be a very different and I would imagine lacking, experience.

The game’s opening sequence sets a tone for the 30+ hour whirlwind tour of the galaxy that serves as a gut-wrenching motivator for your main quest. The labors of Shepard and crew over the previous two titles finally bear bittersweet fruit when the powers that be are forced to take your warnings of impending attack by the galactic destroyers, known as the Reapers, seriously. Unfortunately, it took an actual invasion in their backyard to get them to take notice. Here begins your final journey, an attempt to muster an allied force of all civilizations to make a last stand against a seemingly insurmountable force.

The story’s pace is not unlike a Formula 1 lap around Monaco. You’ll experience some breakneck, epic action setpieces, bookended by brake-slamming conversational exposition. While both the action and the RPG sides of the game have improved greatly since the first Mass Effect, they still feel like two very opposite sides of a coin. The game banks heavily on your equal enjoyment of both elements. With the fate of the galaxy on your shoulders, you would think shopping for, and obsessively caring for, goldfish would be a task for someone with a bit less on their plate. Shepard, however, is not above such things even in these troubled times.

Unless you choose the Action mode at the beginning, wherein all dialog options are chosen automatically, you’ll spend a good portion of the game engaged in BioWare’s signature dialog wheels. The major story-altering decisions are made here, and they are usually very clearly marked. I found myself exploring more of the optional dialog in this game than the previous, as well, due to some fantastic voice performances and familiarity with the world’s denizens. Some characters are written better than others, but if you enjoyed the conversations in the other games, you’ll find the exchanges just as satisfying here. The most pleasant surprise is the frequent, clever humor offered up by the game’s mainstays. EDI, the ship’s matter-of-fact AI, has some well timed zingers, and my personal P.I.C., Garrus, was in rare form.

BioWare once again answers the question “Can love bloom on the battlefield?” with a resounding yes. Never before has the dating sim genre been represented on such a mainstream level. At one point in my Mass Effect 3 playthrough, I was on the road to romance with no less than four ladies and one man. Also, in a twist of realism, once I had done the deed with a certain blue scientist all the other females became instantly aware of the act, ruining my chance at an alien ménage à trois. Of course, the game rewards you with a tasteful, but wholly uncomfortable virtual sex scene. Side-boobs and butt-tops await those who dare to embrace digital love.

Ok, now you can shoot.

Not unlike the advancement between 1 and 2, this third game takes evolutionary steps to improve upon the series’ action elements. You’ll still spend most of your time peeking out of cover, aiming for headshots, but the addition of a charge-up melee attack adds the option to advance position while serving up a large helping of impalement in the process. The tech and biotic powers still combine in devastating ways, although I usually let my NPC’s handle those on their own while I focused on the shooting things in the face. The weapon upgrade system is much improved this time, if a bit tedious. You’ll find new weapons, upgrades and armor pieces on just about every mission, and a new store system allows you to buy many items without leaving your ship. Every weapon has two slots that you can fill with add-ons such as extended magazines, damage enhancing barrels or even zooming scopes. You’ll unavoidably spend several minutes between each mission re-customizing your gear because of the constant stream of loot.

The biggest boon to the action sequences, however, has to be the levels themselves. The varied and gorgeous environments have included more verticality and optional paths to reach your destination. No two levels will play alike, and that helps to keep the combat fresh when you’re facing the same evil human and robomonster enemies over and over again. There are even several worthy boss fights sprinkled throughout, which will either be satisfying or the source of unending frustration depending on your chosen difficulty level. Also of note here are the living backgrounds present in many levels. The visuals and horrifying sounds of desperate fights against the Reapers are always present and add a real sense of dread and doom. 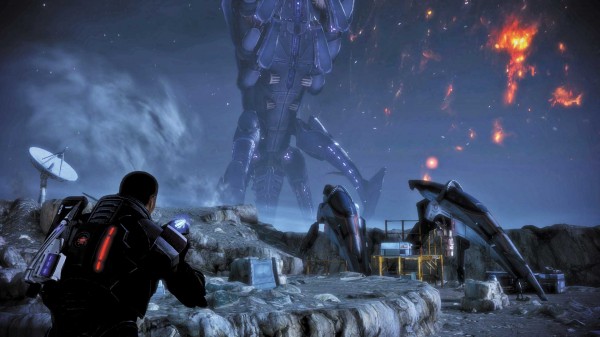 Who let Shepard talk to Gozer?

There is also a co-operative mode included with the game, wherein you complete a series of wave-based, survival style levels with up to 3 other players. This ties into your single player campaign by adding to your Galactic Readiness rating each time to complete a match. The co-op mode features a completely different character and item progression, along with some random loot and microtransactions. This mode is a fun diversion, but I fear for its longevity.

Over the course of this final installment, you’ll wrap up just about every loose end discovered in the whole trilogy. Almost every main mission you complete will reward you with a conclusion to a story arc, to the point that you will constantly be either pumping fists or fighting back tears. This game, more than any other, attempts to draw out the full range of emotions from the player on an alarmingly frequent basis. In my case, it succeeded in spades. I accepted every victory as my own, and each loss as a consequence of my actions. As was always intended with these games, the player is Commander Shepard. So, when Shepard was meant to feel something, I felt it.

After all those satisfying conclusions and heartfelt losses, though, it was so unbelievably disappointing when Mass Effect 3‘s ending took an out-of-left-field, all-for-naught approach. All at once the game throws its overarching themes and logic right out the window in a move that makes the Wachowski brothers look like geniuses. I can’t imagine anyone who has played the entire trilogy, and has been the least bit personally invested in this story, could possibly enjoy the game’s last 10 minutes.

Still, the journey was so wonderful. Once the disappointment of the finale wore off, I couldn’t stop thinking about all the fantastic stories told in this universe and how my Shepard had played a part in them. Normally, this kind of epic space opera, with all of its love, loss and triumph would be reserved for the silver screen or a set of lengthy novels. Therefore, I do suggest you play the entire trilogy from front to back, and craft your own adventure. This is a one-of-a-kind entertainment experience that deserves to be played.

7 Comments → Mass Effect 3 Review: The Ultimate Choose Your Own Adventure