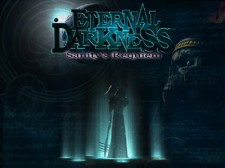 That darkness doesn't look that eternal....

During my college years, the Gamecube was my primary source of electronic entertainment. I was financially strapped at the time, so video games had to take a back seat to food, rent and most importantly beer. It was during this time that my cash strapped roommate was forced into the bargain bin section of Gamestop and purchased a title that would soon become one of my all time favorites.

Eternal Darkness: Sanity’s Requiem was a survival horror game in the vein of Resident Evil but instead of fighting biological experiments you dealt with the otherworldly minions of ancient gods. The gameplay was equal parts combat and puzzle solving, but with the added benefit of being able to use magic spells on top of a slew of standard weaponry.

Where the game really captivated me was the use of multiple characters and time periods to tell a story that was larger than a single event could support. While exploring the home of her late grandfather, the main heroine Alexandra discovers a book called The Tome of Eternal Darkness. As she reads each chapter, she relives the events described in the book through the eyes of the chapter’s featured character. This is used as a narrative tool as well as increasing Alexandra’s magic abilities in order for her to solve the puzzles she encounters in present day. 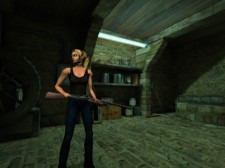 Not even magic can surpass the effectiveness of the classic 12 gauge...

Insane in the Membrane

Another clever feature was something called “Sanity Effects.” In the game you had a red health bar and a green sanity meter. As the green bar decreased, strange things would happen on screen, sometimes affecting in game elements (screen goes upside down, character explodes) and the actual player as well (game informs you that all saved data has been lost). Maintaining your sanity became as crucial as maintaining your health, and could spell doom for your character if one of these visual distortions happened during combat or a crucial puzzle.

So what’s the motivation for Eternal Darkness rearing its sanity devouring head again? First off, it was a critical success, boasting a Metacritic score of 92 out of 100. The demand is obviously there and Silicon Knights would benefit from a sure thing as opposed to trying to figure out what went wrong with Too Human (here’s a clue; it sucked).

The original game was ok on the eyes, but with the power of modern gaming engines, the scares and atmosphere would increase ten-fold. On top of that, the large cast of characters could be extended or developed more thoroughly and DLC could play a pivotal role in supporting the progression of such an interesting story .

What I’d really like to see is Ocarina of Time type game play in the next Eternal Darkness. Imagine the brain testing possibilities as you usher a host of people through different periods of time, switching back and forth to progress the story or solve tricky scenarios. Perhaps a player could choose what characters they put more effort into, resulting in bonuses to your modern day hero or certain environmental alterations.

There are tons of options to explore and the IP is in relatively responsible hands. As much as I hate producers milking titles for sequels, this happens to be on the opposite side of that spectrum. So in conclusion, pull your heads out of your butts Silicon Knights, you’re sitting on gold…well and your faces as well. 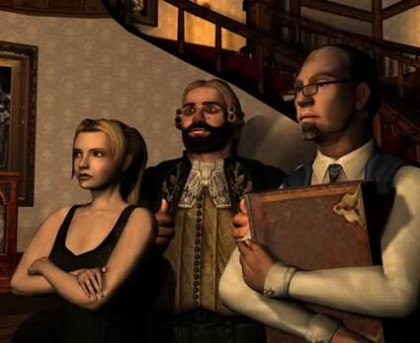