My name is coopopolopolis, and I’m an achievement whore. So I’ll be the first to admit that Microsoft, in my opinion, had a moment of genius with their Achievement/Gamerscore system. Let me back up a bit and explain where I’m coming from. I’ll start by saying I’m a very shallow gamer. I’ve owned almost every game system at some point throughout my life and have never really been a person to play something all the way to the end. I especially never spent the time exploring every nook and cranny looking for audio diaries, or gaining enough experience to max out my characters abilities. I don’t really get into the storyline much. I probably couldn’t tell you any detailed story elements to most of the games I’ve played. And as long as you give me a nice arsenal of weapons with some sweet headshot animation, I’ll probably be completely satisfied.

To elaborate further I used to only play Counter-Strike which is the same 2 min. round over and over and over and over and over. Anyway, now that you’re saying to yourself, “Who is this guy? He’s not a real gamer,” let me get to the point. It became time for me to give up classic systems and Counter-Strike and move on to the next gen systems that came out. So, I purchase a 360. I wasn’t an early adopter. I didn’t get my Xbox until they released the black elite, because let’s be serious, nobody wants a white console. By this time I already had quite a few friends with 360s so my friends list populated pretty quickly. Then, the competitive side in me. that must’ve crept over from Counter-Strike, kicks on. “Oh! What’s this gamerscore thing? I totally need to have a bigger score than my friends.” That’s really all it took for me to instantly get more out of my games. All of a sudden I’ve developed this obsession for getting every achievement that I possibly could (without spending ridiculous amounts of time in online matches) to try and pass most of my friends. Hopefully, I can close the gap between myself and JDevL (even though we all know I have no hope there). I started playing games from start to finish and even playing them on harder difficulties just for the points. I even became that guy who actually went around searching for almost all of the hidden flags in Assassin’s Creed. (By the way, I don’t recommend that. It’s extremely frustrating when you can’t get the points because you’re missing 1.) 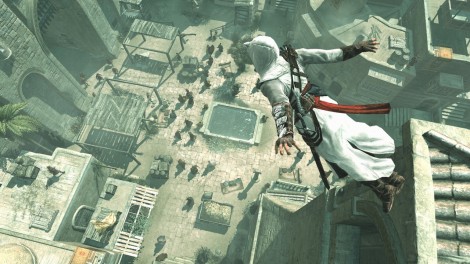 Do I get points for this?

So my question is what is their secret? Why don’t the PS3 trophies have the same effect on me? I’ve owned a PS3 for about a year and a half and I own 1 game. Resistance: Fall of Man, and I’ve only played through maybe 30% of the game. There are quite a few great PS3 title’s that I’d love to play like InFamous, Uncharted 2, and God of War 3, but I haven’t purchased them. Primarily, because there are Xbox games still on my list and I need to get achievements for them. It could be the fact that I had my Xbox first and have more invested in it. Or, the fact that I know 3 people with a PS3 so its not as fun to brag about your trophies to your embarrassing friends list. And what about the Wii… ummm… nice job finally making it black?

I Finished A Game?

I’d say that Microsoft has nailed the online gaming experience and made it easy and simple with Xbox Live. It’s so easy to keep up with your friends and see what they’re playing. It’s flawless to the point that I don’t even blink at paying the $50/year subscription fee for it. So I give Microsoft a win for bringing gamers together in a way that LAN parties never could. I also applaud them for getting shallow gamers like myself to get more out of a game, to explore, to play something more than once. I’m pretty sure that I’ve beat Gears of War 5 times with different co-op partners and 3 times on insane difficulty. I’m searching trash cans in Bioshock 2 for audio diaries, which I still care nothing about. That’s right, I don’t know what the story line is and I’m halfway through. I just know that I’m a Big Daddy with a sweet drill for a hand and I’m increasing my gamerscore. I even completed all the side missions in Borderlands. WTF?!? I don’t do side missions! This isn’t the same coopopolopolis who used to only play Counter-Strike every night (long live #sand! We’ll save that story for another time kiddies).

So I guess the point in all of my rambling is that Microsoft has somehow won my loyalty and gotten me to spend more money on games than I used to all because of a little number next to my gamer pic. Nice work.

This article was submitted to us by coopopolopolis and promoted by a member of The Cursed. If you’d like to submit your own article, please email simon@horriblenight.com.