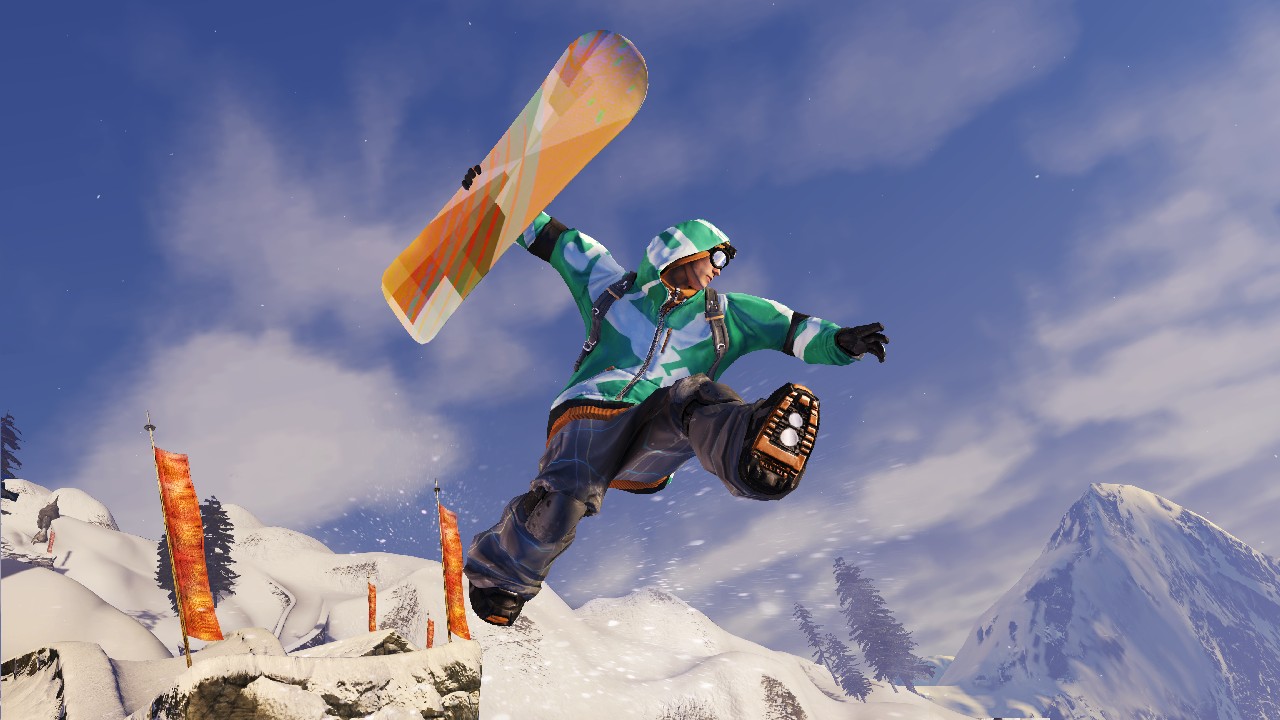 Imagine chilling harsh winds, steep mountainsides of fresh snow and ice, and treacherous drops into foggy pits that probably contain all sorts of unfriendly jagged rocks. This all sounds like something I would hate to contend with during the cold winter season, yet SSX turns all of these undesirable conditions into a spectacle of flashy moves to remixed segments of Run DMC’s “It’s Tricky”. It’s hard not to smile after successfully launching off of a snow-coated ramp, high above the course, and perfectly land an impossible trick as the slope pulses beneath you as if to acknowledge that you are, in fact, awesome. EA Canada’s latest entry into the SSX series is full of these rockstar moments, even when the difference between a melon and an indy might not be something known beforehand. SSX experiments with scenarios that do not always lead to instant gratification, but it’s hard to resist flying back to the peak to surf down again one more time.

Riders on the storm

The escapades of the SSX crew mostly serve as a reason to travel the globe and tackle a variety of mountains. Zoe, an original founder of the SSX team, hopes to be the first to conquer all nine of the “deadly descents”, some of the planet’s tallest and most dangerous mountains, in a World Tour. However, former SSX member Griff sets out on his lonesome with a head start on his old pals. Thus begins an obvious race to be the first to claim the title of being the most extreme badass on Earth. There’s not much in the way of narrative aside from occasional commentary from EA’s favorite disembodied voice, DJ Atomika, and dialogue from helicopter pilots, but it all adds a little extra flavor to the idea of insane snowboarding around the globe. 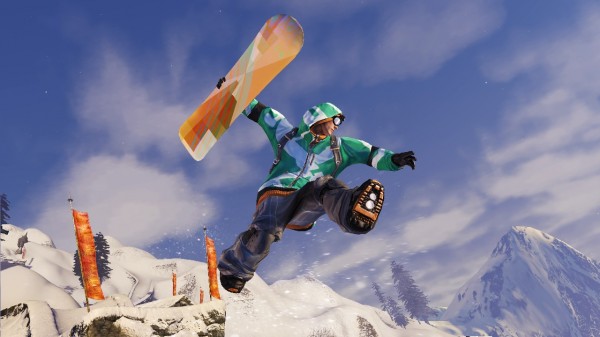 I'm not sure this is a proper boarding stance, but he's a professional.

The real draw to the SSX series is the gameplay and it feels  just as strong here as it did in years past. The events are split across three different categories: racing, tricks and survival. Races are straight-forward descents to the finish line, while trick events are about who can string together the sickest moves for high scores. While racing and performing tricks require two different mindsets, SSX blends the gameplay seamlessly between the two. Successful tricks help to fill up a boost meter that, when full, activates Tricky mode and grants unlimited boost and that can prove essential for getting down the mountain the fastest. On the other hand, speed can be crucial to get huge air to pull off the insane tricks that lead to huge scores. Continuing to land tricks further activates Super Tricky mode which maintains the unlimited boost and allows for a rider’s signature trick, the grand-daddy of all that is trickery, to be performed for maximum points.

Board until you die

Mix sport with spelunking and you get... sporlunking?

Survival runs are the newcomer to the series, where harsh conditions truly factor in and just being able to make it safely to the bottom is crucial. While survival provides something unique to SSX, it requires a slower and more careful approach that the other two modes seem to discourage. In the World Tour, these descents feel like boss battles that can help to groom players into becoming better at handling tricky terrain during trick runs and races. In the open Explore mode where players can choose their own events and earn medals, these survival events become tests of endurance where the goal is to see how many descents can be completed before succumbing to the course’s perils. It leads to a fair share of tedium and sometimes the reward for looping down a slope several times isn’t worth it, but that’s not to say that these events aren’t fun in moderation. Sometimes I do just want to see how long it takes before I accidentally slam into a tree.

Essentially making up the multiplayer component of SSX are Global Events and challenges. There are no game lobbies found here, but instead all of the events are timed to pay out cash prizes at set intervals. Other players, who are actively participating at the same time, will phase in and out of your sessions to make the whole affair feel a little less lonely and little more spontaneous. There are also ghosts that will persist for the entire event, providing insight into how best to complete the run to secure a larger payout. In similar fashion, the aforementioned Explore mode makes use of RiderNet, a retooled version of the Autolog from EA’s Need for Speed games, that directly compares your own times and scores to your friends list and provokes some “friendly” competition about who is the best. These features might not appeal to all who prefer a more traditional multiplayer offering, but I find myself addicted to being number one and can imagine SSX being something I keep returning to down the line as records are constantly broken.

A sad reminder that your friends are not real, but you can still be better than them.

Turning SSX into more of a loot game, the idea of equipping gear has been introduced into the SSX universe. Riders can have their outfits customized for appearance or stat bonuses, choose from a number of boards with randomized speed, trick and boost stats and even equip mods that provide one-time increases to those same stats. There’s also gear specific to the idea of surviving, such as armor to lessen crash damage and wingsuits to soar over chasms too large to jump across. I’m a sucker for collecting, so this concept works for me and makes each event feel tactical and not solely left up to chance. Another introduced mechanic is to rewind time back as far as desired, either at the cost of points or having one less chance to use the ability, and this plays the biggest role in surviving. During races, it’s nearly next to useless outside of the World Tour where all that matters is placing in the top three. Against the scores and times of other human players, I found myself restarting the entire event to avoid making the mistake altogether. It’s not a poor inclusion, but it’s certainly at the bottom of the bag of tricks.

Of course, the joy of SSX would be greatly diminished if the controls weren’t up to the job. Thankfully, the handling of the riders feels great and sells the appearance that they’re actually there on the slopes. There are a few different control options, but I mostly found myself using the default setup and the right stick to perform tricks. Pushing the stick in a direction performs a basic maneuver, while motions like quarter rotations and snapping back-and-forth add a layer of complexity that keep the tricks from getting stale. These tricks can also be tweaked into flashier versions of themselves that are worth more points, so there was hardly ever a time where I wasn’t holding the appropriate trigger down and going for broke. Single button presses allow for ground tricks, grinding, boosting and rewinds. After two quick tutorials, everything quickly becomes second nature.

Tricking in the winter wonderland

The mountainsides look absolutely amazing, even when racing down them at high speeds. For a game about carving through snow, it still provides a variety of scenery and unique vistas. Large objects like crashed train cars and buried buildings litter the slopes, while bright red rails draw attention to places that can be reached by grinding. Dark volcanic caverns in Africa stand out as something unexpected on the list of sights.  Entering Super Tricky mode creates a glowing orange trail behind the colorful cast of racers that just looks too cool. All of this is paired with a hip and modern soundtrack that does its best to keep you in the moment (songs get cool effects added to them during a number of tricks) and I’ve now found myself listening to some of these songs in my everyday life. Even if the music doesn’t resonate, there’s an option to create custom playlists from music saved on the console and still not miss out on the audio effects. If you just have to hear Lady Gaga while you play, then chill out, it’s totally possible. 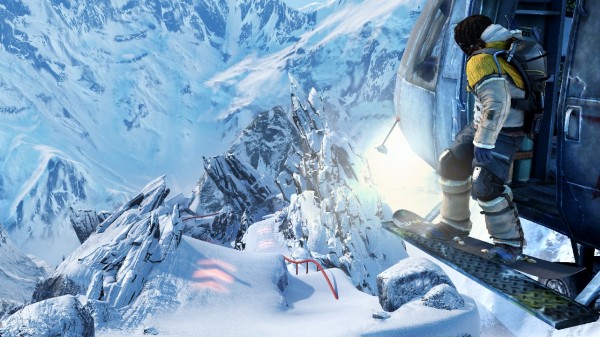 Yeah, that tiny rail is probably the safest way down.

SSX is packed full of intense snowboarding with a fun arcade feel. It rewards skill, but isn’t too demanding that it becomes a chore just to finish. Not every course is perfect and some border on downright frustrating with thin trails and bottomless pits, but they’re certainly not impossible. Veterans of the over-the-top series will feel right at home on the slopes, even if the mountains are now truer to life. I can’t help having a good time trying to top the leaderboards, unlock better gear and just see what I’m capable of if I attempt that last run one more time. The increased focus on survival might not win over the non-believers, but SSX is definitely worth at least a try for those unfamiliar with the series and, who knows, you just might find yourself addicted to the board by the time you reach the bottom of the mountain.