The Battlefield 3: Close Quarters DLC expansion was announced for June 2012 at an EA event last night. There haven’t been any major DLC release since Back to Karkand was released in December 2011. Close Quarters will include four new maps and 10 weapons. There will be no new vehicles introduced as it’s speculated the maps will be relatively smaller in size…hence the “close quarters.” 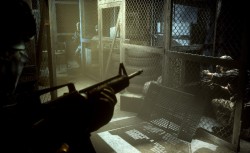 Fighting in cages can be considered close quarters...

The timing of this announcement is curious as there is a growing segment of the BF3 community, particularly in the PC demographic, that are growing frustrated and threatening action if updates aren’t made to the game. DICE has already announce a huge list of updates on the Battlelog, but many were hoping for new content as well as fixes. DICE and EA have been notoriously quiet about when updates were going to be made until the last minute for their patch updates and other releases.

It’s refreshing to see something that is coming up to keep an eye on.Two more expansion packs or DLC were announced to follow Close Quarters. One titled Armored Kill will feature larger maps and new vehicles, and the other is known as End Game. Electronic Arts didn’t give too much detail on that one other than a cryptic image of a guy holding a knife. I’m wondering if it could be a single player or co-op expansion. The multiplayer experience of Battlefield 3 is the most in-depth part of the game experience and deserves attention, but a new single player or co-op experience could shake the cobwebs from a lackluster single player campaign.