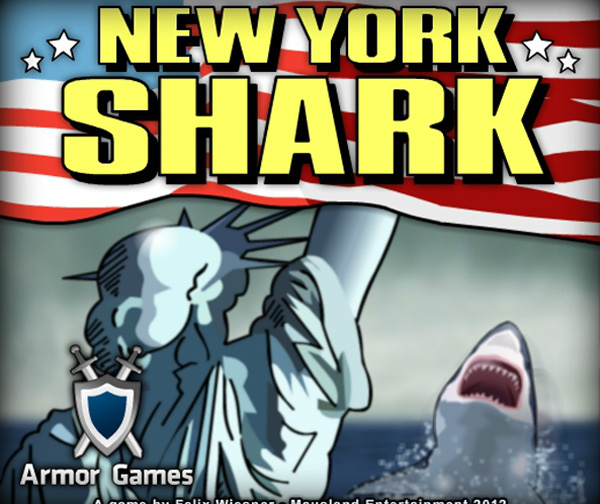 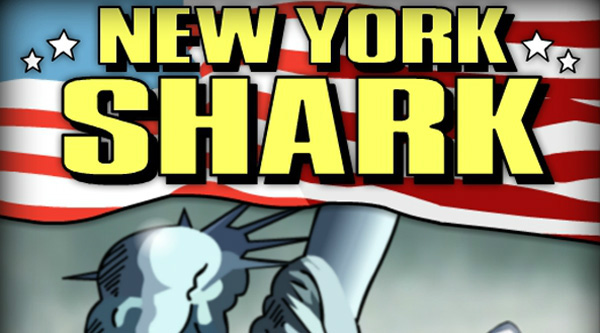 Sharks don’t respect humanity or any of the amazing things that humans have created over the years since they decided to stop being monkeys and start acting civilized. Sharks have been around much longer, but have yet to develop anything resembling emotions nor have they pursued creative outlets of any kind. They are here on this earth to do one thing and that’s eat everything in their path without any kind of hesitation and, from the research I did, humans appears to be their favorite food (and not because we looks like seals when we surf). Sharks are gigantic jerks and, because we love to emulate all things that act like dicks, taking on the role of a shark who screws with people (aka: eats them) makes for a pretty exciting game. Apparently Felix Wiesner of Mausland Entertainment knows how to make people who hate sharks love watching other people get eaten by sharks. Kudos to you, sir!

The cold-blooded protagonist of New York Shark comes from a long line of city-terrorizing fish that have attacked such locations as Sydney and Miami. It was only a matter of time before New York was targeted despite not necessarily being the proper climate for whatever species of shark NY Shark happens to be (looks like a Great White to me). NY Shark doesn’t care as his/her blood is kept warm by all the explosion fueled adrenaline that’s coursing through its veins as it chomps through both aquatic lifeforms and anything that happens to be within 30 feet of the ocean. Think you’re safe in a hot air balloon, corny guy trying to impress his girlfriend? Think again, or don’t, because NY Shark just introduced your romantic adventure to the cold waters below. Looks like you’ll have to propose elsewhere…like in Hell! 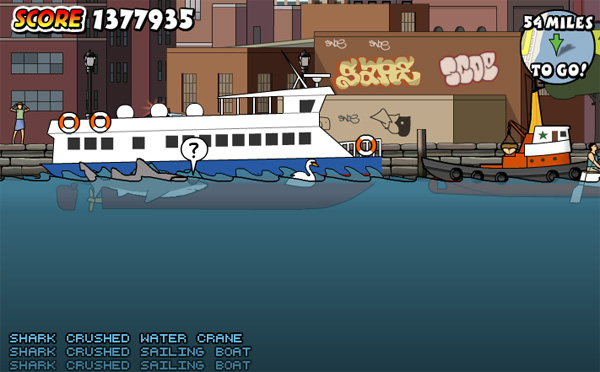 There's quite a bit of dining options when you're a shark with an NBA player's jumping ability.

However, as I played the game I found myself with a change of heart and fell into the role of a Devil’s advocate of sorts. I don’t normally respect the senseless killing of innocent people, but then I think about all the homeopathic remedies that people craft from things like tiger penises and shark fins. Perhaps NY Shark isn’t the tale of a chainsaw-like animal devastating lives as much as it’s the tale of a creature trying to harvest human parts in order to make cures for erectile dysfunction in the geriatric shark population. If that’s the case, then perhaps we need to tip our hat to this shaman of the seas and maybe the world’s leaders will finally recognize Sharkland as a legitimate member of the UN. Until that point, don’t swim in the ocean or travel in low flying planes, there’s a ton of crabby old sharks that are struggling with boners.