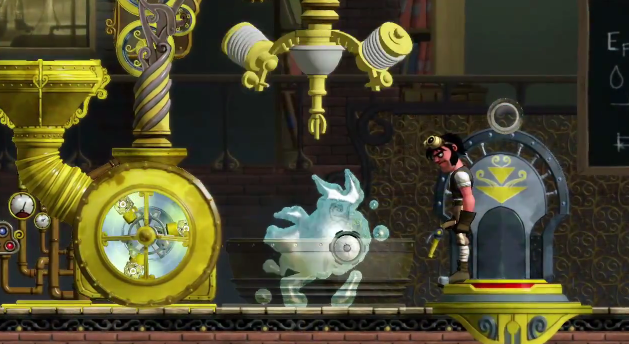 I feel bad starting out the reflex review for Vessel with this but: the music (by John Hopkins) and sound (directed by Leonard Paul) is awesome. That’s not to take away from the rest of the game at all, since I’ve really enjoyed the time I’ve gotten to spend with it so far, but the combination of the two sets up so much of the rest of the game that not starting out praising it would be remiss on my part. In the time I’ve spent with the game, the music has never gotten repetitive and it reacts to your progress through each puzzle; when it’s mated with main character M. Arkwright’s echoing steps through the levels, the “plunks” and “hisses” of water moving or erupting into steam and the “thunks” of machinery and doors, Vessel‘s sound design stands out in a way that is striking.

With that praise out of the way, it’s about time to explain the game.

Back in August, 2011, we got our hands on the preview build of Vessel and, after getting a taste of it, I chatted with one of the guys from Strange Loop Games and I told him that I had had fun with it and how enjoyable playing with all of the physics and liquids was. That hasn’t changed – ultimately, Vessel is a combination of Lemmings and Pipe Mania: it’s a fluid physics puzzle game with a very cool vibe, a little bit of a sentience question, and adorable minions all packaged up in a 2D side-scroller. 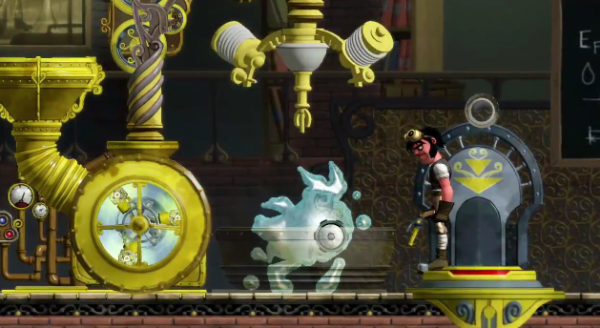 Always, ALWAYS remember your oversized goggles when you go platforming.

You solve the puzzles as M. Arkwright, inventor of the Fluro, a liquid-based automaton involved in every aspect of daily life whether in industry or commerce. In other words, they’re robots made of water or lava or iced tea or…well, anything, powered by “turbines” that form a seed around which the Fluro forms. One of M. Arkwright’s Fluros gets loose and runs off (for a reason I’m unclear on at this point in my gameplay) and the chase is on, moving from room to room using switches, a backpack-mounted squirt gun (to create new Fluros and solidify lava) and turbines in order to open doors, extend bridges and all of the other puzzle-game standards.

I know it's a pendulum attached to a gear, but WHY?!

I’m never quite sure whether Justin L. is actually an evil genius, which by itself lends itself to thinking that, yes, he is an evil genius and that uncertainty is part of his plan. I only mention this because, two days before Mass Effect 3 comes out, he says, “I want you to review Vessel.” The evil genius part comes in because I’m probably a perfect tester for the game – I have medium amounts of patience, I’m fairly good (but not engineer good) with physics puzzles and I’m either good at analyzing default difficulty levels…or just not that great at most games.

At any rate, Vessel has a great level of difficulty for a puzzle game with some platforming elements. It’s like the jalapeño pepper – spicy, but not so much that it nukes your tastebuds into oblivion like a habeñero. I played for a couple of hours and, while I did run into a couple of puzzles where I had to stop, sit, and think, I was never punished by the game by getting stuck (the puzzles all reset themselves eventually) and I definitely never did one of those throw-your-hands-up-&-rub-your-face frustration tantrums, which, in all honestly, doesn’t take a whole lot.

Graphically, Vessel‘s sort of soothing to look at and I have to think that some of that comes from the focus on the movement of liquids. The backgrounds are sharp and, when you’re outside, inventive both in the appearance of the platforming elements and the cities, with skyscrapers serviced by airship. Inside the labs, caverns, foundries and who knows where else, I kept looking at the goldbergian puzzles, trying to figure out what all of the machinery did when it wasn’t blocking my way. At the same time that the visuals are intricate-bordering-on-baroque, there’s also a little bit of creepiness. I can’t quite put my finger on it – the sound design has a lot to do with it, but I think it’s mainly because M. Arkwright is clearly running through human places, but there are no people to be found, only M. Arkwright’s golem-like creations and lots and lots of nonsensical machinery.

At this point in my experience with Vessel, this is my only gripe of any significance and, happily, it’s easy to fix. I was playing on my keyboard (the controls are either intuitive or spelled out in-game) and the experience was a little lacking. M. Arkwright moves pretty quickly and it was hard to get any feeling of precision using the WASD/spacebar setup; considering there is a platforming element involved as well as a need for aiming, this was a source of a little frustration.

Fortunately, this comes with an easy fix (and isn’t really Strange Loop’s “fault” per se)  – use a game pad. This is how I experienced Vessel back in August and it’s how I’d recommend you approach it if you’re going to pick it up on Steam. Also, this is a small thing, but helps make Vessel approachable: you can save whenever. This is probably a holdover reaction from the bad-old-days when you couldn’t, but being able to save whenever makes me happy. 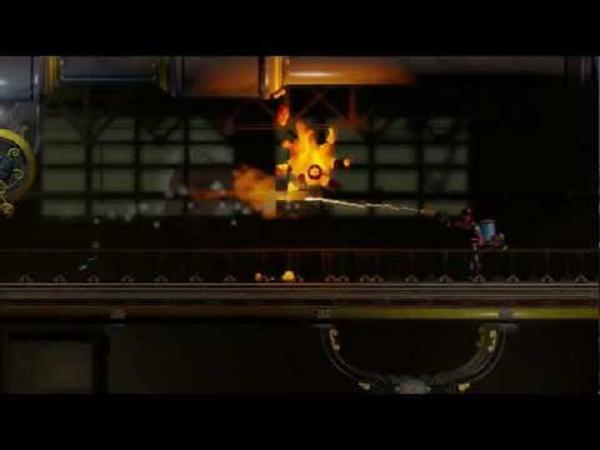 Technically, fire is a cold plasma, not a liquid. Close enough, I suppose.

As I mentioned, technically, Vessel is a 2D sidescrolling puzzle game with some platforming elements. The ESRB rated it “E” for everyone and I’d generally agree – while lava can “kill” you, there’s nothing graphic about it and the Fluros are endearingly cute in a cnidarian kind of way. It may be a little complicated for the little ones, but seeing as I don’t have any, what do I know? It could be that it’s a great teaching tool for explaining gravity and simple machines in a fun way but again, what do I know?

Vessel was released on March 1 for PC (and, I assume, Mac). It’s supposed to come out for PSN and XBLA at some point as well, but so far, no official launch date. If you crank right through it (according to Strange Loop), it should take you about 10 hours. I don’t feel right rating a game numerically without having finished it, but at this point, let’s just say it has my stamp of approval, a big thumbs up and my recommendation.