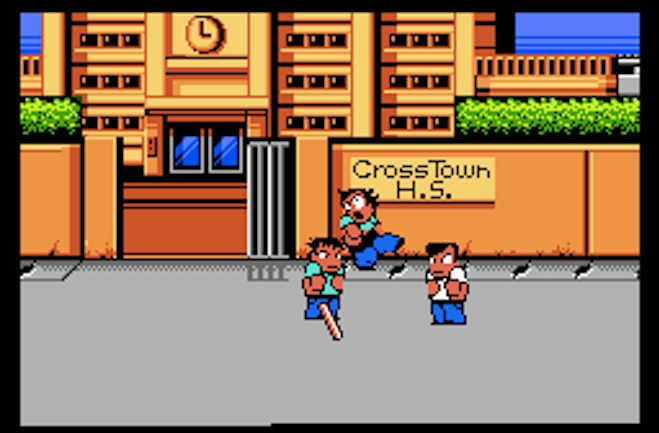 There are a plethora of websites online that specialize in reviewing and rating vacation destinations. When it comes to taking a digital or video game vacation there are no useful resources to assist in planning, which is why I have compiled a small list of classic digital vacation hot spots that you may (or may not) want to avoid. 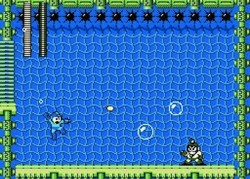 The amenities are fantastic.

If you’re looking for a nice resort, you could always contact the infamous travel agent Dr. Wily. Make sure you ask him to set you up with the Bubble Man package. With this package you’ll find yourself surrounded by the sumptuous accommodations of an underwater labyrinth. You have to be careful because it is quite a journey to reach your room. First of all, to reach the entrance you have to traverse a series of poorly placed platforms near a waterfall. Of course, this is all perfectly safe, because jumping from one wet metal girder to another could in no way be dangerous. Also, the girders are protected by robotic crabs. I don’t know what in the world these crabs are protecting, but I can tell you that they aren’t protecting the girders from rust, as your first impression of this resort will likely be that this place has tetanus written all over it. Once you make it to the main entrance of the resort, you will be asked to swim the rest of the way there. Thankfully the water is somewhat clean. Again, you will be greeted by robotic crabs, but they won’t be your main concern. As you swim down the main tunnel you will find that the path to your room is littered with what look like spiked mines, and you do notwant to touch these. In some corridors these spikes line the entire ceiling. To keep the whole robotic-crustacean-theme consistent, you will also discover robotic shrimp and several giant robotic barracuda. After taking another trip outside to navigate more rusted platforms, you will reach your room. Don’t be surprised if the concierge is in your room waiting to lend you a hand and by “lend you a hand,” I mean “attack you with bubbles.” The dress code at this resort is ridiculous, considering the concierge is dressed like a diver. After you subdue the concierge you should be free to enjoy your vacation. If you enjoy your stay in the aquatic resort, just remember when planning your next vacation that Dr. Wily has numerous themed locales.

I have always wanted to visit Japan. I love everything about the culture. Even the rural towns in Japan seem very quaint and interesting. It seems that everyone knows each other and there is a good sense of comradery amongst the townspeople. This is NOT the case in River City. My first complaint about River City is the staggering amount of gangs. I wouldn’t be surprised if it had the most gangs, per capita, of any town. There is literally a gang on every street corner not to mention the highways. You shouldn’t have to worry about the gangs coming after you unless your name is Alex or Ryan. They really hate guys named Alex and Ryan, especially if they’re brothers. The other odd thing about these gangs is that they are very loose with their money. Several times I saw blood-stained coins lying all over the ground. A strange perk for sure, but are you going to turn down free cash? I wouldn’t advise going anywhere near River City High School. Some jerk named Slick has that place on total lock-down. He has turned the school into his personal compound. I bet the local youths are upset that they don’t have anywhere to shoot hoops or get an education. 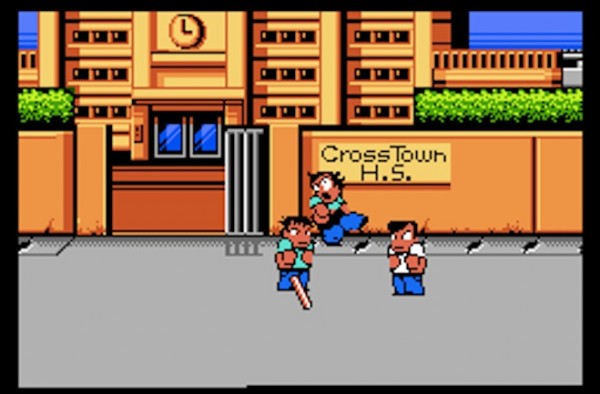 I warned you about the school.

There is some good to River City as the citizens that are not gang members are really nice, and you’ll be entranced by the loads of local culture. Each commercial district has great restaurants and great shops, and I can’t recommend the bookstores highly enough. Local legend says that purchasing certain books will give you uncanny fighting abilities. The food in town is just fantastic. You can find a wide variety of cuisine from burgers to sushi. I am still trying to figure out how food in River City is prepared so quickly; it’s like this city has the magical ability to cook food faster than anywhere else on the planet. You literally order your food and within seconds it is delivered to you. Then again, for all I know every restaurant is pulling a fast one on us and serving Lean Cuisines. There is one great piece of advice I can give you about River City is that you have to try the smiles. The best part is they’re free!

A lot of people plan vacations around adventure sports, but Ragnarok’s World should not make your list of adventure sport destinations. First of all this place has a rat problem…a HUGE rat problem. These rats are very aggressive and territorial and overall just not a very hospitable bunch. If you’re lucky, there may be some roid-raging Battletoadsbashing rat skulls in the ground. Just avoid the toad’s oversized knuckles, they may be infected. 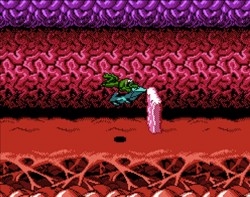 I don't think Jeff Gordon could survive this course.

While the planet does offer a variety of adventure sports, the order in which you participate in them is not negotiable. The first sport is rappelling. The locals have a wonderful hole in the ground that is set up perfectly for the activity. The only thing is that this hole is littered with rabid birds. Just like the rats, the birds are overly territorial. This makes me question the Ragnarok Chamber of Commerce’s selection of this particular hole for their rappelling course. Is a waterfall out of the question here? I also do not advise rappelling down this hole with a friend because one of you is going to get hurt. Once you pass the rappelling course, a local merchant kindly sets up a jet bike course for you to drive. Sounds great, right? Well, this merchant doesn’t get a lot of customers because of the Ragnarok Board of Tourism’s lack of advertising. Over the years, the race course has become dilapidated. There are massive pot holes and concrete construction barriers you have to jump over as you navigate the course. The owner of this establishment has also been unable to maintain his bikes and it has become very common for the throttle on the bikes to get stuck. This means that over time, the bike goes faster and faster, making jumping pot holes and concrete blocks nearly impossible. To be honest, you may want to undergo some extreme sports training before visiting Ragnarok’s World.

If you’re looking to take a European vacation you could always take a trip to Transylvania. The local travel agency has what they call the Castlevania tour. The package sends you to a wonderful castle just outside of town that loves visitors. This castle has not changed much over the past several hundred years, leaving most of the castle in disrepair. The lighting is still mostly done with candles and torches,completing the ‘historic’ feel, with a decor to match. The entry hall is littered with tattered tapestries that have not aged well. Even the clock tower could use a little oil in the gears. 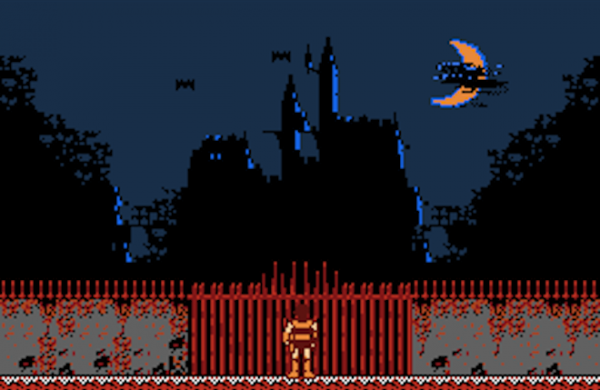 It's not as inviting as it looks.

The castle does employ a huge stafff, however, and can hold a lot of guests as well. To be honest, the employees aren’t the friendliest I have ever seen. The minute you walk through the door you will be greeted by zombies running right at you. At first I thought they were eager busboys, going to take my bags for me, but they seemed more focused on brains. After settling in, I checked out the pool. The lifeguards at this pool are strange fishman creatures who, despite their obvious aquatic nature, are the worst lifeguards I have ever seen. They tried pushing me into the pool and were very aggressive about it; a few even shot at me. The castle also employees wolves, knights, bats, and Medusa heads, to name a few, yet, the housekeeping staff seems to be missing entirely. The cleanliness of this castle would have been zero stars out of five. It’s clear that no one has picked up a duster over the past hundred years. I also want to know who is in charge of maintenance, since the castle is falling apart at the seams. There are bridges leading to other sections of the castle that don’t even exist anymore. I shouldn’t have to make death defying jumps along my way to the spa. To add insult to injury, candles aren’t even replaced, making navigating in the dark even more hazardous. Oddly enough, though, breaking a candle will make anything from a watch to hearts appear. The hearts are pretty much useless. I also discovered pork chops in several walls of the castle, making me question when the last health department inspection was. I wanted to talk to the CEO about my issues, but when I discovered that his assistant was the Grim Reaper, I made the quick decision to find alternate accommodations. I ended up staying in one of the many small rural towns outside of the castle, which I can’t recommend either. The townspeople are absolutely neurotic. Having a conversation with one of these people is completely pointless. One old lady invited me to stay with her, but she really creeped me out. Everything the people say is cryptic and tends to be meaningless psycho-babble. The shopping in these towns is also terrible. Who wants to buy a blue crystal, whip, and garlic? What in the hell am I going to do with that? In the end I would say that if you decide to visit Transylvania, don’t stay too long. The nights are even worse.

Even if these reviews never appear on Travelocity, the public has the right to know about the dangers of a certain digital vacations. Actually, now that I think about it most places you could digitally visit are ridiculously dangerous and should probably be avoided. Make sure that you do your research and select a location that will not put you in a position to face certain death. I would consider  horseback riding with Barbie if you want a safe vacation.