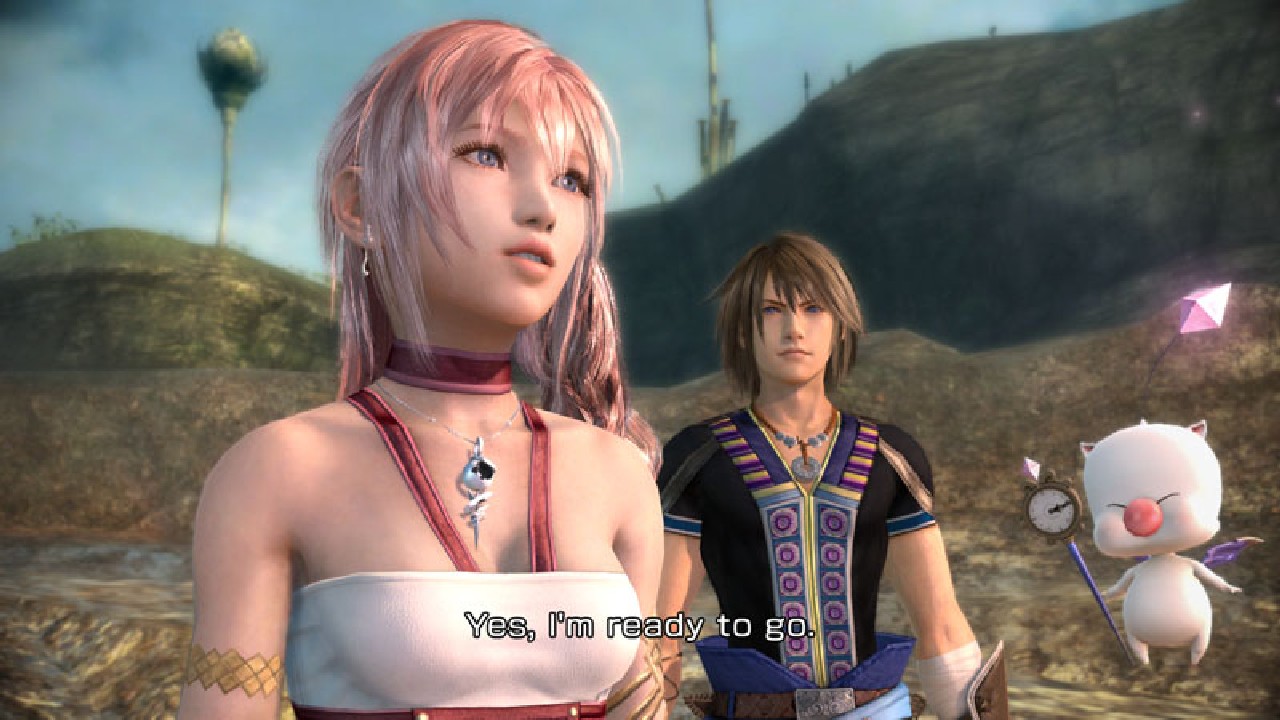 In what seems to be an effort to right the wrongs of its predecessor, Final Fantasy XIII-2 continues the story of Lightning and friends mainly by the usage of time travel. It’s almost as if Square Enix is subconsciously trying to say they want to go back in time and make everybody happy the first time around. That’s not to say that Final Fantasy XIII was a horrible game by an means, though it certainly proved that it could be a boring exercise of walking down hallways. The combat was way more interesting with a command queue setup that kept the action fast and the ability to swap between preset roles. That fun system carries over into Part 2 (Electric Boogaloo) to join a greater sense of exploration and a host of other enjoyable features. Unfortunately, to a lesser extent, a handful of underwhelming decisions pollute the experience and really make me question how many more fantasies we really need.

Forward to the past

In a story change that seems just as eager to confuse as to delight, Final Fantasy XIII-2 (Back in the Habit) decides to place the leading lady crown on Lightning’s younger sister Serah. After having a strange dream about Lightning locked in battle against a powerful man with questionable fashion sense, Serah awakens to find herself and others under attacks by foreign monsters. She’s saved by a troubled young man named Noel, who is able to travel through time and was recruited by Lightning to find Serah and reunite the sisters. This pretty much sets off the idea that Serah and Noel can start time-traveling to correct events that benefit each other’s motives. 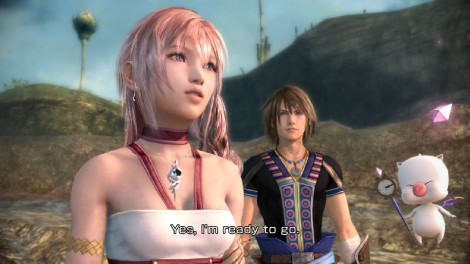 These artefacts sure are a paradox of an enigma, Mog!

While not a plot that’s hard to understand at a basic level, things are made stranger by the sudden usage of vocabulary that makes the story seem right on the verge of internet fan-fiction. When something at a given location during a certain time is “not quite correct”, it’s a paradox. For example, a pillar supporting a structure will eventually fall apart hundreds of years in the future. However, if a monster that shouldn’t exist in a time and place destroys it sooner than normal, Final Fantasy XIII-2 (Judgment Day) describes this event as being a paradox. Not to go on and on about definitions, but it’s actually more of an anomaly or inconsistency. Now if Serah traveled back in time and pushed herself off a tall cliff, then Square Enix would be onto something.

Speaking of tall cliffs, Final Fantasy XIII-2 (When Nature Calls) is a very mixed bag when it comes to its cast of characters. While a number of old faces make an appearance, most of the more interesting ones get relatively small amounts of screen time. I’m 12 hours in and, aside from Lightning in the opening minutes, the only familiar faces I’ve interacted with are Hope and Snow. Hope might be miles less annoying this time around, but he still leaves much to be desired in terms of me “giving a damn.” Certain others have only been mentioned briefly in conversation, but, so far, it’s very clear that this is Serah and Noel’s story. Noel, being much more interesting than Serah, has provided for some engaging backstory. I’m finding myself interested in the next cutscene if not to learn more about what happened along the timeline that led to his dystopian future.

The story behind XIII-2’s antagonist Caius has also intrigued me enough to push forward, his wardrobe be damned. While I do think of him as the bad guy, his motives aren’t so simplistic as world domination or other zany affairs. I almost feel bad (or at least curious) about whatever demons he’s struggling with as I continue to get in his way. However, not every new character is likeable as Noel or Caius. Hope’s new assistant Alyssa seemed to ride the line between childishly annoying and laughingly over-dramatic. Worse of all is the time-traveling shopkeeper Chocolina. Her loud grating voice, when I bring myself to do business with her, is so far past annoying that any argument against the use of voice-acting should automatically include her and she’s not even important to the story as far as I know.

Making a glorious return is the Final Fantasy XIII battle system, which continues to place a strong focus on using the right occupations to dispatch foes. Battles continue to move at a brisk pace and the controls do their best to make selections quick and easy. Auto-battle is still considered the player’s best friend, choosing the right attacks and spells based on the situation. If a character’s health is getting low, a medic will automatically cast a few Cure spells in his or her direction. If a monster is weak to flames, fire-based attacks will take priority. The difficult side of combat is swapping between preset setups, or paradigms, to make it through the fights alive and as efficiently as possible to earn better rewards. Even though most  fights barely venture into extremely difficult territory, this part of Final Fantasy XIII-2 (Die Harder) feels fun and I look forward to battling and growing my team.

Speaking of the team, a new aspect of XIII-2 is monster collecting which brings the total party count to three. After a battle, a number of tameable enemies have a decent chance to become recruited and grow in strength just like Serah and Noel. These monsters represent one of the six major class types, such as medic Cait Siths and commando Chocobos, but the true depth comes in how they level. All leveling is due via the Crystarium, a web-like structure that resets and bestows special bonuses every time all of the nodes are lit. Monsters, though, have unique restrictions placed on them such as only being able to grow to a specific level and being able to use a set number of abilities. There is a fusion system that allows one monster to absorb the strengths and abilities of another, losing the fused creature in the process. This side of party building can get crazy levels of complicated, but it adds customization to the combat that really allows for players to become invested in their teams. The first time I caught my own chocobo, I squealed like a child on Christmas Day and I’m mostly not ashamed of that. 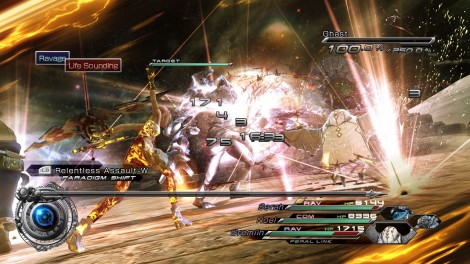 If you love random flying numbers, you're gonna love this combat.

In efforts to break the monotony of the first XIII, world traversal is less restricted and a number of branching paths exist to hide away hidden items and other secrets. Mog, a special moogle given to Serah by Lightning, is also able to detect hidden items and artifacts as well as retrieve them. These small changes make traveling more interesting than just running from start to finish with the occasional bits of dialogue. There are also characters that issue side quests to defeat special enemies or find items and the rewards for these tend to be a fragment collectible, of which there are 160. Whether or not collecting all of these is worth it, I don’t know, but it’s something extra for completionists to do and I usually can’t resist those types of errands. There’s also a casino hidden away with the usual types of gambling minigames and even a Chocobo racing track. While there are no promises that a player will become invested in every one of these activities, it’s nice to see XIII-2 go back to basics on fleshing out the gameplay.

For every two steps…

Artistically, the Final Fantasy series has introduced several memorable characters and the soundtracks have been nothing short of iconic. XIII-2’s visuals are in line with its predecessor, hosting a variety of bright, eye-catching characters and scenery. However, I find myself mostly tolerating the outfits of the main characters more than feeling like a fan. It’s all a matter of style and preference, but there’s ultimately nothing wrong with the overall look. Unfortunately, most of the faltering comes from the audio side of the presentation. The voice acting and soundtrack is just a bizarre mixed bag. For every Noel scene that resonates with me, there’s an Alyssa. For every track that fits the scene, there’s a screaming metal song during a boss fight. I don’t know who XIII-2 was trying to please with these decisions, but it sure wasn’t me. 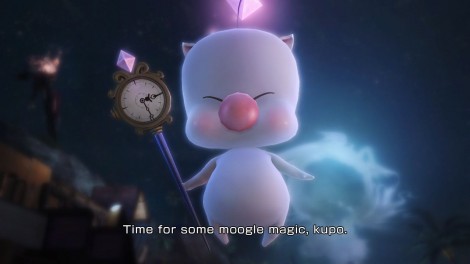 There's not enough moggle magic to save this soundtrack.

Final Fantasy XIII-2 (2 Final 2 Fantasy)  plays out like an apology letter in some ways to those who wanted to enjoy the first but simply couldn’t, like me. The problem is that for every aspect of the game that wins me over, there’s another one that wants to scare me away. The gameplay is now far ahead of what was offered in XIII, but the story is littered with awkward sci-fi terminology and a scattering of annoying character behavior. The visuals range from fine to good, but the soundtrack delves down into bad territory way too often. I’ll keep playing this one, but it’s hard to recommend to those who haven’t spent time playing XIII because none of this will immediately make sense. If that isn’t enough to stop you, then this fun, yet flawed and weirdly titled, experience might be worth your “time.” Sorry, I couldn’t resist.