I’ve been watching the tale of Gotham City Impostors since about the time when the other Batman game came out and punched me right in the gullet. I’ve been decidedly on the fence about it as I’m unsure if the whacky premise will translate to a fun game that I, and my friends, will play. Since the game launches today I thought it would be fitting to talk about the crazy that is the DLC for GCI. 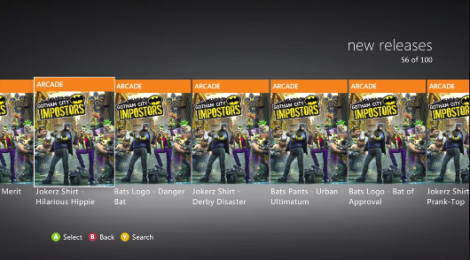 It's the new DLC super store!

As of yesterday, the Xbox Live Marketplace was hammered with more than 100 DLC items that range in prices from 80 to 320 MS points. So when you go to Gotham City Impostors’ little space on XBL your screen will be flooded with options. So many, in fact, it feels like too many. It’s been indicated that this DLC will actually have no effect on gameplay, and it’s all purely for cosmetic purposes. Oddly enough, it seems that all of them will be unlockable in the game. So buying the DLC really only supports the impatient.

Even though there’s a ton of DLC for this game and it seems to be unlockable through hard work, behind-the-knee sweat, and good ol’ fashioned gumption, I must say I don’t have a problem with this DLC. Either way Monolith and WB Games wins out. Gamers who don’t want to work for these items or have money to spare can be the first to get their hands on these items, and gamers who work hard for them will be forced to play the game which is really want Monolith should want. It sure beats the alternative for gamers – having to buy DLC just to get a key part of a game. I will take this model over that any day. So in a way, I like this kind of crazy.