I’m going to start by saying that I have a strange fascination for video game developers that work in tiny teams. I want to disclose this because I maintain a strict ethical code that requires me to reveal any potential bias that may alter my review of certain gaming themed materials. Being that the spectacular Pineapple Smash Crew was developed by one guy (Rich Edwards of Rich Make Game fame) and scored by another (chiptune master Syphus), you may think I’m about to reach Fox News levels of bias, but trust me when I say pineapples are the new tangerine. Confused? That’s ok, you’ll be too busy having fun to worry about it.

Pineapple Smash Crew is a simple tale revolving around the exploits of four man teams of MERCs tasked with exploring derelict space ships and completing missions with the overall goal of making tons of cash. Sounds easy enough (besides the whole vacuum of space thing) however, each ship seems to have its fair share of obstacles that make the lives of these entrepreneurial strong arms a bit difficult, obstacles in the form of deteriorating hulls, explosive barrels and a who’s who of space monsters that include robots, zombies and slugs, all of which want nothing more than to bite your face off or hit you with uncomfortably warm projectiles. 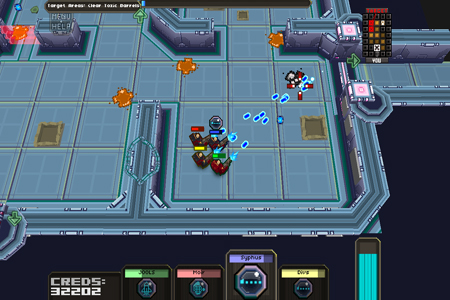 The latter seem to be the biggest issue you’ll have to deal with throughout your time with PSC, thus focusing the scope of gameplay on a style of frantic action that seems to be making a comeback as of late. You control all four MERCs at the same time from a top down perspective, which seems like it’d be confusing but works out really nicely and makes the player feel like they’re a force to be reckoned with. The lack of micromanagement (which I’ll admit at first was a bit disappointing) helps to keep everything tight and orderly. You’ll have to adjust to the whole moving/shooting thing a bit since you lead with one character at a time with the others following close behind, meaning that dodging an enemy doesn’t guarantee that your entire team will avoid harm. Despite this, the controls are some of the most responsive controls I have ever encountered in an indie (0r really any) game. Once everything begins to flow, you’ll likely resemble a train, a crazy train that is, of endless bullets and PSC’s incredibly surprising (in a good way) take on grenades.

The “Pineapples” of Pineapple Smash Crew

Grenades in most games tend to be either a last case scenario or equalizer when dealing with more difficult foes. In PSC, grenades are to be used as often as one can find them and experimenting with their different functions is part of the fun of the game. Each MERC can hold a single grenade type, which can be selected by rotating between the different members of your team (controlled by the middle mouse wheel). The grenades vary from your standard throw/explode types to healing auras and turrets. Each can be detonated with the click of the right mouse button but handle differently and some even require a bit of steering to get them exactly where you want them (which helps when killing exploding creatures that may lie in wait around a corner). You start off with a couple of grenade flavors, but collecting blue containers (full of something that I can only assume is totally awesome, but not child friendly) allows you to level up and choose different types (13 total). These grenades randomly appear after destroying breakable objects or killing enemies, but the randomness is part of the fun and forces one to be creative.

Encounters of the Random Kind 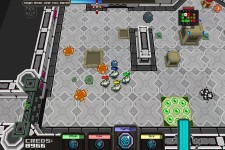 This is not the first time I've seen this decor.

Speaking of randomness, every level (or ship) in the game is randomly generated in terms of layout, the objectives that need to be met and the enemies you’ll encounter. This randomness is not real distinct as everything still feels pretty similar, but it definitely helps with replayability. Some ships have a computer that you can download information from, which slowly adds to the pieces needed to reveal a mother ship, which is chock full of goodies and can “set up a MERC for life”. That’s a really long time. Because PSC was made with old school gaming at heart, this is a forgivable issue, if it could even be described as one to begin with.

Another random aspect of the game are the 4 different power-ups that are strewn about each ship. Each one gives your team either higher damage output or invincibility as well as allowing the slowing of time or a fear effect that causes the baddies to run screaming. These power-ups can really help you when you’re in a bind, but are required to complete the objectives given.

I don’t usually spend a ton of time on graphics but there was something really refreshing about PSC’s 8-bit meets 3d that resonated with me and I’ve grown quite fond of the way my little MERC buddies look while they scramble about shooting stuff. The sound design is retro and spectacular, with an unbelievably awesome soundtrack by chiptune artist Syphus. If you play this game and don’t get hyped up, you need to check your pulse. 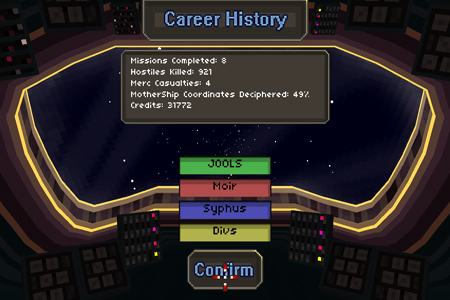 MERCs can die for good, these are the replacements for my first squad that included Ethan, Richard, Keith and Lamar. RIP buddies.

I Want It ALL!

I don’t have criticism for the game as much as a wish list that comes as a result of me being a spoiled American gamer that feels like his two cents are worth splashing onto a review (I’m going hate myself for writing these items down as much as you will). First, I was hoping for a bit more customization in terms of my MERCs outside of being able to name them and the light leveling up they do. It’d be cool to be able to give them each a specific weapon load out, though I am aware that since they all shoot at the same stuff it wouldn’t really be much of a change outside of a different graphical effect (plus the grenades may lose a bit of the attention they deserve). Also, despite Rich Edwards already speaking on the point about multiplayer and the difficulty of including that with a one man team, it’d be cool to play this game with other people. Finally, I wish I could give my MERCs hair. I named one after me and I have hair, but their baldness does not make for an accurate portrayal of an Ethan themed MERC.

Don’t get me wrong, I love my deep and engrossing tales about achieving one’s destiny and screwing princesses but games like Pineapple Smash Crew are the perfect combination of old school fun and innovation that make me remember (yes I’ll say it again) why I love playing video games.

Available on Steam, Gamersgate and Desura for $8.99

1 Comment → Pineapple Smash Crew Review: Nothing Fruity About These Mercs