So beautiful, so dangerous.

So you see this girl across the room. She’s beautiful, mysterious, and she’s motioning you over. It could go any direction from here, but right now you think you know everything you need to, right? Wrong! It’s not every day that I bring up my dating history on a gaming website, but there are a couple of relationships I’ve had that I think are worthy of noting here, for the sake of some of my own back-story.

I couldn’t believe it when I first met her. My friend Justin Bailey introduced us and it was like we’d known each other forever. We would run around for hours together, searching every nook and cranny of our neighborhood, looking for secrets that we knew had to be there. She was an expert marksman, master of ancient technology, and I’m pretty sure she could out-fly Han Solo on any day of the week. She was fearless, running head-first into lava-filled chambers with her arm cannon charged and ready to let loose a fury on any gray-matter based entity that might cross her path. We fought together for years. We explored planet after planet, eradicating space pirates and energy sucking parasites alike. We always knew what each other was thinking, acting on pure instinct and desire without needing to say a word. But then one day, she decided it was time to tell me her life story in her own voice… 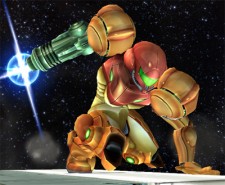 This is the girl I remember.

Who was this woman? Was she not the strong woman I thought she was? Was she not the warrior and battle-hardened bounty hunter I’d come to trust and believe in after all these years? This woman sounded like a terrified pre-teen who was pining for a man that she hated and that treated her like shit. I don’t have time for that drama, I really don’t. It’s amazing how much can be communicated by the intonation of a voice. In my head I always assumed she’d sound somewhat like a cross between Charlize Theron and Angelina Jolie, but that’s because they usually portray the type of woman I thought she was. She never took any crap from anyone before, so why start now? At least throw in a little sarcasm dammit!

Hannah Montana is not a bounty hunter

There it was, my relationship with my childhood companion, destroyed by hearing her voice. I am, of course speaking about Samus Aran’s appearence in Metroid: Other M. In my early days of gaming, I had no idea how much of an impact actually hearing my favorite characters speak could one day have on my experience. Back then you had to rely on your imagination and the “tone” of speech bubbles. That’s not to say that even better voice acting could fix Other M’s god-awful story, but I think I would have felt differently about Samus’ role in the game. Even just after hearing the differences between the English version and the Japanese version, I think she comes across as a very different woman. Her voice has some of the bite and urgency required to be the most feared bounty hunter in the universe.

Much more than just a pair of tan shorts 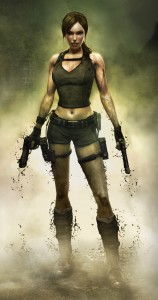 Voice acting in games isn’t new, however, and I really feel that some games got it right from the start. While Samus and I took a break after she defeated the Mother Brain for the second time (we’d heard all of each others stories by then), I began seeing someone else. She was rich and British and knew how to have a great time. Her name was Lara and she would take me on some of the most exciting adventures of my life. You could always hear it in her voice. She had this snide, nonchalant, do-as-she-pleased attitude that just permeated everything about her. Her silky smooth accent matched her curves and I couldn’t wait to hear what she’d say next. More importantly than her voice’s sexiness, however, was that her voice matched her actions. I felt that hearing her speak actually let me know more about her, helped me understand her motivations a little better, and made me get  just how much of a badass she really  was.

I’m even more excited about our next adventure together now that I’ve seen a glimpse of it. Hearing her transform from the girl in control of everything, to the girl who must survive, I know it’s going to be one hell of a ride.

This one is for you game developers. Voice acting matters, and it can mean the difference between an incredibly immersive experience, and a player who never wants to go near a franchise again. I still haven’t decided if I’m going to sit down and play through the rest of Other M even though Metroid is one of my all time favorite series, but you can bet your ass that I’ll be picking up Tomb Raider on day one! So remember what your mother used to tell you. If you don’t have anything nice to say, don’t say anything at all. Now I’ve gotta run, I have a date with Catwoman.

5 Comments → Gaming Crushes: I Loved You Until You Opened Your Mouth