Sweet setup. Not for everyone.

There I was, going about my daily life about to head home and spend some time with my family before playing an hour or two of my favorite new video game. I decided to catch up on the news of the day, in particular, gaming industry news, when I came across an article that changed my entire world and self perception. I’ve been comfortably defining myself as a gamer ever since I knew that the label existed, but I’ve been mistaken. According to a recent Bloomberg report, being a gamer comes with a certain budgetary barrier of entry and not only have I been going about my gaming all wrong, but I’m no longer sure I have what it takes now that I know how to officially become a gamer.

Did that come across as sarcastic and bitter? Good. Because anytime anyone attacks my hobby of choice with ignorance I’m going to defend it. Not that attacking video games and gamer culture is anything new; this report, however, hit from a different direction. In itself, it is not as malicious as some of the attempts at tying gaming habits to dangerous behavior with no evidence, but the report is presented in such a way that the “average gamer” is spending a dangerous amount of money on his/her hobby. Just another log to throw on the fire, thanks for that, Bloomberg.

By gamer you mean, a wealthy, uniformed family

First off, the title of the article doesn’t even match the goals of the research. It is presented as the cost of being a singular average joe/josephine gamer, when in fact the data was gathered based on a family of four simultaneously becoming gamers in San Francisco. Being versus becoming, solo versus family, average cost of living vs bloated San Francisco. It is these generalizations that do the most harm as the promotion of this article will never have the correct context given the title. Readers will just see that the average gamer spends $17,000+ on upkeep of the gaming lifestyle because, outside of gamers and concerned parents, no one is really going to dig into the details these figures.

It almost goes without saying that the individual purchase details are just as ludicrous as the final sum. The assortment of random gaming gear listed in the report barely makes sense unless you are talking about a family that is obsessed with just about every gaming genre for both their Xbox 360 and PC and needs top of the line accessories for both. From an over-priced PC ($4,000) with $350 worth of input devices (keyboard, mouse, joystick) it sounds like this family could really use the assistance of a few tech savvy friends that could easily save them 50% of their computer expenses. That kind of money reeks of a dedicated PC gamer, but a dedicated PC gamer would actually get a lot more for his money, as gamers tend to invest in their platform of choice, not all of the platforms available at any given time.

You could make the argument that the family is diverse and each member is dedicated to a particular platform, but even assuming that, I still can’t fathom why two $250 gaming chairs for the living room would be the way to go. Of course, this family also picked up two racing wheels, so there is some co-op, competitive racing going on, at least until the FPS fan kicks both of them off so the FragFX Shark (which I had never heard of) could get some use, but good luck to any of them finding playing time against the Rock Band fan that is spending hours training on the one musical gaming instrument the family has (that just happens to be a Pro guitar). Let’s face it, this hardcore family needs more than just one 60″ 3D television, they probably need 5  larger TVs in their enormous house that supports their Gears of War replica lancer battles.

Not helpful or usable by anyone, only harmful

Is the report out of touch? I’ve barely scratched the surface. Will this affect you as a gamer? No. Is the report worse than other attacks on our culture? Not on its own. We’ve made a lot of strides in the past few years against damaging-but-baseless reports and even had our content protected as artistic and political speech. I was just disheartened to see gaming painted as such an untouchable and expensive hobby and I hope it isn’t paving the way for a new series of alienating lies. 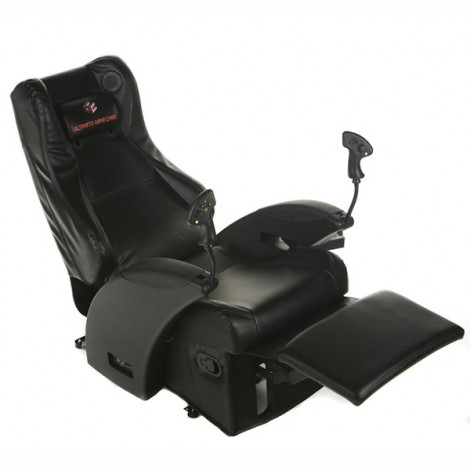 Go ahead and replace all of your furniture with a dozen of these.

Being a gamer can be expensive especially for those that have fallen victim to extreme obsessive behaviors that are painted as the norm for our culture. However, most gamers just make due with what they have and focus on what they love. As someone who grew up with playing games on the hand me down televisions of his parents and huddled around tiny screens in dorm rooms for local competitive matches, being a gamer is only about the games. Everything else is a luxury. That expectation is the norm. Sure, we all want better experiences using the latest technology and can afford them as adults with jobs, but those upgrades only happen when the budget is there and you pick your upgrades carefully, not all at once like this made-up family in the report who decided to go from never gaming to owning more than anyone could possibly need.

It is an amazing time to be a gamer. The technology is more immersive, game genres are exploding at the seams, the indie game scene is creatively challenging bigger studios, and staying in the comfort zone of your favorite titles is more fulfilling than ever. It is unfortunate that Bloomberg didn’t take the time to get to know these individuals and families that are actual gamers since they could have removed the stigma of gamers being unrelatable creatures that Bloomberg unintentionally added to.