The latest installment of the Assassin’s Creed franchise takes you on a journey in which Ezio Auditore’s story is ending. He’s much older and somewhat “retired.” Yet, in Assassin’s Creed: Revelations, he will find himself in one more adventure and a race against time. What about Desmond Miles? He’s been the “puppet master” in the Animus as he has relived Ezio’s life. AC:Brotherhood left everyone on a cliffhanger, so finding out what happens to him is equally important. Then, you throw into the mix Altaïr Ibn La-Ahad, the protagonist from the original Assassin’s Creed. How do these three come together in what looks to be Ezio’s final adventure?

Desmond is forced back into the Animus as before, but it’s not quite the same. He’s slipped into a coma after the closing events of the previous game, and the only way to work him out of this coma is to place him back into the Animus. He meets up with Subject 16 in the Animus and finds out he’s in the Animus’ “safe mode.” The only escape from safe mode is to attach himself to a significant memory of an ancestor. You guessed it. Desmond will live through another memory of Ezio, and he’ll be forced to do so if he wants to get out before the Animus becomes “aware” of what he’s trying to do.

Not only will Desmond relive the memories of Ezio one last time, but he will also have the opportunity to rediscover himself. I had a hard time getting behind this part of the game, because while it was interesting to learn more of Desmond’s past, it was done in an awkward manner. You will play in first person mode and be forced to solve various puzzles. It strikes me as a crossbreed of a couple of popular games, but it feels out of place in Assassin’s Creed. 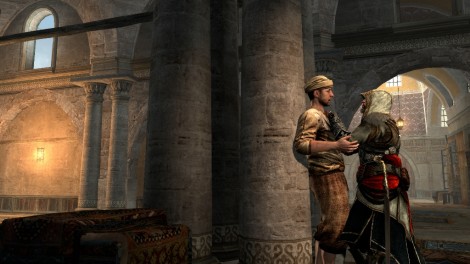 "Where is Hair Club for Men? Where?"

As stated before, Ezio is aging quite a bit. His hair is gray. He just looks tired. In a way, he kind of looks like my dad, but he much deadlier. Ezio is on a pilgrimage to unlock secrets about the Assassins. He is travelling back to Masyaf to search for Altair’s library. The library holds the secrets of the Brotherhood. Of course, with Ezio, nothing ever comes easy and there are 5 keys spread across Constantinople. Unfortunately, the city is also under threat of Templar influence.

The controls are still fluid as before with some subtle improvements. The sequence of buttons to press seem to be more fluid and less confusing. Ezio also gets the hook blade early on to be able to reach higher than he was able to before, and when jumping from roof to roof it can often become the saving grace from falling. Fighting has been improved as a result of the great control scheme.

The newest addition to Ezio’s arsenal are bombs. Crafting stations are placed throughout the city and other hideouts. These crafting stations allow you to combine different cases, powders and elements to create the perfect bomb for you or your mission. Bombs can have a variety of effects such as distraction, smoke screens, poison or explosions. There’s something to be said when you toss a poison bomb and poison a large group of guards and watch them all flail about helplessly. 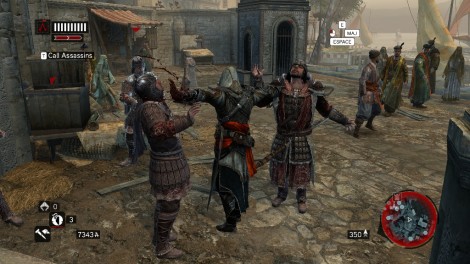 Ezio is still a mentor, and he is still very much involved with recruiting new assassins. The recruiting process is largely repetitive. Save someone. Recruit them. Help someone. Recruit them. The missions for assassins are slightly different. There are cities throughout Europa that are under Templar control, and as you complete missions in other cities, you can slowly turn them to Assassin control. Once you assume control, you are responsible for continuing missions or risk a Templar attack.

This secondary game is more of a tower defense game. Once your notoriety reaches a certain point, it becomes possible for Templars to attack one of your hideouts. When this happens, you find yourself on a rooftop, directing teams of assassins to fight waves of Templar soldiers. This is perhaps my least favorite part of Ezio’s gameplay; the tower defense seems out of place and more of a hassle than a game. You can avoid these games altogether by keeping your notoriety down or ranking assassins to a “Master” position, in which case, the hideout becomes immune to attacks.

As Ezio uncovers the past of Altaïr and the Assassins, you will get to play as Altaïr once again to relive his memories. These sequences are short and, at times, leave you wanting more, but they give more insight to what happened to Altaïr after the end of the first Assassin’s Creed. Altaïr ages into a much wiser assassin after the events of the game, and you find that things were never easy. You find how the Apple of Eden affected the Assassins and Altaïr’s life. The gameplay and controls are exactly the same as when you play Ezio, so everything is fluid between this story arc and the main story. I won’t go too much into this story as it’s best served as a mystery to you. This story, however, gives you clues as to what is hidden in the library as well as the origins of man. 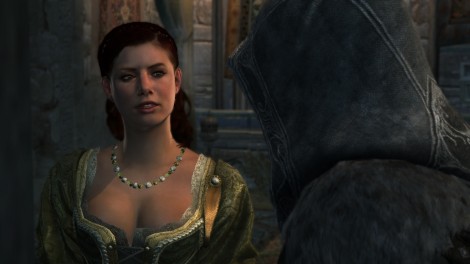 The single player story is a little less impressive than the previous two installments of Assassin’s Creed. It definitely feels as though the laws of diminishing returns are creeping in. The game ends on less of a cliffhanger, and it definitely closes out what is to believed to be the tale of Ezio. I left the game wondering what is coming next from Ubisoft and the direction it may take. It’s selfish of me to hope they take an extra year to really do the story justice rather than turn the game around in another year, but I really think with the new direction this series seems to take at the end of this installment it would benefit greatly from that.

There’s no doubt in my mind a lot of effort was placed in improving the multiplayer aspects of Assassin’s Creed. Brotherhood was the first attempt at multiplayer, and it was well-received. With great reviews, more efforts were made to allow players to customize their multiplayer presence. Players can now identify themselves with titles, and more customization is available for classes and character personas. The matchmaking element has also been improved.

The controls have been improved as well. Better target tracking and warning notifications makes the game more accessible, and more controls are available to make combat more exciting. Players can do more to resist their own assassinations as well as have more ways to take their targets down.

The maps, improved controls and additional features make the multiplayer a great experience, and multiplayer is definitively the most improved aspect of Assassin’s Creed: Revelations. 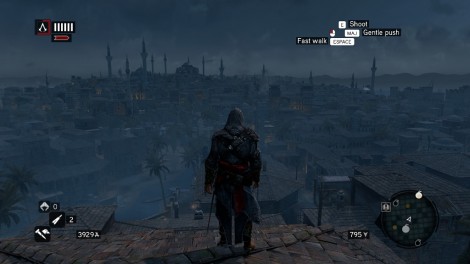 It's a sad day when you realize you can't remember where you left your horse.

Assassin’s Creed: Revelations shows signs of sequel fatigue. The single player story does not seem nearly as in-depth as its predecessors, and the mini-games only seem to accentuate this fact rather than hide it. The multiplayer part of the game is greatly improved, and you can easily lose yourself in the action and suspense of it. As mentioned before, it’s my selfish hope that Ubisoft allows more time to build out the next single player story before releasing the game because it’s been my favorite part of the series. The game, as it stands alone, is a good one. Perhaps it’s a little unfair to compare it to its prequels, but each game set the bar so high that I entered this game with high expectations. Assassin’s Creed: Revelations is a solid, fun game, but feels like the same old thing.