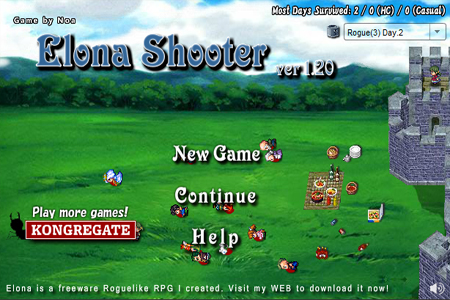 During my imaginary childhood, I lived in a tiny house that was constantly under attack from a who’s who of farm animals that had wandered over from across the road. The sheep head butted my walls, the chickens threw eggs at my windows and a strange race of bipedal mice sprinted towards me while brandishing their overgrown mouse teeth. It was horrifying, but my psychologist suggested dealing with the scenario head on, which is why Elona Shooter (by noanoa) was such convenient browser game to stumble across. After playing for a while, I felt like the game was made specifically for my love of defending things and the aforementioned made-up boyhood trauma.

Elona Shooter fits within the “shoot a ton of things from a stationary position” genre that I love almost as much as tower defense (those familiar with “The Last Stand” series will recognize what I’m speaking about here). The things you shoot happen to be the animals I referenced earlier but the interesting aspect about these armies is that they’re led by human commanders. This means that either a.) the animals lost confidence in their animal commanders and saved up for a person to lead them or b.) the human commander is a crazy. Either way, it’s pretty entertaining to shoot at the kind of creatures that people tend to befriend or eat in similar games. 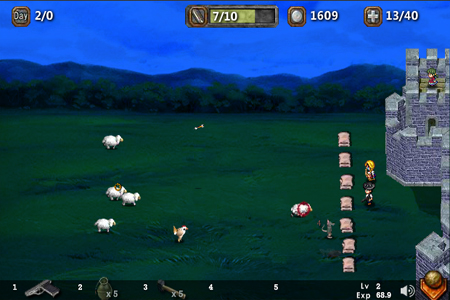 You'll itch so bad if those sheep make it past your defenses.

Apparently, Elona stands for “Eternal League of Nefia”, which happens to be a roguelike game also created by noanoa, though Elona Shooter’s only commonality with Elona seems to be the sprites and other graphics used. I checked out the roguelike Elona after connecting the dots and it happens to be a solid game as well, but this is not Cheap and Dirty Gamer: Let’s Talk About Two Games, so I digress. Anywho, Elona Shooter is a great time waster not only because of the solid animal shooting mechanics it has, but also because it features some RPG elements (like progression, classes and party management). Add an item shop and smithy to any game and you’ve got my attention (unless it’s Halo).

So congratulations, you made it to the point in the article where you go and play the game and send an air high five my way (no air hugs, I don’t know you and I’m sure you’ll linger).