Star Trek Online, the only MMO I’ve gotten a character past level 50 in, just went free to play this week. Sure, this is probably only exciting news to those of us who know what a warp nacelle is, but I’m ok with that. I’ve run into less douchebags in STO than any other online RPG.

Having played the game off and on since it’s launch two years ago, I can honestly say that the game is definitely worth playing if you A: like Star Trek or B: like “tall ship” combat in space. Maneuvering your Excelsior class starship to bring your broadside phasers to bear on a Klingon Bird of Prey never gets old. That’s a good thing, since you’ll spend half the game flying around shooting shit. The other half you’ll spend running around on the ground shooting shit. The ground combat, while not quite as tactically deep, is made much more pallatable by the recent inclusion of a first-person shooter mode.

There’s the biggest rub with STO. In a single mission, you can experience more combat than every episode of all the Trek shows combined. Of course, there are some diplomatic missions and a smattering of boring “scan this, scan that” ones as well. The meat of the game comes from the action, though, which will turn off some people looking for a more “Roddenberry” Star Trek experience. 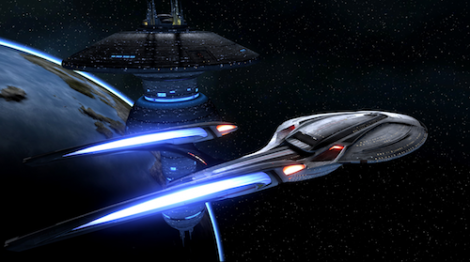 I did get some time last month to try out the early-access F2P features, and boy has the game come a long way since launch. The inclusion of a very addicting new crew management mini-game, as well as redesigned starting areas for both the Federation and Klingon factions should make for a much better first impression for new players.

You’ll also find that this game really is free to play. No purchases are necessary to enjoy the game from Ensign to Vice Admiral. There are plenty of options to buy goodies with real money, like starship and costume variants, but they are absolutely not required to advance or be competitive.