Media Ball was conceived as the perfect aggregate of all things entertainment. It’s creators (who are now dead) even went as far to coin the now infamous Media Ball catchphrase “It does it ALL”, ignorantly underestimating their cybernetic sphere’s capacity to truly do it all. What started out as a platform for games, music, social networking and popular shows like “Single Guy in Chair” and “Fat Guy and Pretty Girl” eventually led to Media Ball’s domination of the world. Tragically, humanity was no match for the intuitive supercomputer as their brains had already been reduced to mush, the result of hours upon hours of intellect assaulting IPs and advertisements. 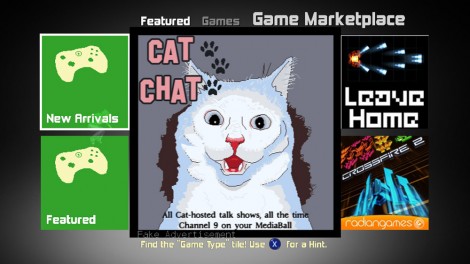 My wife would actually kill for a real life version of "Cat Chat"...ok, I guess I would too.

Fortunately for future generations, a lone hero, too preoccupied with practicing her parkour skills to fall victim to Media Ball’s devious plot, stepped forward to combat the threat and restore peace to a world overrun with flesh craving eco-friendly SUVs and giant (yet delightfully tasty) enemy crabs.

Game Type may have begun as satirical commentary in reaction to Microsoft’s neglectful handling of the Indie Marketplace, but the in-your-face tale of Hoodie Girl’s SHMUP themed quest is one you can’t miss. Whether you’re a fan of sidescrolling shoot’em ups is irrelevant, as simply navigating through the many screens to get to the actual game is worth the measly 80 points it costs. I literally laughed out loud at both the process required to find the game (which is a mini-game in and of itself) and the hilarious fictional advertisements strewn throughout.

However, I couldn’t validate a Cheap and Dirty Game based solely on the awesome sense of humor that its developer, Mommy’s Best Games, possessed. Not to worry, as Game Type  is actually a pretty fun yet simple score attack style SHMUP with enough nuttiness to keep your eyeballs glued to the screen. For those unaware of what SHMUPs are all about, you essentially float around in the air and shoot everything that comes your way. In the case of Game Type, enemies include the aforementioned SUVs and Crabs as well as exploding donuts and the citrus-themed symbol of Mommy’s Best Games’ take on Apple. If this sounds somewhat similar to a guilty pleasure (Serious Sam DD) I wrote about in August, that’s probably because MBG was responsible for as well. 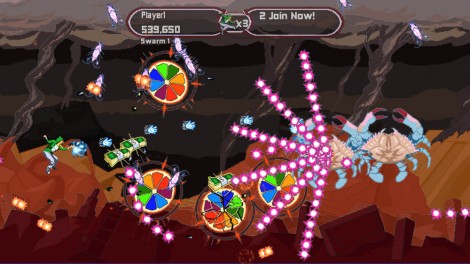 *As of the publishing of this article, a new version of Game Type is going under peer review with fixes to a high score bug as well as a rebalancing of weapons and some overall polish on the actual SHMUP).