When Star Trek Online was first announced, my imagination ran wild with Trekkie dreams of manning stations with my friends to operate our own multiplayer starship. While I think STO ended up being a fine game, my multi-crew dreams were squashed by a very single-player ship experience. 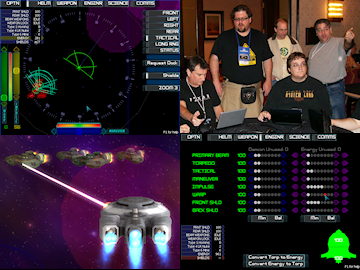 Revenge is a dish best served cold, and it is very cold in space.

The game was released last year, but with Tuesday’s major update and the lack of site coverage, I thought it was a great time to let you all know about it.

I need to tell you up front that I haven’t actually been able to put my own crew together yet. However, I have seen the game in person, and I’ve watched the development from afar since its early days.

Artemis is a 3 to 6 player game in which each person fills a role on the bridge of a starship. You have your Captain and his view screen, just like in Star Trek, who gives the orders to the rest of the crew based on his macro-view of the action. Then he is surrounded by crew who, with their own screens, man the Helm, Engineering, Communication, Science and Weapons stations. Together, you must coordinate to complete missions and defend the galaxy from alien threats.

Check out this hilarious video of the game in action by the crew at LaughPong.

You can play Artemis online, but this kind of game just begs for a LAN session. Since the game has super low system requirements, you can probably all just use your laptops. There is a demo that lets you use two of the stations, or the full version can be had for $40. That’s all you need to run the game on all 6 stations.

I hope to get the Horrible Crew together for a session soon. We’ll be sure to capture some video of that.

Also, if you’re interested in getting the game for free, Thom has posted some details on this page on how to do that.  Basically you just need to make a video of you and your friends playing the demo. The game gets some exposure, and you get it for free.