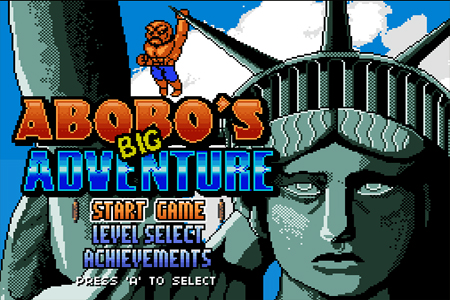 You can't get anymore patriotic than hanging from sexy Ms. Liberty herself

The interwebs have been exploding with previews, trailers and all around glee at the arrival of the NES love fest that is Abobo’s Big Adventure. Despite the NES being the system that helped launch my obsession with gaming, the gods of ethical journalism have warned me about simply following the hype and praising this game without any sort of objectivity. Then I booted up the game and I literally pooped my pants, Abobo’s Big Adventure is exactly what Cheap and Dirty Gamer is all about, and will go down in entertainment history as this generation’s Citizen Kane.

Those that think this is a game about a northern suburb of Abidijan in the Republic of Côte d’Ivoire may be a bit disappointed when they actually sit down to play the game, yet should those same individuals have an affinity for classic gaming then their disappointment will be very short-lived. On the surface, Abobo’s Big Adventure is a mash-up of the mechanics and art styles of some of the best games the NES had to offer, but dig a little deeper and you’re presented with a story about loss and redemption. 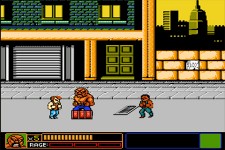 That barrel is no match for Abobo

Historically, Abobo was known for being a brutal street thug in the Double Dragon series of games and the only enemy that neither Billy or Jimmy Lee could throw. What people may not have known was that Abobo was also a family man and had a son named Aboboy. This Big Adventure begins with a lapse of judgment on the part of a couple of video game lackeys who decide kidnapping Aboboy is a great idea. After playing the game and seeing the destructive power of a heart-broken Abobo, it’s quite clear that great idea was actually the opposite. Despite that fact, game enemies from a variety of different titles, including Super Mario Brothers, Contra, Mega Man and numerous others have joined the anti-Abobo plot and brought with them not only their fellow minions but some of the worlds they inhabit.

The game is oozing with classic Nintendo gameplay and stays true to form in terms of controls and difficulty. I had fun with it but did struggle at times, most likely because I felt inclined to test my classic character identification skills as I went from level to level. The conglomerate of creators, including I-Mockery, Pesto Force and The Pox Box really did their homework but didn’t let constraint ever be an obstacle as neither Abobo’s skills or his adversaries ever strictly adhere to their source game’s foundation. This is most apparent with Abobo himself as he has an Armando Muñoz like ability to adapt to both his surroundings and opposition.

I can’t say enough about this game and honestly, would prefer not to as I want to jump back on and start playing again. It’s hilarious, it’s fun and it brings back fond memories of the days when the only people yelling at me during cooperative play were those sitting in the same room. We’ve talked about finding ways to introduce this generation’s gamers to the golden years of last generation and I think that this game, along other browser-based labors of old school love (like Super Mario Crossover) are the perfect candidates to do this.

2 Comments → Cheap and Dirty Gamer: Abobo’s Big Adventure is a Beefcake Sandwich with a Side of Vengeance Fries