When I set out to race motorbikes, I only do so in full arenas filled with glowing people. You won’t see me in the X-Games, or on the Dew Tour. I gather some close companions who don’t really matter one way or the other and race against the clock. It’s not a hard profession but sometimes it can be very difficult to be successful. Thanks to the lessons I learned from Excitebike, I can always strive for the tallest podium with the number one etched on the front. 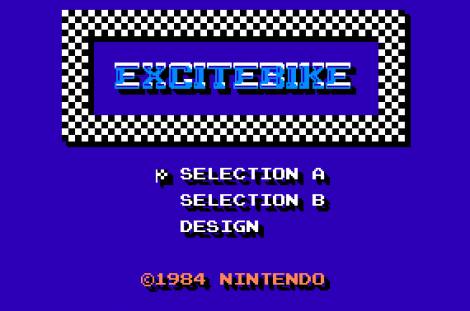 The Lessons of Excitebike

Pay no attention to the other racers 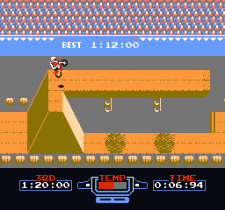 Forget about the other racers

I learned something today. In most races your goal is to be the first one to cross the finish line. Whether it’s against 10 opponents or just 1, being the first is the only option. Yet there are some races out there where it doesn’t matter what the other dudes on the track are doing. Some of them might be going really slow or wrecking all over the place. Others will be jumping out of nowhere and landing right in front of you. In real motorbike racing, you don’t have to pay attention to the other racers. The only thing you need to worry about is avoiding running into them. They can be bastards on the track but crossing the finish line before them gives you absolutely no bragging rights. You just have to beat their fastest time. Though you could get in front of your opponents and cut them off causing their bikes to crash. Again, no bragging rights but that is satisfying. Thanks, Excitebike.

Be Mindful of your Gas

I learned something today. When driving a car the only way to go faster is to press harder on the gas pedal. Letting off the pedal permits the car to slow down. It’s a pretty simple system that has been in place for nearly 100 years. Did you know that when you drive a motorbike that there are two configurations of speed? One allows you to remain at a pretty constant pace and keeps the engine in top shape. The other setting gives you an enormous amount of speed but it takes a toll on the engine. You can only use this speed intermittently unless you want to be on the side of the track kicking and cursing your stupid bike. Not to mention that there are no brakes on a motorbike. Letting up on the gas is the only option, which doesn’t bode well for maintaining a crash free record. Thanks, Excitebike. 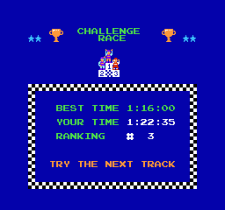 I learned something today. The most annoying thing on the road besides pedestrians and bicyclists are speed bumps. Not surprisingly those little assholes find their way onto motocross tracks as well. I don’t quite understand the placement, though. Speed bumps are meant to slow drivers down in the suburbs or in parking lots. Isn’t the point of a race to go as fast as you can? Don’t worry, I have found a way to defeat these nemeses. When you go to a club, what do you do? Pop bottles. When you want to make little kids cry, what do you do? Pop balloons. When you want to avoid a speed bump yet still travel over top of it, what do you do? Pop wheelies. It will save you the time it would take to avoid the bump as well as give you the appearance of a bad ass biker dude. Thanks, Excitebike.

There aren’t many people out there today racing motorbikes. Sure we’ve had our Manias and our Madnesses, but when you really want to learn the important lessons about racing two-wheel machines you need to go back to the original. You’ll learn things never before thought possible. Thanks, video games.