On Christmas Day, my wife presented me with an unexpected gift: Kinect. While it’s been out for some time, and many “hardcore” gamers loathe it entirely, I had it on my list, but because budgets usually come into play, I really didn’t suspect I’d be getting the device. I thought the Kinect, with two young children in the household, would present new gaming opportunities as a family and introduce gaming at an early age. My son consistently brings up the yearning to play more games with Dad on the Xbox 360. So, the Kinect is an opportunity to get us there, and it has already delivered in short time. Recently my family and I stood up for a rousing game of Fruit Ninja Kinect, or in my son’s terms, Fruit Ninja SLICE. 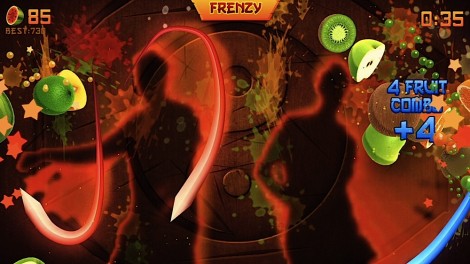 My son, despite being 5, is almost as tall as me. True story.

Slice quickly. For There is Always More

A dashingly handsome man once said as he selected Fruit Ninja Kinect from the Xbox 360 dashboard, “Slice Quickly. For there is always more.” Quickly, his young pupil said, “Oh yeah.” They both went to work on slicing down hundreds of fruit while avoiding bombs. The man and his pupil went to work quickly and like a flash they set a new high score. The pupil cheered, jumped and sliced the air with no remorse as countless fruit halves fell off screen. The man and his pupil then began adding acrobatic moves to their repertoire by jumping and spinning in between slices. Much fun was had that day.

That dashingly handsome man was myself. In stories I tell I always picture myself with a strong jaw, broad shoulders and a handsome pair of dimples which can move mountains. Truth is, I’m kind of tall, have big teeth and am a little “gangly.” I digress. My son and I were able to jump right into a game and sure enough, within a couple of minutes were able to rack up a high score. The simplicity of accessing the game and getting into the action is exactly what we needed.

Gaming From a Child’s Mindset

It’s no secret that children play video games for completely different reasons than adults. As adults, we tend to get bogged down in the little things like achievement hunting or divulging ourselves in every single side mission to get the “whole story.” Children play games for the interaction. They want to do something, whether it’s push a button or, in this case, slice your hands through the air and cut virtual fruit.

It’s refreshing at times to see how my son gets so into a game with such a simple premise. He yells out with excitement as we’re slicing our way to a new high score, and when a bomb flies onto the screen he stops mid-motion and orders me, “Stop! Don’t want to hit that.” The moment the bomb disappears he goes back to doing what he does best which is flailing wildly. If anything I think this game will at least teach him to flail with “chaotic control.” My picture frames and other trinkets could use it.

After a couple of rounds of playing with my son, my 2 year old daughter comes into the room and sees what we’re doing. She never really played a video game before this day, and she asks to play. My son concedes his spot, and she walks up to the play area. I help move her closer to the Kinect sensor to locate her since she’s about half his size. Finally, the Kinect recognizes she’s joined the game. We start the round and go about our work. She has only two moves: jump and slice…and slice. Either way, it was a hell of a lot of fun watching her go. I finally got the chance to play video games with my daughter. Thank you, Kinect. 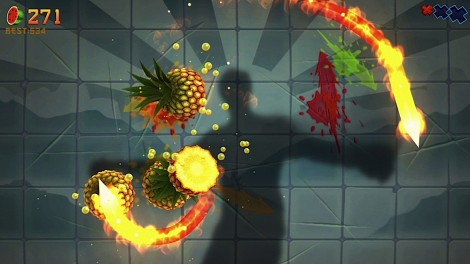 Many fruit were harmed in the making of this post.

Despite what that pesky food pyramid (or my plate) says – fruit has had little meaning to me. Personally, I prefer a manly meal of bacon, ham, bratwursts, bread and beer. My plate is awesome. Again I digress, however, but look at how fruit now has meaning for me and my family! That meaning is fruit is now here for my family to slice and dice with our bare hands. What better way to enjoy a watermelon with my son and daughter?