I found myself dealing with a conundrum this past holiday season that only obsessive gamers with steady cash flow and extremely generous relatives ever have to deal with; I didn’t know what game to play. I know, first world problems, etc, etc. Don’t worry, I’m not emotionally unstable as a result, so save the STFU for the Facebook profile of someone devastated over the Kardashian divorce.

Between acquiring the gaggle of threequels as gifts and having barely scratched the surface of Skyrim, I was stuck at an impasse as I stared at my monitor. There was just too much to play, and I was struggling to commit, which is why my decision to ultimately play through Rage struck me as a bit odd at the time. 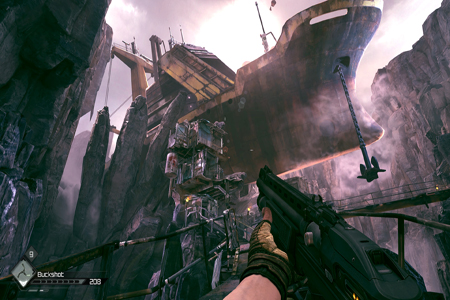 There's actually quite a bit that's odd about this game.

I think it’s fair to say that Rage wasn’t exactly a success, thanks mainly to what I consider some unfair expectations and a pretty abysmal technical debut on the PC (which is where it should have shined) didn‘t help. Some people actually seemed to be pretty pissed off about the game while others argued why those that were pissed shouldn’t really be all that pissed. In my opinion, missing out on Rage is something you’ll regret, but not because of the beautiful vistas or the enemies’ creative means of avoiding gunfire.

I get it, Rage has been out for a while and perhaps it is hypocritical to look back on a game I was luke warm about and attempt to validate its place in your extremely cramped gaming schedule. I guess I’m regretful, too, as I allowed some release-day hiccups (that, frankly, we should all be used to by now) get in the way of fully experiencing one of the best examples of the classic FPS to date.

Rage’s graphical innovation seemed to create assumptions that it was also going to have extensive amounts of mechanical innovation as well, which I don’t believe was ever the case. Rage was the summer blockbuster of games this year, and yet it suffered because it got lumped in with story-driven, open world games? That doesn’t make sense and I believe this attitude has robbed people of some really exciting gameplay moments. Perhaps the marketing and hype was confusing, but ignoring a solid shooter experience makes you pretentious. Sorry folks, not everyone wants to cycle through conversation choices. 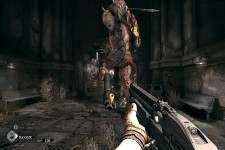 This may not play out as well as you'd hope, but it sure looks cool!

It’s the little things that get overlooked so much in this game, subtle nuances that bring back that feeling of nostalgia that modern gaming aficionados often refer to as “laziness”, a viewpoint that can easily be put back on those that need every little detail about a story or setting worked out for them in a nice, neat little package. While Rage doesn’t have a ton of huge set piece battles like  Modern Warfare or Halo have, I still can’t get a few extremely well done scenarios out of my head regardless of whether or not I had a choice in how they played out or the event itself effected my avatar’s morality. The trailer for the mission in Dead City revealed a very good example of what I’m talking about and without spoiling things, you have a couple really huge problems to deal with while roaming around that area. The area itself leaves a lot to the imagination (rather than a lot to be desired), which to me, is the best thing a game can do. Sure, you may never know what life was like before Dead City became, well, dead, nor will you have a conversation chock full of options with a Dead City survivor. That’s ok, because despite what some may say, evoking emotion is not relegated to intense character interaction or a timeless tale.

Meat and potatoes with some additional surprises.

While the game has its fair share of exciting scripted events, it is the non-scripted battle sequences (like the one mentioned above) dictated by your combat choices that highlight what really makes Rage a game you’ll remember. Now don’t misunderstand me when I say “non-scripted”, Rage is still a corridor shooter through and through but, despite the straight forward path you take or how the battles initially begin, the action from that point forward takes a wild turn depending on how you decide to take enemies down. The weapons themselves are incredibly well designed and are extremely fun to fire, but their varied ammunition can alter a straight-forward fight in a dimly lit hallway into something that makes a player exclaim “Holy S***, that was awesome!” The introduction to the mind control bolt was one of these situations, and controlling a person’s movements up until the moment they exploded just sits well with me. Sorry to be a bit morbid but it was really freaking cool. 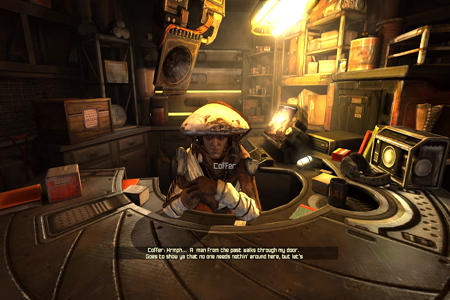 Only having to only press one button to purchase items is never a bad thing.

Let’s not forget about the engineering items and the way they add yet another layer to an incredibly deep combat mechanic. I mean, come on, when’s the last time that you cut someone’s head off with a bladed boomerang and then steered an exploding RC car into a group of enemies while your robot spider buddy shot up any stragglers that attempted to flank you? Once everything is hitting on all cylinders, there’s a smoothness to Rage and the way you interact with enemies that I have yet to see in other games. Being flat-out overwhelmed by mutants in an abandoned Subway tunnel is terrifying but not exactly unique, yet deploying your arsenal in an especially effective combination is satisfying and gives even more weight to a relatively common video game scenario.

The complaint that Rage doesn’t offer much choice for the player in terms of story is true, as the tale around the game play is completely forgettable, but is it so hard to imagine the player possessing a respectable crafting tool that isn’t related to the story? Some games paint a memorable experience with interweaving plotlines, Rage effortlessly does it with death and destruction in a way that should not be missed.

6 Comments → Gaming Regrets: Not Playing Rage is Not an Option