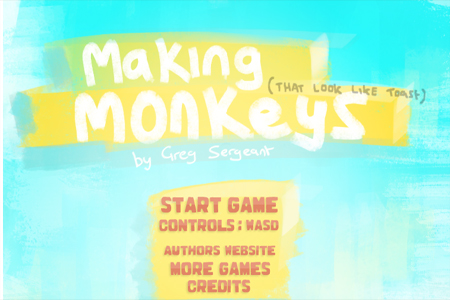 I love toast an monkeys, combining the two only makes sense

Ever since stumbling across Baby Monkey (Going Backwards on a Pig), I’ve yearned for the arrival of another monkey-themed game with a parenthetical description of the protagonist(s) in the title. It goes without saying that I was pretty freaking excited when Making Monkeys (That Looks Like Toast) came into my life.

The game features a story that is not unlike Hemingway’s Old Man and the Sea, a tale that highlights the struggles of a hero trying to achieve a goal while constantly colliding with adversity.  The monkey (who does, in fact, look like toast) has discovered the exhilarating drug known as coffee after a cup happens to fall from the sky. Becoming instantly hooked, he sets out on a quest to find more of the dark, rich liquid but soon finds out the journey is more difficult than he thinks as many different traps and barriers stand in his way. Fortunately for him, a cloning gun also happened to fall from the sky, thus allowing him to clone himself to overcome the aforementioned obstacles. 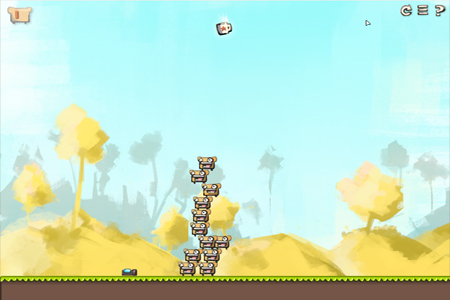 Struggling with the puzzles? Just stack a bunch on monkeys on top of each other...the sky is the limit bros.

It’s a pretty simple game that is great for a short jaunt of play in between business-related meetings, child care or acts of thievery. It’s not long, but would you really want Mr. Toast Monkey to constantly struggle to find coffee? If that’s the case, then you’re sick and have obviously never tried to jump over a pit full of spikes while fighting caffeine withdrawal. The best thing about it is that it’s free, well the BEST thing is the monkey, but being free is a close second, almost a 1.5 placement, if you will. Go and play this game right now, RIGHT NOW!!!