Mommy’s Best Games, developers of Serious Sam Double D and Shoot 1UP  “who strive to deliver games that push the edges of the medium through gameplay, art, satire, and pie,”  is thrilled with the new Xbox 360 dashboard update. While the Xbox Live Indie Games store itself is a bit buried, it seems as though Microsoft has been helping promote MBG’s new game, Game Type higher up in the marketplace. 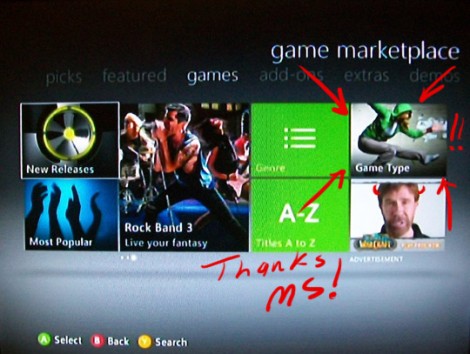 What are the chances?

“I’ve been thrilled Microsoft created the special dashboard tile just for our game. It’s such a terrible name which I created as a placeholder while starting the project.” reveals lead designer Nathan Fouts. “With the incongruous stock photo of a woman in a hoodie doing a jump-kick, and the forgettable ‘Game Type’ title, it’s good to know Microsoft was advertising our poorly-named game, and not trying to label the console’s entire digital game storefront. Otherwise, it’d be a horrible match that would simply make no sense and generally lead fewer gamers to find the store and browse on their own terms.”

During the previous Xbox 360 dashboard update, the XBLIG channel had been buried to a point where developers were concerned that no gamer would be able to find the store, let alone their games. Microsoft eventually moved the store to help make it a bit more visible, so it’s nice to see that they didn’t repeat their mistake. Otherwise the indie development community may have to take it upon itself to create its own unique way of drawing attention to such a moronic move like for example, creating a game that directly plays off of the issue.

Catch the trailer for Game Type a shoot em-up starring  Hoodie Girl in her battle against MediaBall below. The game is currently available on XBLIG.