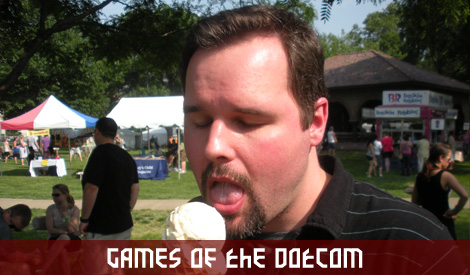 You know it’s been a good year for video games when you’ve got sequels to 2009 GOTY winners sitting in shrink wrap on your shelf. I’ve spent less time bitching about bad games this year than any other. That’s not to say that there weren’t plenty of crappers, but I was just too busy having a great time with dozens of quality titles.

I might not have played everything, but from the games I did, the following were my personal “Goaties”. 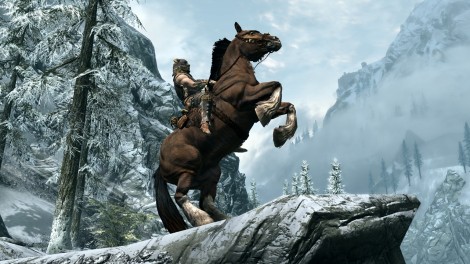 I had a horse like this. His name was Air Bag.

1. The Elder Scrolls V: Skyrim – Wow. This isn’t just the best game of 2011, it’s the best game I’ve played in many years. Here’s a perfect example of refinement and evolution. Daggerfall is not a wholly dissimilar experience from Skyrim. Bethesda took that formula and kept adding and subtracting ingredients over the last 15 years until it had created an elixir with the power to delete entire weekends from your schedule. This is the new standard for open world games, role playing games and anything with a sword and sorcery setting.

I eventually killed this guy with 50 shots from my tazer.

2. Deus Ex: Human Revolution – What a perfect apology for Invisible War. For a big fan of the original Deus Ex like me, this was a very surprising treat. My expectations were decidedly tempered before playing this, and completely blown away after. The story was compelling and the cities were alive. The gameplay was the real winner here, however. Many games promise multiple pathways to victory, but very few deliver an exciting, rewarding experience in practice. HR was most definitely a standout exception.

3. Gears of War 3 – In my mind, the best of the “threequels” and possibly the best overall value this year. The campaign was paced perfectly and somehow (in spite of the bullets, explosions and power armor) managed one of the most emotional scenes in recent memory. Like most, though, the majority of my time was spent with the amazing multiplayer. Hardcore Horde mode is just about the perfect test of friendship. If I haven’t choked or stabbed you by wave 30, you might be in my wedding.

Shit blows up real good in this game.

4. Battlefield 3 – Don’t ask me what happened in the campaign. I didn’t care enough to finish it. Or, more likely, I was too busy blowing up dudes in multiplayer with my Abrams. For me, the Battlefield series’ scope and pace have always made it king of the online shooters. So, seeing as 3 is the best Battlefield yet, it is my current go-to for online action. If you want the best experience BF3 has to offer, you’ll need to play it on the PC. 64 player Conquest on the game’s generously large maps is a real treat.

5. Portal 2 – Valve crafts single player experiences like no one else. They are always intimate, yet strangely uncomfortable. The greater plot details seem to always be just out of reach of your character. Portal 2‘s narrative doesn’t try to buck that trend, and is all the better for it. When the twists and reveals do happen, they hit hard. These games are supposed to be about the mind-melting puzzles, which are awesome here, but I blazed through this one for the story. Steven Merchant’s Wheatley steals the show with the best supporting character of the year.

The Best in Co-op

I also spent a ton of time playing co-operative games this year that weren’t necessarily the best, but provided lots of entertainment nonetheless. Some were great with my girlfriend on the couch; others were perfect with three of my closest friends at 2AM on a Friday night. Here are my five favorite co-op games from 2011.

I’ll still be playing 2011 games in 2013. A few will require a repeat play through after some of the finer plot details are forgotten, and I’m sure there will be a game or two still unopened (sorry Batman). Oh, and I just started playing The Old Republic proper. Even though it arrived too late for any nominations, I can tell you it is definitely shaping up to be something special. If you like Star Wars and Bioware RPG’s, you really should be playing this.