In a world of realistic portrayals of war-time violence, games often get overlooked as potential educational tools. Growing up with computer games like Oregon Trail, Where in the World is Carmen San Diego?, Geometric Golf, and Number Munchers totally elminates that notion in my mind. There are games that can be great educational tools but don’t necessarily have to be played in school. While the games mentioned above might seem like tired examples, there is one game that came out in the fall of 2011 that children can learn from.

The Legend of Zelda: Skyward Sword is the latest release in the vaunted Nintendo franchise and I’ve been spending some time in the world of Skyloft. Sure, chasing after Zelda is the main goal of the game, but did you know that there are some lessons to be learned within the game that could be beneficial to children everywhere? Through the use of chores, and helping thy neighbor, Skyward Sword can teach you the basics of something everyone needs to learn and re-learn in this country: fiscal responsibility. 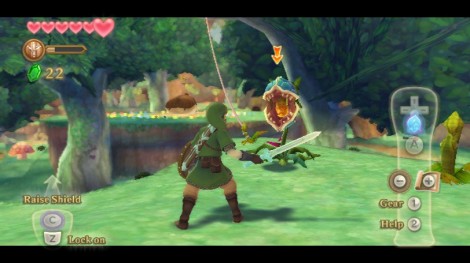 Leave the lawn unattended you get violent plants.

I hated doing chores as a kid, but I never realized what was earned from doing those menial tasks my parents wanted my sister and I to complete. My parents could have used the chores as an excuse for me to remain living in their house and eating their food (of which I ate a ton of). Instead, they would reward me each week with some money. I don’t remember the exact amount when I was a child, but later, during my high school years chore money turned into lunch money and it was $30-$40 a week. Then sometimes, if a new video game that I wanted was coming out, I would spend less money that week to save up for the game. If it meant splitting one breadstick or a leaf of salad, it’s what I had to do.

What a game like Skyward Sword can teach you is the value of doing chores. For example, in the game, your neighbor may or may not want the tall grass that occasionally grows in weird patches cut. No matter what your neighbor says, you need to cut the grass. Mowing the lawn in real life can often lead to surprises like rocks, sticks, and dog poop flying out from under the mower but in Skyward Sword Link is rewarded with hearts, Rupees (the monetary unit in the Zelda franchise), and sometimes, bugs to be captured. If your child is totally opposed to doing a chore like mowing the lawn, put them in front of Skyward Sword. Well, actually you should probably ground them to teach a lesson about doing what they’re told, but if you can make it fun, with the possibility of great reward, then your child might be more inclined to complain less.

Keep in mind that it is not very safe to mow the lawn with a sword. Not only will it take forever to get your desired results, your trees and bushes will also be wiped out.

In Skyward Sword there aren’t any parents telling your character (Link) what to do, though there are many characters who “need help” and implore you to do what they ask of you. You may not think you’re a dog, but you become excellent at fetching. Instead of being rewarded with another bone being thrown over your head, finishing the task usually results in a gift of some sort. Whether it be Rupees or a bigger wallet for those extra Rupees, most of the gifts are more than worthwhile. If you decide not to help your neighbors or people you meet along the way, you might never see any reward they could have provided you with, no matter what that reward might be. 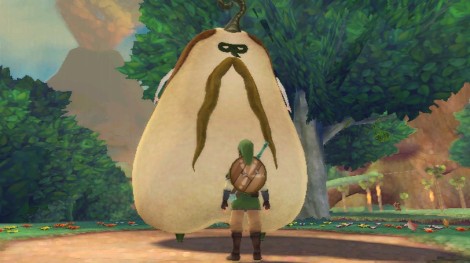 Help a stranger, get rewarded...sometimes.

While real life might not afford you a plethora of gifts when you help others, you definitely will feel better about yourself. That might be the greatest gift one can receive. Even though the characters in the video game world might be able to provide you with a reward for helping them out, many people in real life can’t. When you get out in the real world and help that old lady with her groceries, or give a homeless man some money to buy booze, your self worth rises. Not only does Zelda teach you how to save the princess, save the world, it teaches you to be a helpful neighbor to those who are in need.

After doing chores and helping people your child might have a decent chunk of change. You could teach your child to spend it as soon as he gets it, thus ensuring that this current credit situation our country is in remains. Or you could sit him/her in front of The Legend of Zelda: Skyward Sword and watch how your child learns that you need to save money to be able to afford an item you might want. For example, in every journey Link will need a shield. Have you ever tried to buy a shield? They’re expensive! By doing chores and helping neighbors, Link can save up some money to buy that shield. The lesson is: buy what you need, not what you want. Even though the shield might be what you need and want, skip over those Deku Nuts. There are plenty in the world for free.

Games aren’t always full of sex and violence. Sometimes they can be full of valuable life lessons. Saving money is an important thing to learn as well as being unselfish and helping others. It’s not the most glamorous aspect of video games or even the most popular, but if a child can learn something from a game that will help them become a contributing member of a greater society than by all means, play that game.