Orcs Must Die! Really? Duh, Robot Entertainment, tell me something I don’t know. See, I’ve had quite a bit of experience in dealing with the green skinned freaks and understand that their continued existence is detrimental to the betterment of man, elf and every other good guy fantasy race (except unicorns, f*** unicorns). I’ve killed thousands in games like Dawn of War 2, World of Warcraft and the recently released The Elder Scrolls V. As I’ve stated before, I’m pretty open-minded but there are races that I just don’t like and orcs are one of them. Fortunately for me, my prejudice is rewarded throughout the course of the aforementioned torture simulator.

The story of Orcs Must Die! is one that is quite familiar to anyone that happens to live on the outskirts of a creepy forest or directly next to inter-dimensional portals. An army of horrible monstrosities, composed of the game’s namesake and other nasty creatures want to cross over into the world of humanity through a group of magical gateways and the only thing in their path are the war mages, a group best described as the special forces of the fantasy world. You play as an apprentice of this coveted clan of mystical warriors and happen to be attached to the greatest war mage the world has ever seen. Unfortunately, the extent of your responsibility is increased rather suddenly as your master slips on a step and cracks his head open in the midst of battle, leaving the task of defending the gateways entirely on your shoulders. 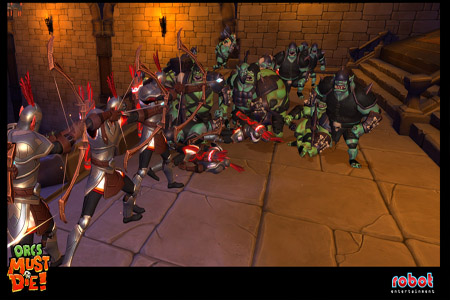 Seriously, I was ok with the pay grade limited responsibility of middle management

One noteworthy aspect of the story (as that clearly isn’t the focus) is the character you control. I absolutely loved his personality and it was fun to see a dimwitted magical character I could relate to. It’s pretty easy to miss, but there is some subtle growth to this character throughout your time in the game and you’ll learn to love his over the top ego once you realize that he’s essentially protecting the world by himself.

Kevin McAllister Eat Your Heart Out

The game’s premise is pretty simple: waves of monsters break down wooden gates, walk towards you and you do your best to destroy them before they get to the portals set up throughout the levels. The actual mechanics to the game, however, are pretty deep so don’t play this game with a tower defense strategy in mind. It all may seem like an overwhelming scenario at first (especially with the numbers thrown your way), but the incredibly diverse toolbox full of traps, magic and other weaponry you’re given access to more than makes up for the 250+ vs 1 odds. 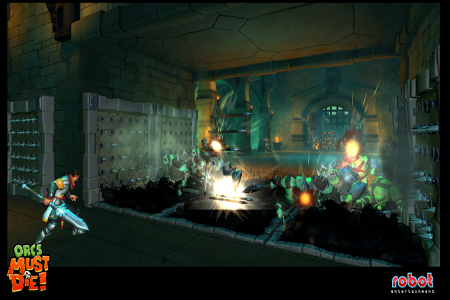 The bread and butter of your defense comes in the form of the many different traps you can set up before a round begins, ranging from spiked flooring and movement inhibiting tar pits to pendulums that can take out whole waves of enemies in one swipe. You start off with a limited arsenal, but over time you are introduced to more menacing and effective instruments of destruction which can be upgraded with the skull points you earn for meeting certain mission criteria. Most of these traps need a reloading period, which means that placement and timing is very important as most are completely useless during while reloading (which can seem like an eternity in certain situations). Laying down traps cost mana points, which are given to the player at the beginning of each stage. Mana can also be accrued by defeating enemies through utilizing traps, getting kill combos and scoring head shots which net you more mana than just hacking and slashing your way through your enemies.

Additionally, you have access to weapons and magic that your character can use to directly combat enemies, which comes in handy when they slip past your traps during reload times. These weapons range from a bladed stave and crossbow to amulets that give the player access to elemental attacks. Every weapon has a secondary function which uses more magical power and tends to favor group attacks, something that comes in handy when you find yourself in the weeds. My favorite was the acid bomb that arrived with the Elements of Power DLC. There’s just nothing better than melting Orcs and if such things gave me a boner, I would have had a million boners by now.

A Parade You Probably Shouldn’t Take Your Kids To

Setting up all those traps would be pretty pointless without a bunch of baddies to exterminate and Orcs Must Die! masterfully delivers its Orc masses alongside a colorful cast of other creatures that will leave you fully satisfied upon their decimation. The biggest challenge of the game is learning the attack patterns and abilities of your enemies, which all differ significantly. Orcs tend to plug along at a steady pace, while creatures like gremlins rush at you and Firebats approach from the sky. Higher level creatures like Gnoll Hunters and Trolls offer even more of a challenge as they can absorb massive amounts of damage and usually need to be handled one on one. Some of the enemies, especially the Gnoll Hunters are pretty annoying and despite adding a challenge can sometimes distract from the fun of watching Orcs gets crushed, zapped or cut into pieces (I know it’s weird, but I like to watch). 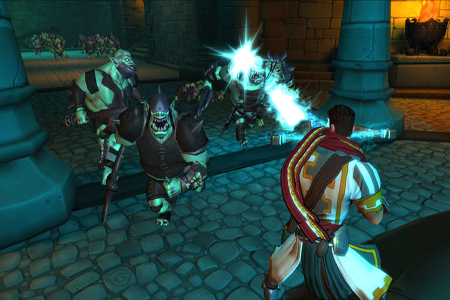 The stylized graphics work really well and remind me of Dragon’s Lair quite a bit. Everything moves really smoothly, though there were a couple buggy camera issues at times, nothing that really impacted the game however. I actually liked the break from super intense graphical pursuits as certain games have shown that a focus on graphics can equate to a crappy game. In terms of sound, I honestly wasn’t paying any attention to the music but the orcs themselves made cool noises when they died so I guess the sound design gets a thumbs up from me.

Orcs Must Die! is incredibly fun, but there are some frustrating aspects that may leave those with less patience a bit peeved. First, while the types of enemies that you’ll be facing are previewed before the mission begins, you aren’t always sure what waves they’ll be featured in and since some are basically immune to certain traps, there is a ton of trial and error needed to complete certain stages. Like I mentioned above, some enemies just seem too overpowered and detract a bit from the setting up traps to impede their progress. Some of the traps themselves may seem a bit useless, but once you discover the intricate scoring system in place you’ll understand why they were implemented. This isn’t a big deal, but players that aren’t willing to seek out a tutorial on the point system may be a bit turned off. That being said, I really enjoy the scoring system though casual players more than likely won’t pursue it (for those interested, check out this link).

Orcs Must Die! is a refreshing and incredibly satisfying splatter fest with a surprising amount of depth and content. Don’t mistake this for a tower defense despite it having a similar set up, though fans of tower defense will most likely enjoy slaughtering fantasy creatures. I can’t recommend it enough, though that may have a lot to do with my racism towards the Orc population.