Silly game purchaser, you thought Mega Release Fall had ended and you were safe? Think again: there are more quality games headed to a downloadable service near you before the end of the year yet. 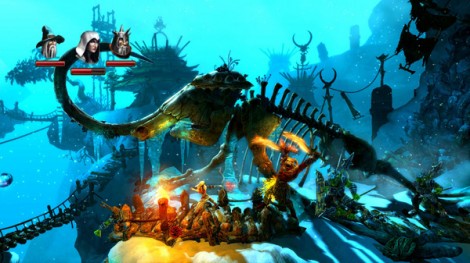 Trine 2 the fantasy action multiplayer platformer (FAMP?) is already available on Steam for Mac and PC users. The first game received critical acclaim and made its way to PS3 as well as PC, but the 360 version ran into publishing issues and never made it out. Console gamers need not fear a repeat performance, as Trine 2 will be available on PSN and XBLA the week of Dec 20th. (G4)

Previously available on PSN, Joe Danger breaks through exclusivity and Joe Danger: Special Edition lands on XBLA on Dec 14th. Excitebike and Trials HD fans should take notice as Joe Danger’s brand of motorcycle stunts make flipping through the air and falling on your face a surprisingly good time. (Joystiq)

PS3 owners get another exclusive HD remake, this time in downloadable form in Oddworld: Stranger’s Wrath HD. This mysterious bounty hunter will be shooting up your download queue on Dec 21st in Europe and Dec 27th in North America.(Joystiq)