For those of you that don’t interact with me on a regular basis, you may be shocked to learn that despite my desire to emit Stallone levels of machismo, I drive a Kia. While it is a sensible vehicle with great gas mileage, it does little to enhance my manhood which is why I was fortunate to stumble upon a game like Renegade Ops, an explosively fun title featuring vehicles that are the complete opposite of my little red douche-mobile.

The game starts out with an order from the super macho General Bryant to storm the beaches of some random tropical island and save the natives from a bunch of jerk-offs in red suits who are in the midst of conquering the world at the request of their psychotic leader, Inferno. This may seem like an odd request until you realize that you’re actually part of a special task force called Renegade Ops (hence the title), a group that has perfected the art of shooting machine guns and missiles from the comfort of their specialized vehicles. Your goal is simple; protect the world from needless death and destruction by causing as much death and destruction as you possibly can.

If you feel like yelling “Go Joe!” at any point of this game, you’re not alone. Renegade Ops is the ultimate tale of really good guys vs really bad guys, which is a pleasant change of pace from the obligatory gray that designers seem to inject into titles these days. Not to say that I don’t enjoy a complicated tale, but it’s comforting to control characters that literally have nothing better to do than save the planet, but not in the wimp Captain Planet way (I love the environment, but set a villain on fire for once Wheeler). 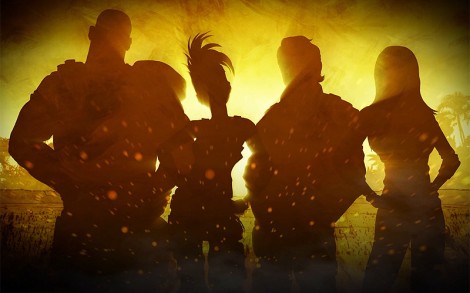 A culturally diverse cast, though PETA may be pissed there are no animals

You can choose one of four characters (I actually played with the Steam exclusive fifth that happened to be Gordon Freeman) all of which have slightly different attribute trees and special weapons. The attribute themselves trees are fueled by a simple system of progression that rewards leveling up with points that can be placed in any number of categories, all of which enhance certain vehicle characteristics like defense or special weapons. While all of the vehicles utilize the same upgradeable machine guns (triple machine guns are as cool as they sound) and secondary weapons (such as missile launcher, flamethrower and railgun) there are enough differences to make each character feel unique and completionist will have fun maxing out all of the character’s levels in pursuit of the perfect combination.

In terms of mechanics, the game harkens back to another classic title as similarities with the Desert Strike series of games are pretty evident, though Renegade Ops is a much faster experience with more of an arcade feel. As you cruise around the levels, you’re given timed objectives which must be met or else it’s game over. These objectives don’t stray too far off the “blow the hell out of everything path” though doing similar missions over and over again doesn’t ever get stale as the game is all action all the time. Secondary objectives are interspersed throughout as well, but they don’t yield much more than higher scores and achievements though pursuing them does add a bit more challenge to a game that sometimes suffers from a lack of consistency in that department. I tended to either not lose any lives throughout a level or lose all of them at one specific point. Because you lose your upgraded machine guns and secondary weapons upon respawn, frustration as a result of being ill equipped was a constant companion. There are certain occasions where you’re given a helicopter to pilot, which really sunk in that whole Desert Strike throwback feel and were actually some of my favorite parts of the game. Which gives me an idea for Avalanche Studios’ next game. 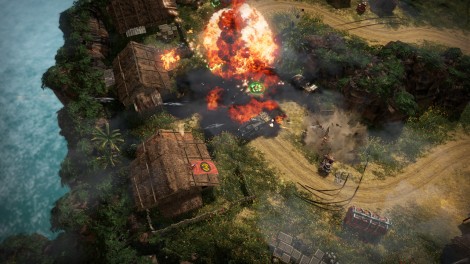 Controls are pretty tight though there is a bit of a learning curve in terms of steering the vehicle as they don’t control like you’d think. The dual stick set up is perfect and being able to escape a sticky situation while continuing chip away at the enemy is always a good thing. I did find that I got caught up on certain cliff faces and navigating certain ramps were tricky but none of this broke the game. I especially liked that falling off the map or getting stuck didn’t cost you a life, which is good when you’re flying around the map at break neck speed trying to finish objectives within the time limit.

Michael Bay eat your heart out

The graphics are absolutely beautiful for the type of game Renegade Ops is and the mayhem that ensues is always entertaining to witness. The details in the fire and explosives alone make it worthwhile to blow things up that may or may not have any mission specific significance but subtle touches like guard towers that crumble via a well timed power slide are also notable.

Even though fighting enemies with the same fashion sense as the British during the Revolutionary War seems a bit goofy, they’re well balanced and each level introduces a new instrument of destruction for you to fill with lead. Even though there are times where a certain combination of vehicles, mainly the devastating tanks and missile launcher trucks, make the game seem unfair you quickly learn that each of them requires a certain strategy and once you’ve figured that out the overwhelming odds seems less so. The game also includes a couple excellent boss fights (including a large warship and battle train) though the end boss is a bit disappointing. 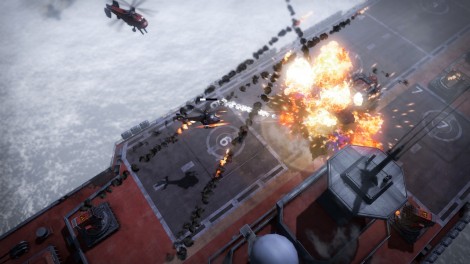 Sorry boat, I have to blow you up, too.

Overall, Renegade Ops is the perfect combination of nostalgia with a modern day edge. A perfect title for a quick session of play or endless attempts at besting the leaderboards. For anyone drowning in narrative, this is one of the best cures for your ailments.