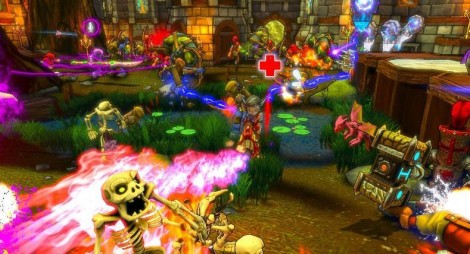 I want to start this article off by thanking Fox News. Up until the day I happened upon their fair and balanced take on journalism, I assumed the world was safe. Sure, the economy is in the crapper and there is a ton of upheaval in the Middle East, but being the Disney-fied and apparently ignorant citizen that I am, I figured all that stuff would just correct itself. Boy, was I wrong. In short, the world is a super-duper dangerous place and there’s an enemy out there that wants to invade our country and squash the American Dream for no apparent reason. Despite the vague references being made to who exactly this enemy happened to be, I figured out what the Fox News anchors were getting at. At any given time, in any given place, our country, no, our way of life could be disrupted by SMWFM (slow moving waves of fantasy monsters).

Dungeon Defenders will be one of the featured games in the Co-op Clash tournament at Horrible Night Out on Dec 9th.

Who are you going to call?

I’ve always been a glass half-full kind of guy, so instead of living the rest of my life under the heavy weight of paranoia, I’ve done my research and discovered that these monsters have a weakness to stationary towers and other static defenses, information that I happened across during my time with the game Dungeon Defenders. In the game, you protect a series of crystals from the above-mentioned creatures by setting up defensive structures such as barriers, poison traps and magical auras as well as direct combat via one of 4 different heroes.

In a recent I Learned Something Today, I spoke about the lessons I gained from Dungeon Defenders in references to home defense. That being said, the real danger is not in defending single domiciles here, we’re talking about protecting towns and large cities, a task that may fare well in some cities over others. I don’t want to incite panic or anything, but while my research revealed the means for combating these vile lifeforms, it also highlighted the glaring weaknesses that a lot of the major US cities have in terms of constructing an adequate tower-based defense strategy. Unfortunately, I found out early on that the issues start pretty close to home, my home in particular.

Those of us that live in the midwest are going to have a ton of complications so in order to assure our safety, we should probably move… Being that I felt I would need to lead the charge in the event of an attack by SMWFM, I analyzed my hometown and Horrible Night’s base of operations in Indianapolis, IN. Suffice it to say, we’re pretty much screwed. Assuming that the SMWFM only utilizes the interstate and highway systems, there are 18 major routes in need of protection. Area of attack towers, mainly those that shot fireballs, would be the only real solid choice here as spreading out multiple towers would be costly and their reach limited to individual creatures. This would not be a problem during the initial waves where the monsters only focus on a couple of routes, but that doesn’t account for the longer assaults at higher difficulty levels. If we have the option of picking a difficulty level, we’ll definitely need to stick to easy but I doubt we’ll get much control. Hitler did not have an easy mode in World War 2. 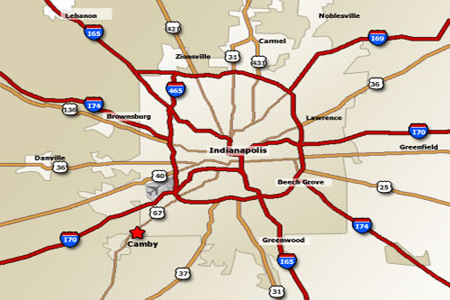 That red could be the blood of our citizens should we not be prepared.

Sticking to the region, Chicago would also have quite a few defensive issues, mostly because of density but it also suffers from the problems inherent to the flatness of Midwestern states in that there aren’t a lot of natural barriers to stymie the flow of baddies. Towers could be placed at the top of the buildings, which would guarantee their safety, but the people on the streets would have little to directly protect them and one can only put up so many movement-inhibiting barriers and slow motion auras before the volume of monsters just became too much. The cost to cover all the many streets of downtown Chicago would be astronomical as I can’t imagine that the US dollar fares well with Mana in terms of exchange rates.

Those occupying mountainous terrain have the best chance of survival, and Pittsburgh seems to be the best place to escape should SMWFM occur. To get to Pittsburgh you essentially have to climb over a mountain or go through one of the few tunnels that lead inside. Not only that, but the downtown is separated from the these entrances by multiple rivers, narrowing pathways further. Now, I’m not completely familiar with Pittsburgh, but the times I’ve been there I’ve commented on how well it would do in case of a zombie attack that originated from outside the city (an internal infection would actually make Pittsburgh one of the worst places to be) and I believe an anti-zombie attack strategy can be altered to fit SMWFM as well. All defenses could be focused at the entrances to the tunnels and back ups at the bridges. While none of the other cities made it very possible to have a couple direct action fighters take on those duties due to the wide expanse of the areas in need of protection, Pittsburgh could because there are very few ways in.

Not So Fast, Captain Cynical

Again, I’m an optimist, so there is a bright side. None of this takes into consideration the proficiency for magic and other medieval combat skills each city holds as those sorts of data were not available to me. This also doesn’t take into account how cooperative citizens are with each other and whether or not they’d be able to mount an offense against overwhelming odds like Kevin did in the Home Alone movies with the aid of a weird old man and a pigeon lady. Philadelphia is the city of brotherly love, which leads me to believe that they’d be able to pull something together because of their feelings for each other. Los Angeles would probably be in trouble though, as I don’t think anyone likes anyone there. 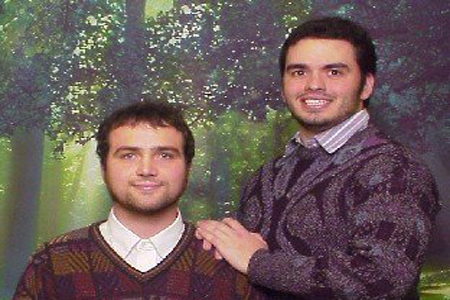 No worries Indy residents, Hittle and I are still here (and we're pretty good at video games)

From a geographical and resource stand point, there are many many places outside of the ones I’ve described that look troublesome on paper, but in concluding this article I realized something. Odds, like red headed step children, are there to be beat. When George Washington invented America, everyone told him he’d get the crap kicked out of him by the British but he refused to quit. He grabbed some of his closest bros and because of their esteem for each other (bromance) they schooled those red coated losers. Sure, the idea of SMWFM is quite scary and maybe you aren’t in the best location but that doesn’t mean that resistance is futile. Move if you want to be on the safe side, but for those that like a challenge hang back, grab some buddies, a sharp object, some tower blueprints and set up shop at an intersection or freeway off ramp. Your city may need you.