When I asked my guidance counselor what college had the best dinosaur program, she gave me a weird look. I explained to her that while some children dreamed of being firemen and doctors, I’d always longed to take on the role of the prehistoric creatures that stomped around the planet millions of years ago. She humored me, explaining that there wasn’t place for dinosaurs in the job market of the future, but having played Primal Rage as a child, I knew better. 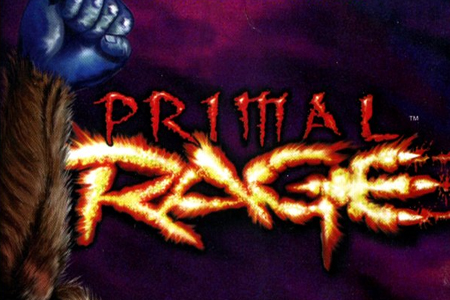 The Lessons of Primal Rage

Dinosaurs are the top job prospects of the future

I learned something today. Contrary to what my guidance counselor assumed, being a dinosaur is indeed a positive career path, especially if a cataclysmic event occurs and plunges the world into a “Neo Stone Age.” Having money or political connections won’t mean squat when you’re at the mercy of a dinosaur king and, seeing as I hate being at the mercy of anything, I want to be that dinosaur king. Sure, business majors have better perks than I do right now, but nothing compares to the perk of being a huge lizard that can just eat the people who make critical assumptions about the viability of his chosen trade. While all those pretentious jerks that said my head was in the clouds are struggling to use their Masters’ Degrees to hunt for food, I’ll be rolling deep with my band of human worshipers, chowing on mammoths and listening to dinosaur-themed rock music. Thanks, Primal Rage.

Hey herbivores, you can get the hell out! 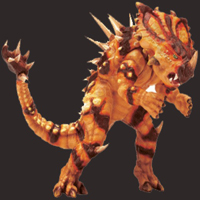 All those sweet spikes are the result of a steady diet of meat and meat-based products.

I learned something today. While people think it’s pretty cool to be a vegan or vegetarian nowadays, that sentiment will be toilet fodder in the Neo Stone Age. If you have the same dinosaur king aspirations that I do, then you’d better develop a taste for super bloody flesh or else face ridicule from the other dinosaur kings. Even the dinosaur kings that resemble herbivores will be eating meat because they understand the connection between being a carnivore and having success in the kickboxing matches that we’ll hold weekly as a means of delegating Neo Stone Age responsibilities. The world is going to be a different place so no one is really going to be impressed with the respect you have for all life because the rest of us will be too busy consuming it. Thanks, Primal Rage.

Respect your worshipers, eat their rivals

I learned something today. As previously mentioned, being a dinosaur king means that humans will flock to you in droves, kind of like groupies (though you won’t be able to have sex with them because your dinosaur weiner/vagina would be too big). While you may not be comfortable with the demi-god status they project on to you, you might as well respect their dedication by not eating them. Despite the chaos, karma will still be floating around a bit, so chowing down on your tiny bros won’t do anything but make you look like a total jerk. That being said, it’s open season on the followers of other dinosaur kings, so don’t feel guilty about filling up your fuel tank with those idiots. They deserve to be eaten if they think their dinosaur king is better than you. Thanks, Primal Rage. 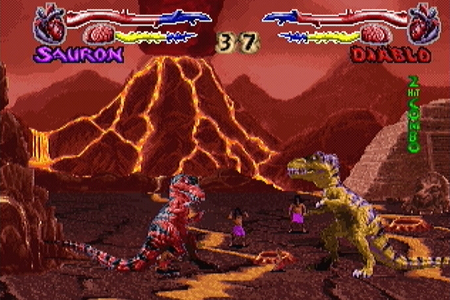 They braved streams of lava to watch you compete, least you can do is keep them out of your mouth

Being a huge dinosaur isn’t enough, you gotta have magic powers

I learned something today. It’s pretty easy to get cocky when you’re fifty feet tall and can take giant poops anywhere without anyone so much as batting an eye, but you’re not the only dinosaur king out there. Someday your reputation may be challenged by a rival, whether in the sanctioned matches I spoke of earlier or during a simple misunderstanding outside a dinosaur king hotspot (like volcano or scary totem pole). Claws and fangs are one thing, but having the ability to breath fire or fart poison gas clouds only solidifies your odds in those match-ups. While no victory is guaranteed in the Neo Stone Age, utilizing all facets of your abilities is the difference between dinosaur king tenure and ending up as an intimidating-but-still-dead dinosaur skull in the giant skeleton graveyard. Thanks, Primal Rage. 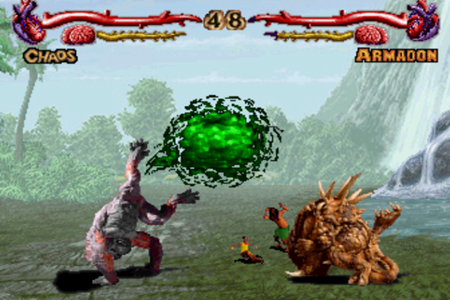 You better duck styracosaurus, this isn't silent but it's quite deadly

Investing, saving, planting trees, all things that don’t make a lot of sense in the short term but are beneficial down the road. Training to be a dinosaur should be added to this coveted list. Sure, you’re going to have to make sacrifices now but if you play your cards right, the human survivors of the apocalypse will be making sacrifices to you. Thanks, video games.