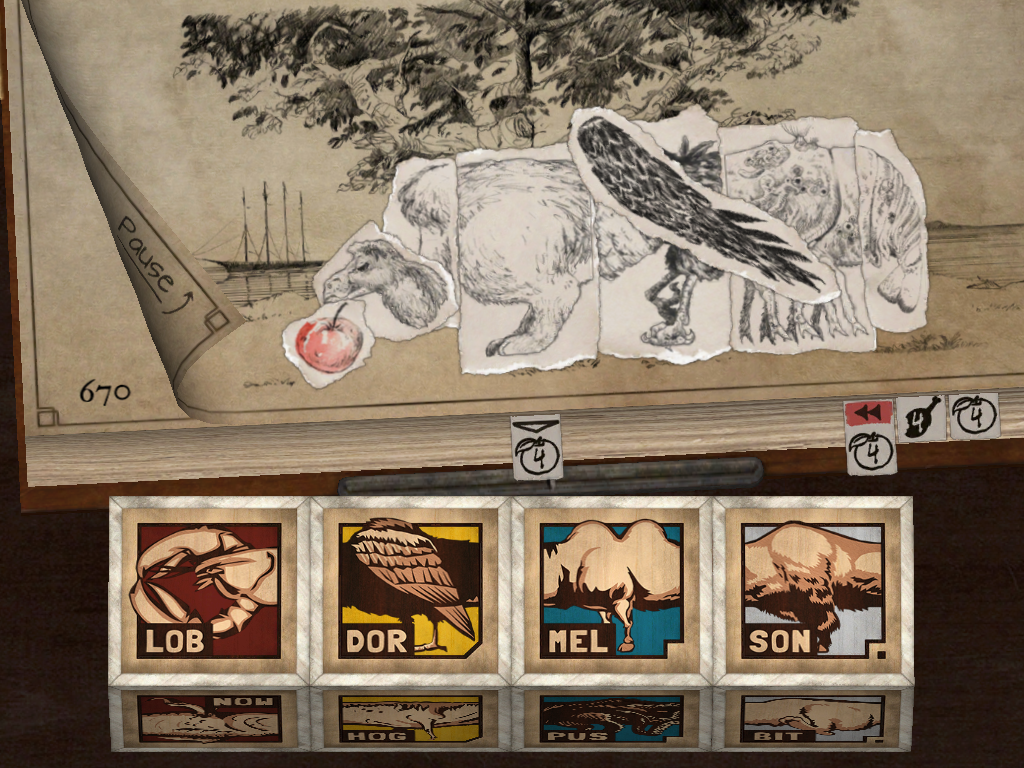 Look out, it’s a Lob-Hog! Or is it a Wart-Ster? I’m not sure, but it’s all a part of Gua-Le-Ni, or: The Horrendous Parade, the inaugural game from Italian game developer Double Jungle. In this new puzzle game for the iPad the idea is to manipulate the order and orientation of a few “taxonomy cubes” which either have an animal head, torso, or backside as well as a piece of the animal’s name on each side in order to match the mixed up beast walking across the screen. This may sound pretty complicated, but it’s quite intuitive once you start classifying!

tax·on·o·my
Biology . the science dealing with the description, identification, naming, and classification of organisms.

It’s like South Park and DaVinci had a baby

In terms of style, this game is gorgeous. The entire experience takes place inside of a scientific journal of sorts. This beautiful volume comes complete with animals sketched on cut-out pieces of paper, a beautifully drawn meadow for the animals to tread upon, and other various flora, fauna, and even alien technology to keep things interesting. Along with the beautiful aesthetics is some great classical music that brings back memories of playing Tetris for hours on end, and a humorous narrator that had me chuckling through the whole introduction and tutorial sections of the game.

One of the very unique things about Gua-Le-Ni is the method in which the gameplay was tested. With a fast-paced action puzzler like this there’s a fine line between a game being challenging and being downright frustrating. To fine-tune the play characteristics, testers were subjected to biometric measures such as facial muscle contraction measurements to determine how the player’s stress level correlated with game performance. I definitely think more games could benefit from this type of scientific testing since some games are so great in theory but then the difficulty level is just completely off-putting.

Tell me what you really think… 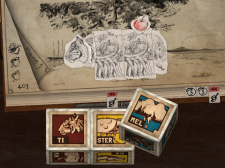 Woah, is that the rare Ti-ster-ster??

Now it comes down to what’s really important in a game. How fun is it to play? I will admit I’m a little mixed in my thoughts about Gua-Le-Ni. Between the concept, the style, and the extensive player testing that Double Jungle did the game is pretty fun. I also love the way you control the cubes. Once you get the hang of flicking, twisting, and tossing the blocks back and forth it feels very natural. The problem for me personally was that I didn’t really have the urge to play it for very long. I found myself wanting more. I wanted to hear more witty phrases from the narrator, wanted to see even more types of animals, and a little more variation in gameplay. Really I just wanted more of the great things that the game had to offer.

Now one can easily go back to the Tetris metaphor and argue that there’s really only one thing to do in that game yet it still draws you in. I think the reason this game feels different from that is that it straddles the fine line between a simple puzzle game and a more complicated, but full-featured one. Once you get past a certain point in the game’s intro “fiction” mode, you unlock a mode called “non-fiction” in which along with classifying the animals, the environment actually affects the creatures in different ways. You can knock fruit from a tree in the background to feed the vegetarian animals and keep them happy, as well as pluck birds from the sky for the carnivores. The problem with this mode is that it took me a good hour of playing to realize that I could do that and make the mode much more enjoyable. With Tetris there’s only one thing you can do and it’s obvious. I think if Gua-Le-Ni cleaned up the interface a bit, and made the introduction and rules for each mode a little more clear and accessible it would help immensely and get people to give it more than five minutes of their time. 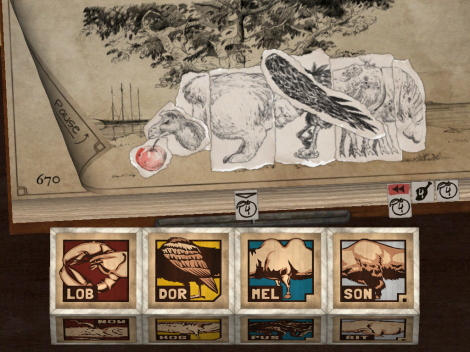 Ultimately I do think this game will greatly appeal to some people, where other people might feel a little slighted by the $4.99 price tag as you actually have to think about whether to buy it or not unlike so many $0.99 priced games. But then I always look at a game’s real value compared to other worldly things. Watch the trailer and see whether you think you’d get at least one coffee’s worth of fun out of the game. I certainly did. Once I really got to know the interface (which does has a few idiosyncrasies such as having to close and reopen the journal before you can play again instead of some type of replay button) and understood the rules to the non-fiction mode I did find myself wanting to go back to it.

I think my biggest dissappointment with the game is that it has tremendous potential and failed to deliver in a few key points that make games like this addictive. Luckily, though, that is part of the beauty of apps these days. These types of problems can be fixed with a simple future update and I hope they do because there is plenty of room for improvement. With the right tweaks, I think people of all ages could get into the taxonomic madness that is Gua-Le-Ni.