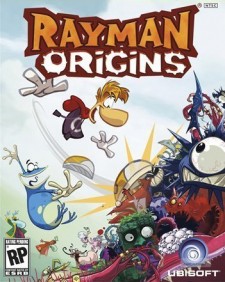 Since moving in with my girlfriend, Magen, and her 3 year-old daughter, Lilly, I have learned a lot about myself. While I knew my video game playing habits were due for an adjustment, I failed to realize just how very few of the games I’ve been playing lately were kid friendly. The worlds around Marcus Fenix and Nathan Drake aren’t exactly filled with Big, Big Friends. When we recently invited Lilly’s young cousins over for a weekend slumber party, I found myself with plenty of game time in front of me but few family friendly options. The kids had the run of the house, so I wanted to be careful with my selection. I had almost resolved to wait until they fell asleep when I wandered into the game demos on Xbox Live and found Rayman Origins screaming for attention.

The kids couldn’t have cared less when I loaded up Rayman Origins as they were keeping themselves entertained with their own movies and toys. Honestly, I just set out to play the game as a trial that I was genuinely interested in playing to see if the game was worth buying. I had been struggling with justifying a full priced 2D platformer from a franchise I had never played. When I loaded up the game for the first time I was immediately struck by how gorgeous it looked and animated. My face was plastered with that same dumb gamer grin I had as a child the first time I played the Atari. As I came to from my awe-coma, I started to notice just how weird-in-all-the-right-ways Rayman Origins is with its odd characters, random songs, and cartoon sound effects. I literally had no idea what I was doing, but I was managing to collect a ton of items while sprinting and bounding through the beautiful levels. I could only surmise from the amount of notifications flying around the screen that were accompanied by triumphant chords that I was doing well, but I didn’t really care as I was just having fun.

After the strange level ending ceremony ended, I came to realize that I had drawn a crowd. All three of the girls, including Lilly, cuddled up next to me, were absolutely enamored with the game. No one said a word, they all just anxiously waited through the loading screen for the next level to appear. This level was a bit tougher and featured a rather large sea monster boss that I wasn’t prepared for and I promptly died. My failure broke the trance and the room was abuzz with questions. Lilly was quick to grasp onto that this was a video game rather than just a movie (thanks in no small part to her iPod games, I’m sure). She wanted to know the name of what I was playing and quickly commanded for me to keep playing more Rayman as she repeated the name to herself for the next few minutes. 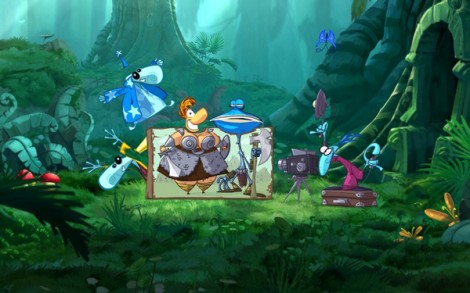 Try not to smile.

Thanks to the girls’ help and insistence that I didn’t quit no matter how many times the “fish monsters” overtook me, Rayman and I eventually succeeded. Sadly after one more level, the demo was over and I had to break the news that the game was done for now. Little did the kids know that their enthusiasm had more than sealed the deal for my purchase of the game the very next day.

Another week or so went by before the cousins came back to visit. I was busy working in my office while the kids were exploring their entertainment options when it was revealed that I had bought Rayman Origins. Little girl scream explosion. When the hollering subsided, we eventually had to find something that all three of them could participate in because not all of them could play Rayman. Unfortunately, the Xbox controllers are too big and the game is too difficult for the two youngest, but I was still taken aback that this game had had such an impact on the entire group, including me.

The next day Lilly and I had Rayman Origins to ourselves and we settled in for the first big play session with the full game. This time though, Lilly wanted to play herself. Being our first attempt with an Xbox game, I set the controller (thank god for wireless technology) in her lap and she was able to use it with two hands, almost like a small laptop. While she struggled with using both sides of the controller at the same time, she wasn’t phased in the slightest. Her face lit up every time she nudged the control stick and Rayman responded by moving in that direction. Then, we discovered the jump button, which let’s face it, is hilarious. To cap off our simple and awesome antics, she was able to move and jump at the same time just enough so that Rayman caught on to a swing above some water. The “swing” itself was a character with a silly face that stretched out its arm to help Rayman, so he quickly became Lilly’s buddy. For the next 10 minutes we didn’t move from this spot. We were on a laughter filled loop of grabbing onto “buddy” and jumping off and splashing into the water. Rinse, repeat, literally. That is until Lilly said out of the blue that she was done and it was my turn. 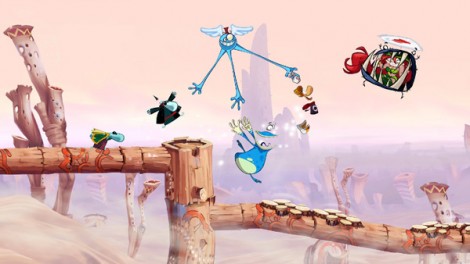 I had one more surprise for her so that she could keep playing and we could see more of the game together. I gave her her own controller so that she could pretend to play alongside of me (a great tip I picked up from Coop), and she couldn’t have been happier. That is until the end of the first world where we came across some giant angry birds that reminded her of her other favorite game which only made Rayman even better in her eyes.

The next morning as we were all going through our routines, Lilly came in to say goodbye before she was off to her grandmother’s, or so I thought. Before I bent down to give her a hug she looked at me and asked, “Can we play Rayman with the Angry Birds?” I’ve never wanted to take the day off of work for video games more in my entire life.

3 Comments → Kid and Play: Rayman Origins is a Crowd Pleaser