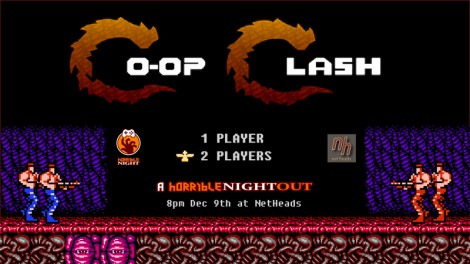 It’s been too long since we all got together for some good gaming. This time we’re going to need to come together because we will be featuring our Co-op Clash tournament! Bring your friends and join us at Net Heads for a Horrible Night Out on Dec 9th at 8pm.

RSVP over on Facebook to guarantee your team a spot and may the best team win.

Can’t join us in person? Not interested in the tournament? There are plenty of other ways to join in on the Horrible Night Out. There will be other game sessions going on at NetHeads including, but not limited to, Battlefield 3, Modern Warfare 3, and Minecraft.

Join us online on Twitch.tv/HorribleNight where we will be posting game info for online game sessions that you can join from your own home on Xbox Live and Steam. Chat with other Horrible Night community members and form your own games, and watch our coverage of the tournament as we reveal the fabulous (?) prizes for the winner of each featured game.

The Games of the Horrible Night Out Co-op Clash Tournament

Net Heads is a locally owned internet and video game cafe with a killer setup for Xbox 360, PC, and Wii gaming. For $10 you can play games the entire night. They have a variety of games on hand as well as snacks, drinks, and beer available on Fridays. Check out our interview with Net Heads to learn more. Gamers can play solo or with friends locally or online. Participation in the tournament is optional. Outside of the tournament we will be playing a combination of Call of Duty: Modern Warfare 3, Battlefield 3, Monday Night Combat, Left 4 Dead 2, Killing Floor, Minecraft, League of Legends, Assassin’s Creed Revelations, Gears of War 3 among others.