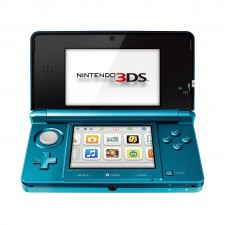 Just for clarification, I bought the black one.

I’ve never been what you might call a “hardcore” handheld gamer. In fact, I’ve only had a passing interest in a few of Nintendo’s offerings. Having owned a few of Nintendo’s handhelds over the years, I always used the systems as supplementary to my main gaming consoles. I’d be really interested in the handhelds immediately after purchase, but soon enough they’d just be moved into the pile of disregarded toys. It’s been 5 years since I last owned a non-phone handheld gaming platform and with the release of some quality software, the 3DS was starting to scratch that long-dormant mobile itch. The itch only lasted a few days before I applied the topical cream known as an impluse buy as I was soon purchasing the 3DS and two of the best games currently available for the system.

The Present and Future

At almost 30 years old, a Nintendo 3DS is not something many people in my age bracket are looking to purchase. Mobile consoles are usually aimed, rightly so, at kids under the age of 18. In general, the systems are more affordable and the games are around $20 cheaper than their home-console brethren. And up until a few weeks ago I was okay with that aspect. I didn’t have any need for the 3DS or a mobile gaming handheld device for that matter. That was, until Super Mario 3D Land came out.

For me to buy a system, I always need a game to help sell the console. Metal Gear Solid made me buy a PlayStation. Shadow Complex compelled me to buy an Xbox 360. Super Mario 3D Land was the game that put me over the edge in terms of buying a 3DS. Granted, Mario Kart 7 (which comes out in December) helped, but in my world of instant gratification, I needed something now, which is why I didn’t wait for the special edition Zelda 3DS that comes out a week from now. (Though I did buy The Legend of Zelda: Ocarina of Time 3D as well.) Since two great games is justification enough for me to buy a console, the fact that there will (hopefully) be some good games on the horizon means that the 3DS won’t be likely be sitting next to my Wii gathering dust anytime in the future.

What About the Past?

Though some might complain about the games Nintendo is currently producing, it is hard to look back at Nintendo’s history without realizing how many great games are in its back catalog. If you just take the Mario and Zelda games, you have hours upon hours of fun and enjoyment without a truly terrible game between the two franchises (3DO games notwithstanding). What Nintendo has developed on the Wii with its Virtual Console service has been shrunken down and included on the 3DS, so even though Nintendo removed the Game Boy Advance port from the 3DS, the ability to still play those games on the console is available because of the e-shop. Granted, you’ll have to pay to play some games you might already own, but I never owned many GBA games and there’s already one Game Boy game that I’m happy to download again (Link’s Awakening).

Not only will I be able to play the old GBA and GB games Nintendo eventually releases, I can go back through the entire DS catalog and cherry pick all the games available for that system. I originally had 3 games for the DS when I first bought it. New Super Mario Bros. (which I will be purchasing again at the behest of my wife who loves that version of Mario), Brain Age, and Mario vs. Donkey Kong 2: March of the Minis. Needless to say there are some games I missed out on. Now they are cheaper! (At least that’s what I’ll be telling my wife. Hey, any justification is good justification right?)

Fresh yet familiar. Looks and plays great on the 3DS.

Handheld consoles aren’t the only ones represented in the e-shop either. With Excitebike 3D, Nintendo has created a new market for its old NES games. I purchased Excitebike right before I started writing this article and it certainly is Excitebike. Nintendo has put a cool 3D twist on one of the great NES classics. One can only hope and dream what Nintendo has in store with its old NES games coming to the 3D platform, which is just another reason for old Nintendo fans like myself to justify owning this cool piece of technology.

Where do I go from here?

Well, after a really busy spending month for me in terms of video games, I think I’ll be taking a break from any major purchases until the new year. That’s not to say that I won’t be asking for games this Christmas but I just won’t be taking any more money out of my wallet…unless there are some awesome games released on the e-shop. Which, by the way, if you buy a 3DS before the end of the year you can download The Legend of Zelda: Four Swords for free. I need someone to play with. If that isn’t a system seller for any of you readers, I don’t know what is.