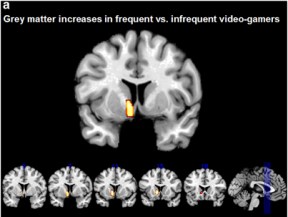 Maybe this is why I always need just 5 more minutes...

Video games are more mainstream than ever, and you can’t become mainstream without making a few enemies in the process. Some of those enemies include those who seek to claim video games can induce addictive behavior. A recent international study on 154 14-15 year old gamers indicates physiological differences in the brain which may present addictive behaviors which can include frequent gaming.

They found that the ventral striatum, part of the dopamine system and implicated previously in addiction studies, was larger in gamers who played more frequently, though the data was strictly correlative and should not be taken as evidence of causality.

The article in TechCrunch makes an interesting statement:

The natural way to spin the story is to say that playing games has affected the brain, though there is no evidence this is the case. In fact, the reverse is more logical: people predisposed to addiction are more likely to participate in potentially addictive activities. This puts video game addiction in the same category as other, more widely-recognized addictions. Co-morbidity with social and anxiety disorders.

In layman’s terms, the brain and certain chemicals may make a person more likely to engage in addictive activities and heightens the chances of actually becoming addicted. The reward systems frequently found in video games may trigger responses in individuals with this physical disposition versus others.

This is much like the “chicken or the egg” struggle handed down from generations. Did the chicken come first or did the egg? Is a gamer potentially already engaging in addictive behavior or did games create the addictive behavior? Logically: if you’re addicted to video games or other activities, you may be born this way. (I apologize for the link, but I couldn’t help it.)

Let me ask you, what is your opinion on video game addiction? Does it exist? The comments are yours below.