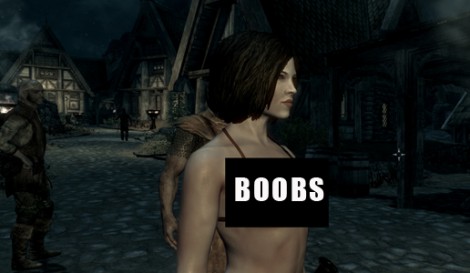 Who cares if it's cold in Skyrim, the people have spoken!

I’d love to review The Elder Scrolls V: Skyrim, but I’m struggling to actually finish any semblance of a quest so I thought instead of that, I’d look at all the different ways that the modding community has worked to make the pants poopingly awesome game even better. PC Gamer already did their 10 Best Mods, but there was an aspect of pretentiousness to their list in that the mods chosen were actually really good mods that improved the game. Sorry supposed PC Gaming experts, mods aren’t about refining an experience, they’re about making all the female characters in the game naked (NSFW only if you have Skyrim at work and take the time to download nudity mods while there).

While there are tons of graphical improvements and performance enhancements too choose from, in terms of my list,  the No More Dirty Bodies mod is the highlight. This mod is for the bods and cleans off the dirt  from the skin of the female races in the game because it’s tough to give yourself an “old-fashioned” with filthy fantasy women as your only visual (don’t worry ladies and dudes with a lifestyle I’m comfortable with, there’s one for Skyrim’s bros as well).

It’s truly amazing what these gifted modders can come up with in such a short time and my fingers are crossed for the enhanced genitalia mod, which if Bethesda had any idea what they are doing, would have been included on the character creation screen (it’s just too tough to accurately model a character after myself without it).