Until recently, open world games had ironically gotten painted into a bit of a corner. The complete freedom of gameplay was limiting the games themselves. It seemed like the genre was going to give way to more linear and focused games that were easy to create year in and year out. However, game designers have risen to the challenge and with the initial sales success of games like The Elder Scrolls V: Skyrim and the announcement of a new entry into the Grand Theft Auto series, the genre only seems to be getting started. We are beginning to see subgenres emerge, and if you wrote off these sandboxes years ago like I had, you are in for a few surprises when you explore how these games have changed over the years. 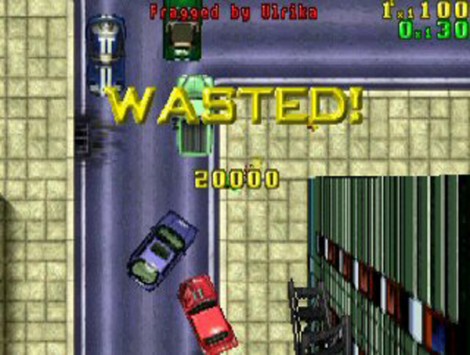 Let's do it again.

I have to give a nod to my original open world game, Grand Theft Auto. It was a watershed moment for me (and many others) as a gamer. For better or worse, I played the game for dozens of hours before I realized there was even a story or goal to the game. I literally just caused mayhem without reason for days because it was so damn fun and the lack of restriction felt completely different from anything else I had played. Once I started actually playing missions and realizing the game had a structure, it felt like two games in one and became an amazing value for me as a game owner. Every other game seemed small in comparison and I couldn’t imagine anyone duplicating Rockstar’s feat or building on this new genre that seemed perfect out of the gate.

Not surprisingly, it was Rockstar who redefined the open world genre when they successfully took the Grand Theft Auto series into the third dimension with GTA 3 and its pseudo sequels Vice City, and San Andreas. In an era of dramatic successes and failures of existing franchises making the leap to polygonal 3D graphics, Grand Theft Auto became arguably the most influential game since Super Mario 64. GTA 3 set the standard for third person action in an open world setting. As technically astounding as the world of GTA 3 was, it would not have mattered if the game wasn’t worth playing. GTA 3 not only successfully evolved the sandbox setting of its predecessors, but it exponentially increased the fun factor. The sandbox gameplay coupled with an intriguing mob story in a city full of character and characters had something for every type of gamer. Driving, shooting, crime, flying, exploration, humor and story all in an exaggerated reality made for countless games within the GTA within Liberty City. GTA 3 became the standard from where the genre and Rockstar would be measured against on into the next generation.

Outside of the big city.

Many experiments and knock-offs later, open world games had stagnated and it seemed like GTA IV was the last hope of breathing new experiences into a redundant genre. With GTA IV and later with Red Dead Redemption, Rockstar established a working formula for the open world mission structure. The game worlds were more alive than ever but the tonality had changed from the escapism prominently displayed in their earlier games. Niko (GTA IV) and John (RDR) were complex protagonists with shady histories, but do-good attitudes. While the game worlds themselves still made it easy to cause wanton destruction, the seriousness of the stories and expressed desires of the main characters pushed the player to do the best with their situation moreso than destroy anything at any time. These two Rockstar games allowed for sandbox gameplay, but the narrative encouraged a much narrower path for the player to the point that random crime sprees and horrific acts seemed out of character for Nike and John and for the world around them. Amazing games in their own right, the new style of the flagship Rockstar games opened up a gap in gameplay that paved the way for different open world games to carve their own niche.

Enter Just Cause and Saints Row. While the initial entries in these franchises struggled to differentiate themselves from the pack, the first games did feature some out of place moments that the later entries embraced as their selling points. In the case of Just Cause, that meant embracing large scale destruction and literally using chaos as a means of progression. Just Cause 2 featured a giant and gorgeous island environment with plenty of explosive options of destruction throughout. On top of the plethora of weapons and air/sea/land vehicle options, Just Cause‘s true hook lay in how the player can traverse the environment outside of the vehicles. That method being the unlimited parachutes in combination with a grappling hook propulsion system, and the ability to go to perform stunts on any vehicle at any time at any altitude or speed. Sure, the story and missions are serviceable, but that’s not the point. Just Cause is built to be a thrilling sandbox that drives the player to try to break the very laws of physics just to see if your character can survive or how much damage you can cause. 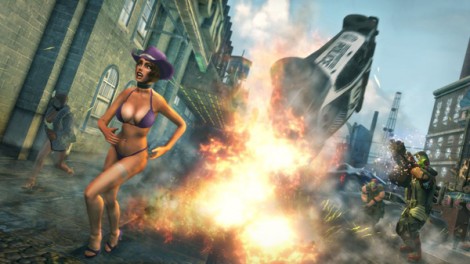 Or we could go further

Saints Row started out as a solid open world game that really was just another GTA clone, but as GTA “matured,” Saints Row took the opportunity to capitalize on its own immaturity. Saints Row 2 (and the recently released The Third) embrace the controversies of earlier GTA’s by turning them on their heads and amping up the ridiculousness to the point that everything about the game is so offensive that it is no longer offensive. I really feel that Saints Row picked up on the fun loving spirit that GTA has left behind in its desire to create deep characters, seedy and realistic environments, and an engrossing story. Saints Row just drives down the street in a human cannon-truck, flipping everyone the bird and shooting random pedestrians with rocket launchers. Saints Row brings us back to why we all hijacked that first car without a purpose when we first realized we could do anything in an open world city, and the genre is better for it.

At the other end of the spectrum are the games that technically exist in open world settings, but the draw to explore the rest of the world and its sandbox options have taken a back seat to the true purposes of the main character. Rockstar and Team Bondi took an even more refined focus on their GTA formula with L.A. Noire. While the L.A. setting is just as alive as past Rockstar games, the options for ridiculousness are pretty restricted, i.e. pedestrians are incredibly agile at dodging even your conscious attempts to run them over. However, there are plenty of side missions and the player does feel a part of the world itself, even if running amok is not the intent of this game. L.A. itself is just as important of a character as any of the others you run across throughout the story and therefore changed the way a lot of gamers viewed open world games.

Pretty damn open for a prison.

I poked fun at the premise of Batman: Arkham City in my review, but the open world environment is essential to elevating the experience of being the Caped Crusader. When it comes down to it, though, the strongest beats of Arkham City take place in its linear sequences. The true open world options of exploring the city, looking for trophies and beating up thugs serve more as a satisfying distraction, but they never cross into the realm of being ridiculous. Rocksteady managed to give Batman freedom, but only the freedom to continue to be Batman. Like in L.A. Noire, this allows the player to progress at his own pace, but the options for entertainment outside of side missions are much more limited than in true sandbox games. L.A. Noire and Arkham City have managed to turn those limitations into a strength to stand apart.

A little more and a little less

Third person action games are no longer the lone entries into the open world genre. First person action games have successfully merged with RPG’s in open world environments. The most traditional example of this was the FPS-turned-RPG, Borderlands. Borderlands took a lot of its mission structure from the questing systems of MMO’s and applied it to a single player and co-op shooting experience. Borderlands does not exist in one vast open world setting, but is instead broken into several large open settings. The player still has the freedom to choose the order in which they complete missions and how to accomplish them, but the open world setting is not nearly as complex as some of the living world models of the GTA family. Rage even further cut away from the Borderlands model into boiling down the open world setting into a hub world for connecting the different missions. Therefore, the chaos factor in these games is much lower, but there is still plenty of freedom to be had without overwhelming the player, which helps Borderlands further distinguish itself from the traditional open world games and other RPGs. 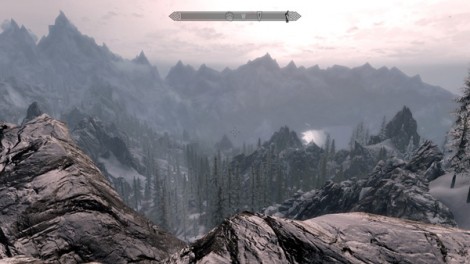 Big enough for you?

For the true explorer, Bethesda has created its own version of open world experiences. Originally The Elder Scrolls series could not have been further from Rockstar’s GTA experiments, but the similarities of the living game worlds have dove-tailed in incredible ways during this generation of games. Skyrim‘s legacy is still being written, but the surprising mainstream success of Oblivion, Fallout 3 and Fallout: New Vegas have already left their marks. These First Person RPG’s may not fit the same sandbox definition of a Just Cause game, but your character can affect the lives of these game world’s inhabitants in some profound ways. Having the choice to wipe out an entire city with a nuclear explosion or to let them ignorantly go about their business brings an entire different set of toys to these impressive playgrounds. The Bethesda games also embrace the design philosophy that allows for several games within the main game itself which drew me to the genre when I was just stealing cars and shooting hookers, except now I’ve traded the cars and hookers for dragons and magic. All of that on top of a memorable narrative experience that makes you wonder just how much can they cram into a video game.

Nowadays, there is literally something for everyone in the open world video game genre. There is such a variety of games and even more variety within the games themselves that it is possible to get your purchase value out of features that aren’t even the true focus of the game itself. I’ve played Just Cause 2 for days just for skydiving, Red Dead Redemption just for hunting bears, and Fallout just for mutant target practice. It may not appear to be the same draw as stealing your first car and seeing how far you can get, but the thrill and freedom are just as primal and fun.