Indiana Jones is a classic movie icon and it’s no surprise this character has inspired so many others to trot around the globe looking for lost treasures and civilizations. Naughty Dog’s Uncharted series really plays like the PlayStation 3’s version of Jones. Nathan Drake oozes charm and humor in similar ways, except the signature whip and fear of snakes has been replaced with a gun and a love of monkey-style climbing. While the first Uncharted was a fun venture in its own right, Uncharted 2 really upped the ante with grander set pieces and tight gameplay that kept me glued to the TV like a child watching Saturday morning cartoons. Although Uncharted 3: Drake’s Deception plays very much like its predecessor, the game still drips with the kind of polish that I bet museums use to keep dinosaur bones looking almost brand new. 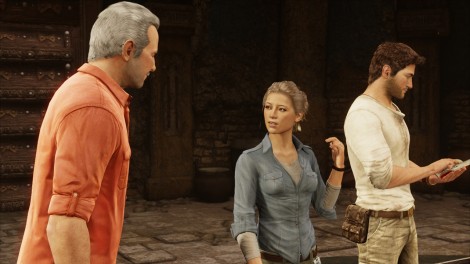 What could go wrong?

Nathan Drake’s latest excursion takes him hopping around Europe and the Middle East to finish Sir Francis Drake’s quest for the hidden city of Ubar, also known as the “Atlantis of the Sands.” This quest is also conveniently tied to Sir Francis Drake’s ring, an artifact that Nathan has worn around his neck since the beginning. While the plot stays mostly interesting, the true stars of the story are the characters themselves. Drake is still as badass as ever, but this time the relationship between Drake and Victor Sullivan, also known as “Sully,” is explored and fans get what I feel is a satisfying answer as to how these two thieves first met.

She's a lot scarier when she's not busy talking to matches.

Other old favorites return, but a good amount of new faces show up to play their parts. Newcomer, yet an apparently old friend, Charlie is a great addition to the line-up of thieves and is just as fleshed out a character as Nathan himself. Katherine Marlowe is the right kind of menacing as the villain, but it’s her main lackey Talbot that had me cursing that guy at every encounter. Seriously, that dude’s a major dick. By adventure’s end, I breathed a sigh of relief that I had shot, groin-punched and jumped my way through several amazing set pieces and survived by the skin of my teeth.

A fistful of bullets

Uncharted 3 takes the running, jumping and shooting from the previous game and continues to hold true to its established third-person shooter feel. The biggest change found here is in the melee combat system. Drake dials back his “murdering tons of nameless thugs” tendencies and does a lot more talking with his fists. There are also moments where Drake will physically interact with the environment during fights that got my adrenaline going, such as slamming a guy into a wall or breaking a bottle over another guy’s head for the take-down. In fact, the entire game is teeming with this level of detail whether it be clothes getting wet from swimming or Drake reaching out to touch a wall as he runs by. It really sells the idea that these characters are real. 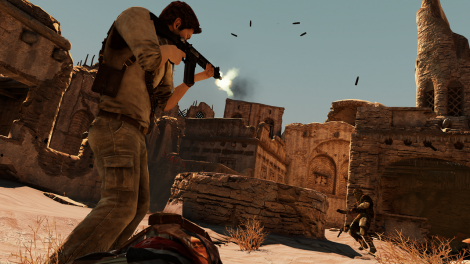 The days are filled with hot lead, but the nights are so cold.

Another change is that the guns have very noticeable recoil this time. This can be a double-edged sword as it means it’s worthwhile to make shots count, but Drake seems like less of a gun expert after all of the fire fights in his last adventure. In fact, if I had two major criticisms of the entire experience, it would be that the gameplay doesn’t seem to evolve much by the final confrontation and that some of the gunfight scenarios can get ridiculously frustrating. However, what’s found here is mostly enjoyable and worthy of the Uncharted name.

Uncharted 3 is, without question, a beautiful game. From the moment Drake first walks amongst the trees in the French countryside and the sunlight pours down between the branches and leaves, I knew I was in for a real visual treat. The world is just filled with amazing detail that makes it feel alive. A battle on an ocean liner bobs and sways as waves crash against the hull. Drake’s footprints in the sand as he scales the dunes made me just almost want to be there in the desert with him, even though rumor has it that it’s really hot. The audio experience is no slouch, either, with each gun sounding unique, the characters all being extremely well-acted and every explosion feeling like its own “OH CRAP!” moment. The whole package was amazing before and, no surprise, it remains amazing. 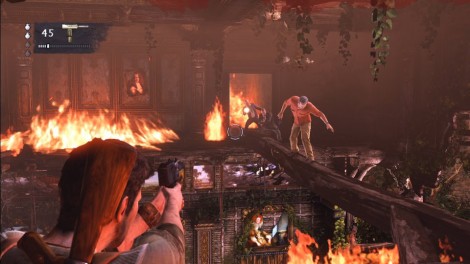 Multiplayer is like this, but with more teens questioning your sexuality.

Whether or not it’s necessary for Uncharted games to include multiplayer, I have latched on to the experience due to a shared interest with friends. It’s possible to waste away dozens of hours here ranking up, unlocking guns, skins & boosters (helpful perks like climbing faster) and customizing your character to match your own play-style. While Uncharted 2 had a few maps that had dynamic events, Uncharted 3 goes all out. The chateau catches on fire, a sandstorm rolls into a desert village, and players fight to take control of a plane as it roars down the runway. Players can create emblems for themselves and these icons get plastered onto set locations around the maps, sometimes based on who is currently playing the best. There’s even a buddy system that allows players to spawn next to a teammate and celebrate kills with high fives! It’s all pretty damn cool and gives the game incredible style across the board.

To chart or not to chart

Even without the additional multiplayer hours, Uncharted 3 provides a high-quality story experience from beginning to end. It can be finished in around 8 hours, but there are multiple difficulty settings and a ton of hidden treasures to find. This is the kind of game that belongs in a PS3 owner’s collection to show to friends on the fence about purchasing the system. Naughty Dog hit it out of the park last time and has done it again, even if that amazing hit feels like it landed just inches short of the same spot.