A large company tried to shut down our Shiniest Objects lifeblood, but we will survive! This week, gaming’s biggest franchise returns, studio troubles and acquisitions, plus that war game sold a lot. We started off our week kinda scared from the best holiday, confused by our lack of game type, and left you with home defense tips.

Every day we are on the look out for the most interesting news items in the gaming industry. Some make it on the site as headlines, and the articles that just miss the cut end up in the Shiny Objects feed. Every Monday we recap the shiniest of the objects, and our original articles from the previous week. Due to some recent changes with Google Reader, our Shiny Objects feed is currently unavailable while we explore a new solutions. In the meantime, we will continue to recap the week’s highlights here. 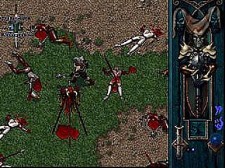 25 headlines distracted us and here’s the best from that list:

The Grand Theft Auto V Trailer: What Did You Think? – Giant Bomb
So that happened.

The Lord of the Rings: War in the North review: Middle-earth revisited – Joystiq
Do I have space for a “good” game this season?

PAX East Registration is open, go buy your ticket – Destructoid
Who is up for a trip to Boston?

Lego Universe will end in January 2012, offices closing – Joystiq
This makes me more sad than it should.