When you think about dynamic duos, names like Batman and Robin or Chip and Dale immediately come to mind. After playing through Magical Time Bean’s Escape Goat, the terrible twosome of Goat and Mouse may soon join the aforementioned heavyweights in the ranks of “World’s Greatest Bad Ass Partnerships.”

You look like you are doing something crazy… I’m in

When Escape Goat begins, our goat hero (who I assume is named Goat) has been accused of witchcraft and sentenced to life in the Prison of Agnus, a 2D version of Alcatraz minus the safety regulations. Rather than rot away deep underground, Goat takes it upon himself to escape the prison by navigating the elaborate obstacles that stand between him and freedom. Things look pretty grim from the onset as the different rooms within the prison are filled with horrible things like saw blades, electricity and baddies called “Reapers” which shoot fireballs and have quite the disdain for hooved animals. Fortunately for Goat, a mouse (again, let’s call him Mouse) sees the perseverance of his tin can chomping cellmate and decides to tag along on the perilous journey. 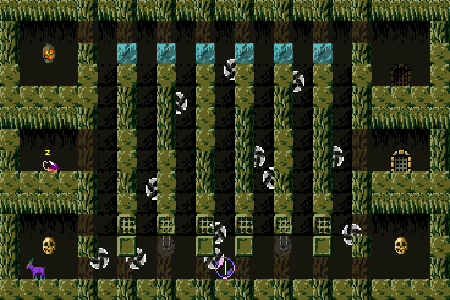 They really don't want me to get out of here, my reputation for escaping is wide spread

It’s the relationship between Goat and Mouse that really sucked me into the game and highlighted my experience with a genre that I tend not to like very well. The obstacles and puzzles have a Super Meat Boy feel too them without the overwhelming difficulty (though it is tough at times), but it’s the utilization of each of the character’s unique abilities that makes the game stand apart from other retro platformers. You are in direct control of Goat, whose skill set includes a double jump and a dash move that allows for the destruction or movement of environmental objects as well as a means of quickly moving from point A to point B. Mouse, on the other hand is summoned to a particular area and can move through small openings, though your control of his movements are limited to the direction you send him in to begin with. Certain stages have a magical hat power-up, which allows Goat to teleport to whatever location Mouse is currently at, thus opening up areas to Goat that were previously inaccessible due to his size. The act of teleporting can also destroy Reapers, which comes in handy during the later stages when there’s a surplus of the flame spewing baddies.

So many rooms and not a bathroom in sight

The game is comprised of multiple areas with 6-10 rooms each, all with a particular theme that defines the sorts of obstacles you can expect. The goal of these rooms is to find all the keys in order to unlock the gate that blocks your progression. The interesting part of the Escape Goat is the way each of the rooms play out. Some are more oriented around solving puzzles while others feel more like traditional platformers. This really helps to keep things fresh but doesn’t switch things up so much that the flow is interrupted (an insanely important mechanic in this type of game). Like previously mentioned, the difficulty never gets out of hand despite the sometimes intimidating appearance that the rooms can have. 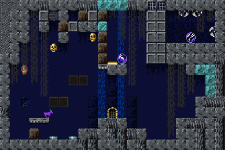 At least my captors left keys around in convenient bubble form

At the end of each series of rooms is a rather plain area that contains a sheep, who apparently got accused of some inane crime as well. Rescuing these sheep allow you to open up further areas in the prison hub, ultimately leading to your salvation. While these sheep rooms are a relief at times (especially after a difficult level) I feel that they would have had more impact as grand finale of sorts to each series of rooms as opposed to what amounts to a freebie. Still, there is something charming about expecting the worst and ending up with a wool covered buddy.

Despite the retro appearance of this game, it feels like a modern-day platformer with its constantly changing environments and precise controls. There was never a time that I felt a room was cheap or the controls lead to my death, which was always my issue similar puzzle platformers. I’ve said this about games in the past, but it holds true to Escape Goat in that the ease of use makes me feel like I’m much better at games than I actually am. I like that.

The soundtrack of Escape Goat is one of the biggest surprises of the game as it was very well done and sets the dungeon navigating mood perfectly. Sound design is an often times overlooked, especially in indie games but having experienced quite a few stellar indie soundtracks as of late, it looks like the little guy is leading the charge. The coolest thing is that the soundtrack is available for free on Bandcamp (but you should donate) so you can imagine you’re running through subterranean prisons while walking to the grocery store.

I have very few complaints with the game that have anything to do with things outside my own personal preference (in all honesty, I’d rather fight than escape). The game was a bit short (I finished it in around 3 hours) but the inclusion of a level editor and the low price of 240 MS points more than makes up for it. There isn’t a whole lot separating the game from similar platformers and the charm of Goat and Mouse may be lost on those looking for an extreme challenge.  I think my biggest issue with Escape Goat is that I’m kind of obsessed with Goat and Mouse and have no idea why. Should Magical Time Bean decide to make stuffed animals or costumes of the two animal heroes, I want them. All. For free! 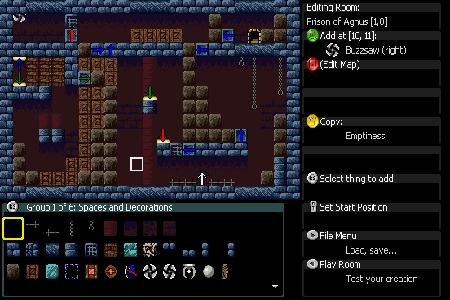 Challenge your friends to a game of drunken Escape Goat level creation!

With Epic Release Fall raining down eye-popping visuals and engrossing narrative all over the place, you’ll probably want a quick time out and Escape Goat is the perfect game to give you some much needed AAA respite (though don’t be surprised if you linger in Agnus longer than expected).

Buy it on Xbox Live Indie Games for 240 MS