Remember that amazing looking Mechwarrior trailer Piranha Games released in 2009? Almost two and a half years later, we finally get an official website – www.mwomercs.com, a launch date and a few big changes. 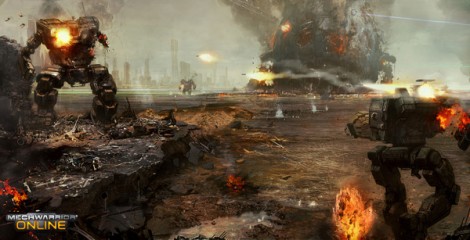 The new title of the game is MechWarrior Online and it will be a free-to-play PC-only offering. A release date has been set for the second half of 2012 with publishing to be handled by Infinite Game Publishing. The online game modes will range from 1v1 battles to team based Conquest and VS modes. It also seems to have several MMO trappings such as guilds (Mercenary Corps), a leveling system, and some form of persistent faction progress. There has also been a shift in the setting as well, with the game now taking place in 3049. For Battletech fans, you know this means the arrival of the Clans in the Inner Sphere.

A few new pieces of concept art are the extent of new media released so far, so we don’t yet know whether the original trailer is representative of what the game currently looks and plays like. However, based on this interview with PC Gamer, it seems Piranha was definitely inspired by the gameplay in previous Mechwarrior games. They will even be including joystick support (my x52 thanks you).

If you’ve never played a Mechwarrior game before, you should head over to MekTek where you can download the full version of Mechwarrior 4 for free. Or, if you require Super Shiny Graphics™ and own a copy of Crysis Warhead check out the excellent Living Legends mod.

Of course, if you were hoping to get your big stompy mech fix on the 360 your best bet is now Hawken.